Altair your guide to small constellations 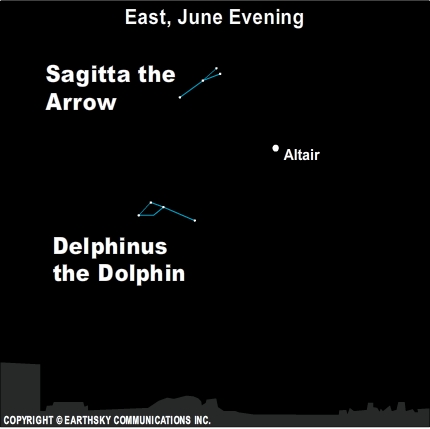 Look in the east on a June evening to locate a sparkling blue-white star not far from the horizon. It’s the star Altair in the constellation Aquila the Eagle, and it’s the second brightest star in the Summer Triangle. It’s a wonderful star in itself (read more about Altair here), but, for the moment, let’s talk about Altair as a guide to two small constellations. Little constellations typically have very distinctive shapes. That’s true of Delphinus the Dolphin and Sagitta the Arrow. Vulpecula the Fox is in this part of the sky, too, but its shape is not so distinctive. 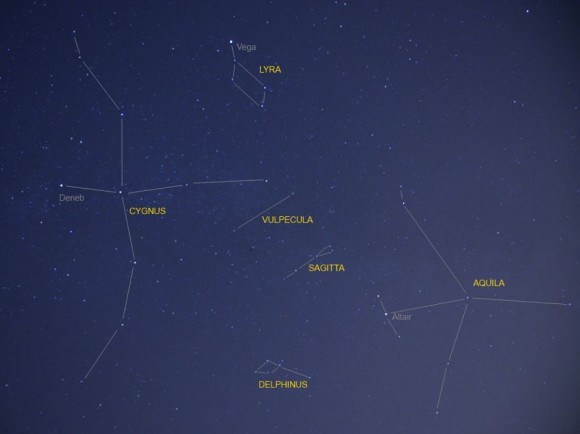 Annie Lewis in Madrid, Spain captured the little constellations – Sagitta, Delphinus, Vulpecula – between the brighter stars of the Summer Triangle. Thank you, Annie!

Two fingers held at an arm length cover over, or nearly cover over either Delphinus or Sagitta. Even so, it is surprising how well these little star patterns stand out in a dark country sky. How many Dolphin stars can you see? One story claims that there are nine visible stars in Delphinus, said to represent the nine muses.

Meanwhile, according to Greek sky lore, Sagitta is the arrow used by Hercules to save Prometheus from having his liver torn out by Aquila the Eagle.

Bottom line: Use the bright star Altair to find these some small constellations in the June night sky. Delphinus the Dolphin and Sagitta the Arrow have distinctive shapes and are really pretty easy to spot. Vulpecula the Fox is harder, but you can see it if you try.