Amateur astronomers across the globe have been watching a star brighten on the dome of our night sky. You can try to spot it, too. Use the photo here as a finder guide to locate the nova named V1405 Cas. 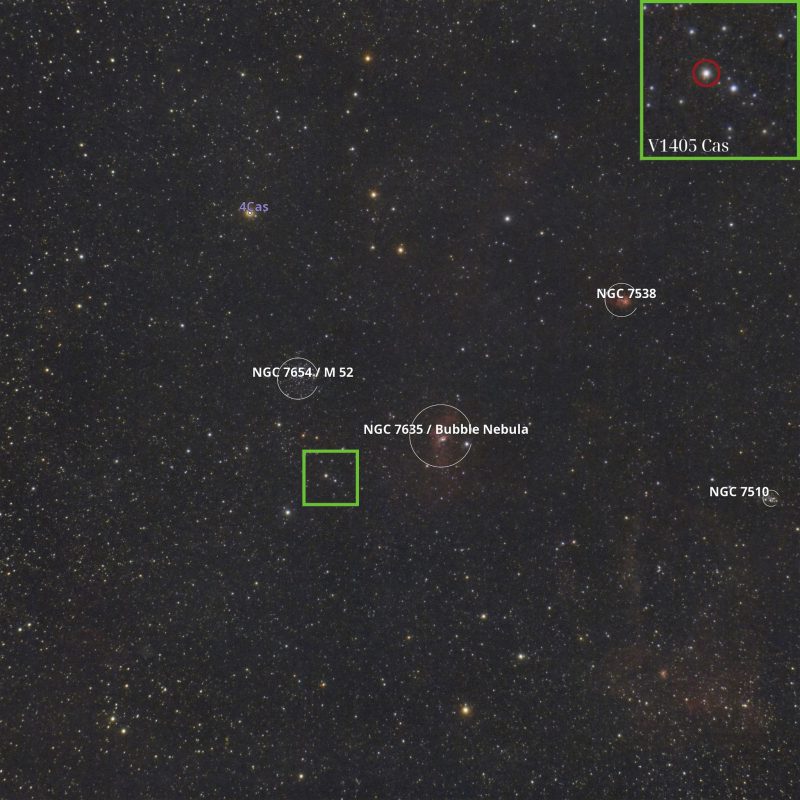 View at EarthSky Community Photos. | Tara Mostofi in California and Alexandru Barbovschi in Moldova collaborated on this image of a nova – a star that brightens suddenly and dramatically – on March 21, 2021. The nova is called V1405 Cas. You’ll see it inside the green square (and inset) on this image. Thank you, Alexandru and Tara!

Japanese photographer Yuji Nakamura spotted a nova located in the direction of the constellation Cassiopeia the Queen on March 18, 2021. At that time, this light in our sky – which has been named V1405 Cas – was shining at about magnitude 9.6, much too faint to see with the eye. Just a few days later, though, the nova had brightened to about magnitude 7.6, making it bright enough to be visible with binoculars. That’s around the time Alexandru Barbovschi in Moldova teamed up with Tara Mostofi in California to capture the image seen above. If the nova continues to brighten, those with keen eyesight might be able to spot it without optical aid before it fades away again. Bright novae are fairly rare, so – especially if you have binoculars or a small telescope – get out and see this one while you can. Alexandru Barbovschi wrote:

In the light of the recent news about a nova going off in the Cassiopeia constellation, a desire to photograph it appeared. Sadly, weather is not permitting currently in the Republic of Moldova. So I asked my good friend living in California, Tara Mostofi, to shoot it for me and I would take care of processing it. We have very similar setups (same mount and OTA, but different cameras), which means that I would get a similar result. Only 14 proper light frames were collected, but it was enough to create a nice picture and actually capture the nova!

… It feels exciting to know that even bad weather can be overcome.

Use the photo above and maps below as a guide to starhop your way to the nova. Start with a small telescope or binoculars to help guide you to the right location. After it gets dark, look northward to spot Cassiopeia. The constellation is often described as a W, although at the moment the letter shape is on its side, and it actually looks more like a chair, which fits its original description of a queen sitting on her chair. Take the bottom two stars in Cassiopeia and use them to draw a line. Extend the line to the right (north) for approximately the same distance as the two stars are apart from each other and start looking for a little star cluster known as M52. Then look just off of M52 and use the map to pinpoint the nova. 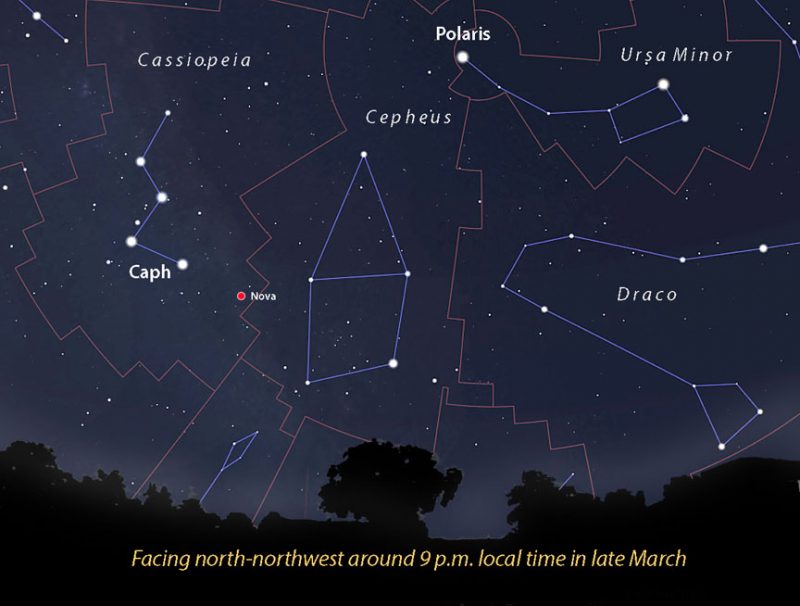 Follow the bottom 2 stars in the M- or W-shaped constellation Cassiopeia to find the new nova. Image via Bob King/ Sky & Telescope.

If you’re using binoculars to spot the nova, imagine the right side of this map as the bottom of your sky, closest to the horizon. The flattened diamond shape at the top of this photo, known as Cassiopeia’s rhombus, can help zero you in on the right region of sky. If, as you scan to the right of the bottom two stars in Cassiopeia, you stumble across the rhombus, you know you’re in the right area and you’ve gone a little too far, so back up and look to the left for the star cluster M52 and the nearby nova. 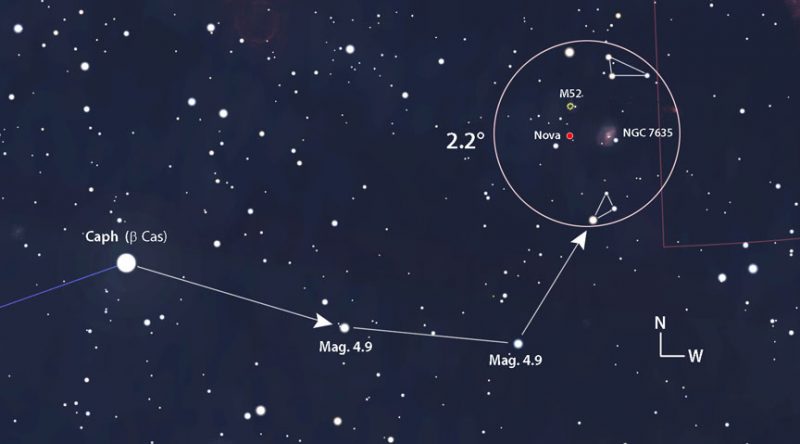 You can star hop from moderately bright stars to the nova as shown here. Image via Bob King/ Sky & Telescope.

This object is a classical nova, meaning it apparently resulted from interactions in a binary star system, consisting of a white dwarf and a sunlike star. The white dwarf siphons off material from its companion until the white dwarf heats up enough to blast material outward, creating the brighter light that we can spot across space.

Novae are rare. One of the last novae that could be spotted without optical aid was in 2013 in the constellation Delphinus, so take advantage of this nova while it lasts! As usual, your best views will come in a dark sky.

Bottom line: Amateur astronomers across the globe have been watching a star brighten, and you can try to spot it, too. Use the photo and charts here to locate the nova named V1405 Cas.