White dwarfs are dead stars. A single white dwarf contains roughly the mass of our sun in a volume no bigger than our planet. Our sun will become a white dwarf someday. 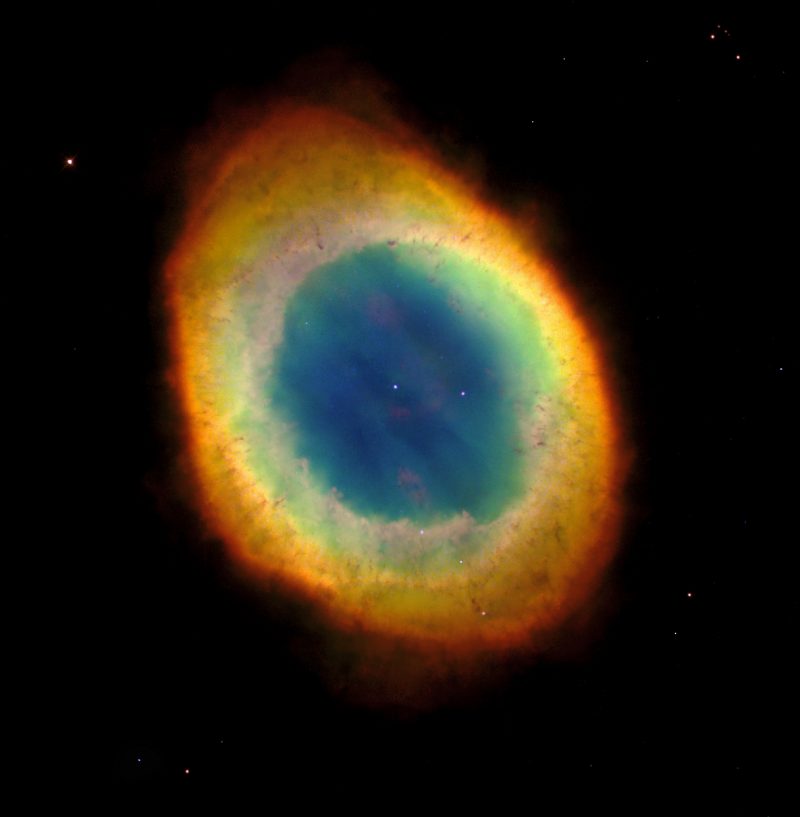 View larger. | The Ring Nebula (M57) in the constellation Lyra shows the final stages of a star like our sun. The white dot in the center of this nebula is a white dwarf; it’s lighting up the receding cloud of gas that once made up the star. The colors identify various elements like hydrogen, helium, and oxygen. Image via The Hubble Heritage Team (AURA/ STScI/ NASA).

White dwarfs are the hot, dense remnants of long-dead stars. They are the stellar cores left behind after a star has exhausted its fuel supply and blown its bulk of gas and dust into space. These exotic objects mark the final stage of evolution for most stars in the universe – including our sun – and light the way to a deeper understanding of cosmic history.

A single white dwarf contains roughly the mass of our sun in a volume no bigger than our planet. Their small size makes white dwarfs difficult to find. No white dwarfs can be seen with the unaided eye.

The light they generate comes from the slow, steady release of prodigious amounts of energy stored up after billions of years spent as a star’s nuclear powerhouse.

White dwarfs are born when a star shuts down. A star spends most of its life in a precarious balance between gravity and outward gas pressure. The weight of a couple octillion tons of gas pressing down on the stellar core drives densities and temperatures high enough to ignite nuclear fusion: the fusing together of hydrogen nuclei to form helium. The steady release of thermonuclear energy prevents the star from collapsing on itself.

Once the star runs out of hydrogen in its center, the star shifts to fusing helium into carbon and oxygen. Hydrogen fusion moves to a shell surrounding the core. The star inflates and becomes a red giant. For most stars – our sun included – this is the beginning of the end. As the star expands and the stellar winds blow at an increasingly ferocious rate, the star’s outer layers escape the relentless pull of gravity.

As the red giant star evaporates, it leaves behind its core. The exposed core is a newly born white dwarf. 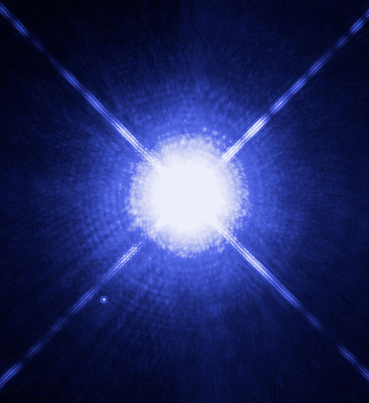 The white dwarf consists of an exotic stew of helium, carbon, and oxygen nuclei swimming in a sea of highly energetic electrons. The combined pressure of the electrons holds up the white dwarf, preventing further collapse towards an even stranger entity like a neutron star or black hole.

The infant white dwarf is incredibly hot and bathes the surrounding space in a glow of ultraviolet light and X-rays. Some of this radiation is intercepted by the outflows of gas that have left the confines of the now dead star. The gas responds by fluorescing with a rainbow of colors called a planetary nebula. These nebulae – like the Ring Nebula in the constellation Lyra the Harp – give us a peek into our sun’s future.

The white dwarf now has before it a long, quiet future. As the trapped heat trickles out, it slowly cools and dims. Eventually it will become an inert lump of carbon and oxygen floating invisibly in space: a black dwarf. But the universe isn’t old enough for any black dwarfs to have formed. The first white dwarfs born in the earliest generations of stars are still, 14 billion years later, cooling off. The coolest white dwarfs we know of, with temperature around 4,000 degrees Celsius (7,000 degrees Fahrenheit), may also be some of the oldest relics in the cosmos. 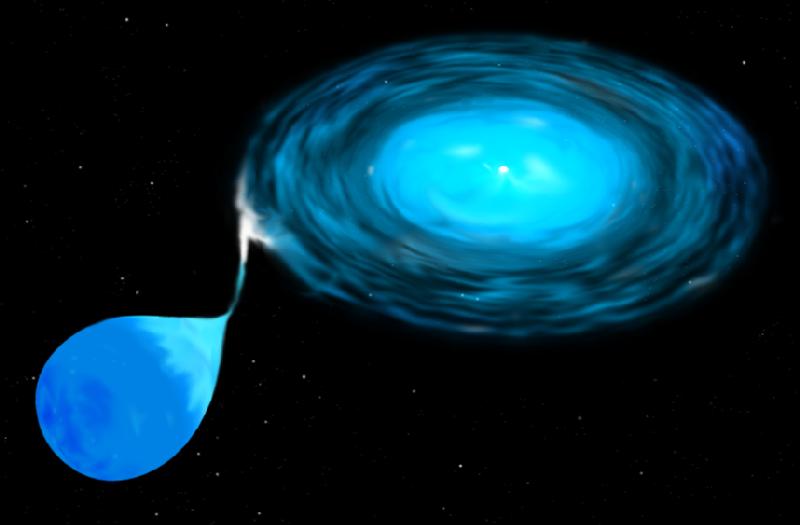 An artist’s rendition of a white dwarf siphoning gas off a binary companion into a disk of material. The stolen gas spirals through the disk and eventually crashes on to the white dwarf surface. Image via STScI.

If the gas collects fast enough, however, it can push the entire white dwarf past a critical point. Rather than a thin shell of fusion, the whole star can suddenly come back to life. Unregulated, the violent release of energy detonates the white dwarf. The entire stellar core is obliterated in one of the most energetic events in the universe: a Type 1a supernova. In one second, the white dwarf releases as much energy as the sun does in its entire 10 billion year lifetime. For weeks or months, it can even outshine an entire galaxy. 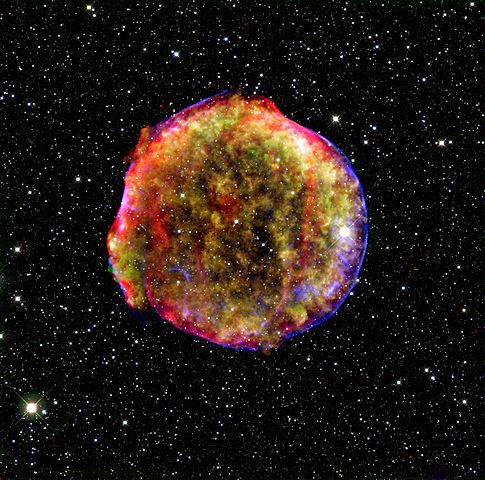 SN 1572 is the remnant of a Type 1a supernova, 9,000 light-years from Earth, that Tycho Brahe observed 430 years ago. This composite X-ray and infrared image shows the remains of that explosion: an expanding shell of gas moving at roughly 9,000 km/second (over 20 million miles/hour)! Image via NASA/ MPIA/ Calar Alto Observatory/ Oliver Krause et al.

Such brilliance makes Type 1a supernovae visible from across the universe. Astronomers use them as “standard candles” to measure distances to the farthest reaches of the cosmos. Observations of detonating white dwarfs in distant galaxies led to a discovery that netted the 2011 Nobel prize in physics: the expansion of the universe is accelerating. Dead stars have breathed life into our most fundamental assumptions about the nature of time and space.

Bottom line: White dwarfs are the remnants of dead stars. They are the dense stellar cores left behind after a star has exhausted its fuel supply and blown its gases into space.