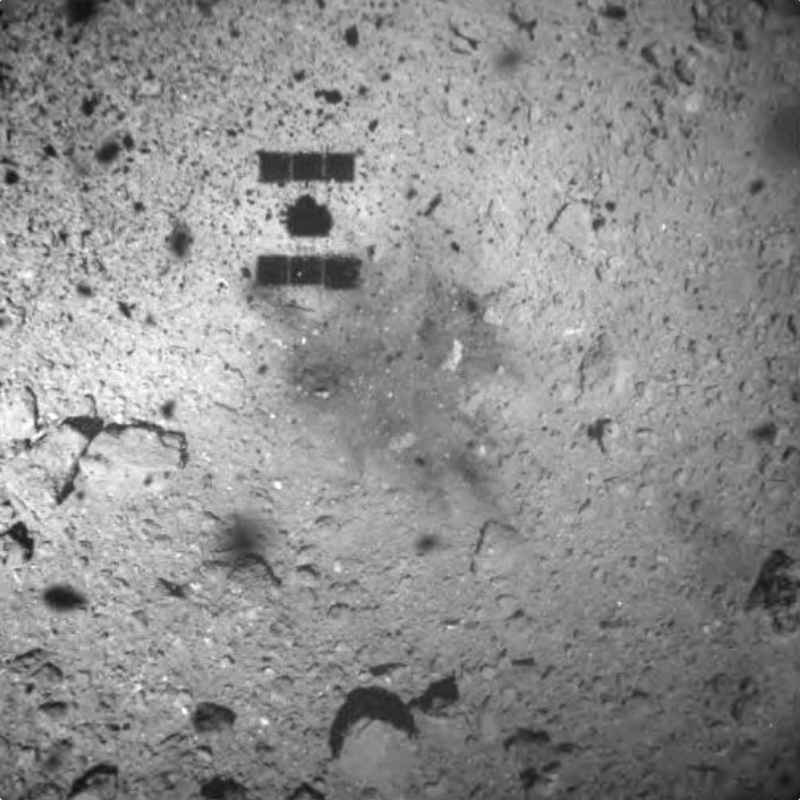 Japan’s Hayabusa2 spacecraft captured this image last week during its ascent after touchdown on asteroid Ryugu. You can see the shadow of Hayabusa2 and a region of the surface of the asteroid apparently discolored by the touchdown. Image via JAXA (@haya2e_jaxa on Twitter).

The Japan Aerospace Exploration Agency (JAXA) released this image this week, following its February 20 to 22 touchdown operation on the surface of distant asteroid Ryugu. Japan’s Hayabusa2 spacecraft performed the brief touchdown, and its wide-angle Optical Navigation Camera captured the image as the craft was ascending again from the asteroid’s surface. The spacecraft’s shadow is cool to see! All this is happening 200 million miles (300 million km) from Earth, after all. Even more interesting – to space scientists – is the discoloration on the asteroid’s surface. See it? That large, irregular, dark spot? The scientists said the spot could have been caused by grit being blown upwards by the spacecraft’s thrusters, or by the “bullet” the craft fired into the asteroid’s surface in order to puff up dust for sample collection. Hayabusa2’s mission is to collect samples of rock from asteroid Ryugu for eventual delivery to Earth.

This is an image captured just after #haya2_TD! It was taken with the wide-angle ONC-W1 onboard camera and shows the shadow of Hayabusa2 and a region of the surface that seems to have been discoloured by the touchdown. https://t.co/PEE6wfjDHE pic.twitter.com/UQoTNIQgIh

Last week’s initial touchdown on the asteroid’s surface was said to be a complex procedure that nonetheless took less time than expected and appeared to go without a hitch. The firing of the bullet into the asteroid’s surface was the first of three such firings planned for this mission. Hayabusa2 mission manager Makoto Yoshikawa commented last week that he believed this technique for sample return would:

… lead to a leap, or new discoveries, in planetary science.

Read more via the BBC