Times in EDT for Tuesday morning’s total eclipse of moon

Save this chart! It’s the times in Eastern Daylight Time for Tuesday morning’s total eclipse of the moon. 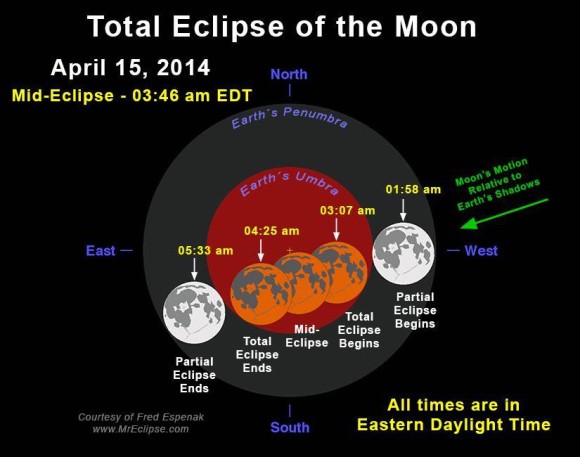 Mars brightest in six years on eclipse night
Earth passed between Mars and the sun on April 8. Our two worlds are closest on April 14. On that night, Mars is near the moon at the time of the total eclipse. Red Mars and red moon. It doesn’t get any better. The star Spica is nearby, too.

A Christian astronomer talks about Blood Moons
Some books say the upcoming series of eclipses is a harbinger of dire events. Jay Ryan, astronomer and Christian, explains why he’s not persuaded that Blood Moons are a sign of apocalypse.

How to watch a total eclipse of the moon
A total lunar eclipse is one of the most dramatic and beautiful – and easiest-to-view – of all astronomical events.