How to watch a total eclipse of the moon

Are you planning on watching the January 20-21 total eclipse of the moon? Here are some tips. 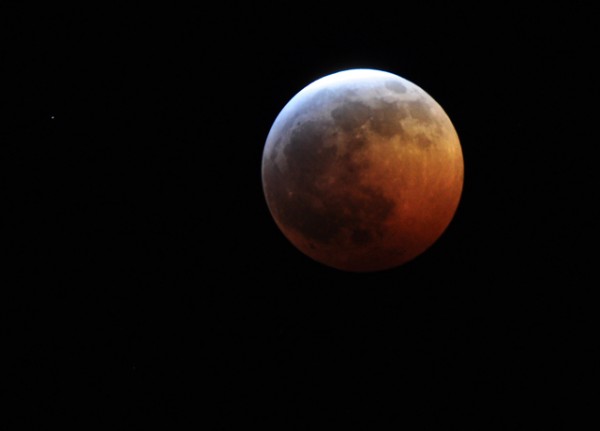 A total lunar eclipse is one of the most dramatic and beautiful – and easiest-to-view – of all astronomical events.  During a total lunar eclipse, the sun, Earth and moon form a line in space. Earth’s shadow falls on the face of the moon. An entire hemisphere of Earth can see the eclipse, that is, the whole side of Earth on which it’s nighttime when the eclipse takes place. No special equipment needed. Just grab your lawn chair, go outside and plan to spend several hours watching the partial phases of the eclipse, followed by the totality itself, when the moon is completely covered by Earth’s shadow.

A total lunar eclipse is one of nature’s grandest spectacles. Here are some tips that can help you enjoy it. 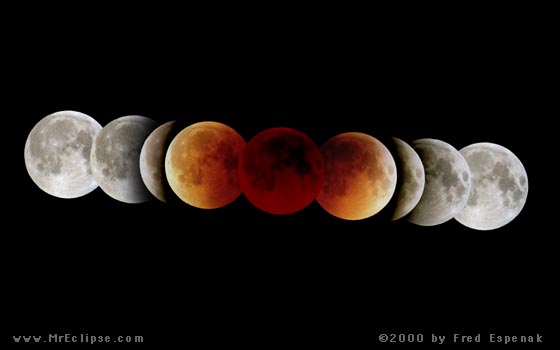 Be careful. Watch the times. Note that the times are often given in what is called Universal Time, or UTC. Here’s how to translate Universal Time to your local time zone.

2. Select a good place to watch. Yes, you can see it from cities or suburbs, but rural locations add clarity to the night sky, plus the sights and sounds and smells that can make an eclipse experience truly memorable. There’s a special beauty to watching in a country location, where thousands of stars pop into view and where the landscape around you will darken as the eclipse progresses.

If possible, the ideal location would have a wide open view of the sky, unobscured by trees or tall buildings. City parks or state parks are often good places to watch the skies. Check the closing times! Or plan to camp out overnight.

When the eclipse begins, just recline comfortably (lawn chairs are great!) and observe the eclipse. 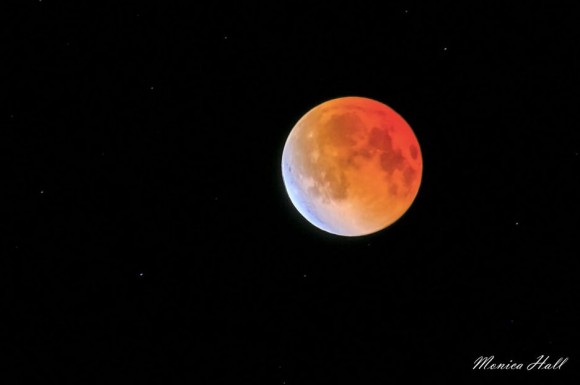 View larger. | Monica Hall captured this beautiful shot of the Japanese Lantern Effect – whereby the moon display swaths of various colors – during the April 2014 eclipse. Read more about this photo.

3. Know the stages of a total lunar eclipse. Eclipses last several hours and have several parts.

Penumbral eclipse begins. The outer, light penumbral shadow begins to cover the moon. It looks like a dusky shading moving across the moon’s face. This phase of the eclipse is subtle. Some people say they can’t tell it’s happening, even while looking right at it. We’ve heard it said you can’t discern the shadow until it reaches across roughly 70 percent across the moon’s face, but, in actuality, discernment is an individual skill. You might or might not see it before then. You might not detect anything until the partial eclipse begins.

Partial eclipse begins. The inner, dark umbral shadow begins to cover the moon. Like the penumbral shadow, it starts on one side and slowly creeps across the moon’s face. It looks like a dark bite taken out of the moon. Earth’s shadow looks completely dark at first. As the eclipse progresses, it’ll begin to take on a reddish-brown color that you can capture in time-exposure photos. Notice that the shadow on the moon’s face is curved. This fact enabled Aristotle to deduce Earth is a sphere, in the 4th century BC. When about three-fourths of moon is covered, the part in shadow should begin to glow dimly, like a burner on an electric stove. Also notice the light surrounding you on Earth. It was a bright moonlit landscape, and the ground may have been cast with dark moon shadows. Now the brightness gradually dims, and the world around you becomes dark, as on a moonless night.

Total eclipse begins. The dark shadow completely covers the moon. This is the total phase of the eclipse, called the totality. It generally lasts for about an hour. During the totality, the shadow on the moon often appears red. It is very beautiful, and the subtle colors change and shift through totality! Plus, red isn’t the only color you’ll see during totality. There are grays and browns, too. Some people say they see a rim of the color turquoise on the moon, in the minutes around the start and end of totality. This turquoise color is the result of absorption by Earth’s ozone layer. The various swaths of color across the moon’s face – especially toward the beginning and ending of totality – create an effect known as the Japanese lantern effect. You can capture it in photos, like the photo above by Monica Hall.

Greatest eclipse. The middle of the eclipse. The totality is at its mid-point. The shadow on the moon might now look reddish, or very dark, depending on whether a major volcanic eruption has recently taken place back on Earth. Volcanic eruptions may add aerosols to Earth’s stratosphere, which can darken an eclipse. Notice that the eclipsed moon looks more three-dimensional than an ordinary full moon. Look deeply within the shadow on the moon’s face. Can you recognize the familiar face of the man in the moon? Sometimes Earth’s shadow hides or obscures the moon’s surface features. Think about what it would be like to be on the moon during the total eclipse. During the totality, an astronaut on the moon would see the sun eclipsed by the Earth. There’d be a sunlit ring around Earth, really the light of all the world’s ongoing sunrises and sunsets. Be aware that, if you were on the moon, you’d experience a sudden and dramatic temperature drop! The moon doesn’t have an atmosphere to retain heat. Before the eclipse, the sunlit side of moon started out about 266 degrees Fahrenheit. Hidden in Earth’s shadow, temperatures on this same part of the moon plunge to about minus 146 degrees Fahrenheit — a drop of over 400 degrees!

Penumbral eclipse ends. The light, outer penumbral shadow leaves the moon. The eclipse is over. 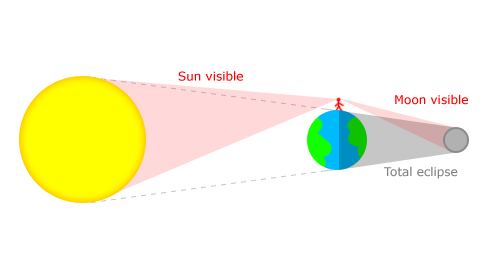 Illustration of a “selenelion,” an effect by which atmospheric refraction may lift the sun and an eclipsed moon above your horizon simultaneously.

4. Can you see a selenelion? Here’s one more thing you might want to watch for. It’s rare to get to see it from any one location on the globe, but very cool if you’re in the right spot to catch it. If you’re in just the right spot on Earth, you might observe the eclipsed moon setting while the sun rises – or the eclipsed moon rising while the sun sets. This is called a selenelion. Celestial geometry says this should not happen. After all, in order for an eclipse to take place, the sun and moon must be exactly 180 degrees apart in the sky, in a perfect alignment known as a syzygy. Such perfection – needed for an eclipse to take place – would seem to make it impossible to view the sun and eclipsed moon above your horizon simultaneously.

But – thanks to atmospheric refraction, the same effect that causes a spoon in a glass of water to appear broken in two – you might actually see images of the sun and totally eclipsed moon, both above your horizon at once, lifted up by the effect of refraction.

You need to be positioned in just the right spot on Earth’s surface to see a selenelion. The chart below shows you who has a shot at it for the January 20-21, 2019, total lunar eclipse:

The eclipse map above is courtesy of the NASA eclipse site. It shows your best chance of witnessing selenelion – a totally eclipsed moon and sun both above the horizon simultaneously – at or near the very narrow band labeled U2-U3 on the worldwide map above.

It’s along the narrow U2-U3 path (crossing Africa and the Middle East) where the totally eclipsed moon is about to set in the west as the sun sits low in the east at sunrise January 21. Or, if you’re in far northeastern Asia (Siberia), you might catch a selenelion with the totally eclipsed moon in the east as the sun sits low in the west at sunset January 21. Of course, you’ll need an absolutely level horizon to see a selenelion.

You still might be able to see a selenelion of a partially eclipsed moon and the sun both above the horizon from a wider swath of the world. Given clear skies and an unobstructed horizon, the section on the worldwide map between U1 (beginning of partial umbral eclipse, before totality) and U2 (beginning of total lunar eclipse) might be in a position to witness a selenelion of a partial eclipse. Eastern Africa and the Middle East might see a partial eclipse selenelion at sunrise January 21.

Those residing in between U3 (end of total lunar eclipse) and U4 (end of partial umbral eclipse, after totality) might have some chance of seeing a partially eclipsed moon and the sun in the same sky, too. Northwest Africa and Eastern Europe might see a partial eclipse selenelion at sunrise January 21.

Meanwhile, folks living in the Hawaiian Islands might see a partial eclipse selenelion at sunset January 20.

Click here for a larger view of the worldwide map.

Even if you’re along this U2-U3 path, or near it, you’ll want to have your binoculars handy because the totally eclipsed moon will be contending with the light of day.

Bottom line: You have to be in the right place on Earth’s globe to see a total eclipse of the moon. But there’s a good chance you will be, since half the world can see a lunar eclipse. You will enjoy a lunar eclipse more under a dark sky. Plan to watch for several hours. Watch the various parts of the eclipse. Optical aid, such as binoculars, will enhance the view. Have fun!