If you’re looking for Venus now – the brightest planet – you won’t find it with the eye alone. But it’s possible to catch the planet in September 2019, near the sunset, with a telescope. 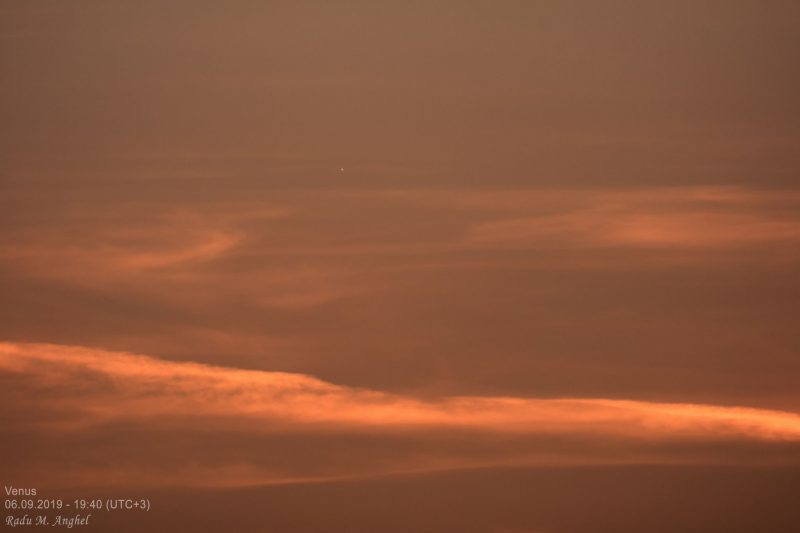 View at EarthSky Community Photos. | Radu Anghel in Romania caught Venus with a 4-inch refracting telescope and a Canon 750D on September 6, 2019. As another indication of how tough it is to catch Venus now, Radu said this was a crop of a larger image. Thanks, Radu!

Planet guides (like ours) will tell you that the brightest planet Venus is not visible in September 2019. That’s because Venus reached superior conjunction on August 14. At that time, Venus was behind the sun as viewed from Earth. Now Venus is still mostly lost in the sun’s glare, but it has officially transitioned from our morning sky, where it lingered for most of 2019, to our evening sky. And behold! An EarthSky community member has glimpsed Venus already through a telescope. Radu Anghel of Bacau, Romania, wrote on September 6, 2019:

Venus, the Evening Star, at 5 degrees away from the sun. Visible only with the telescope for now, but will get farther from the sun and shine in the next weeks, in the west after sunset. One shot, ISO 100, 1/200s.

By the way, Venus comes to superior conjunction every 584 days. Southern Hemisphere observers might catch Venus with the eye alone by the end of September. Here in the Northern Hemisphere, the autumn angle of the ecliptic to the western horizon in the evening will place Venus lower in the sky, closer to the sunset horizon. We in the north might have to wait until October to see Venus with the eye alone. 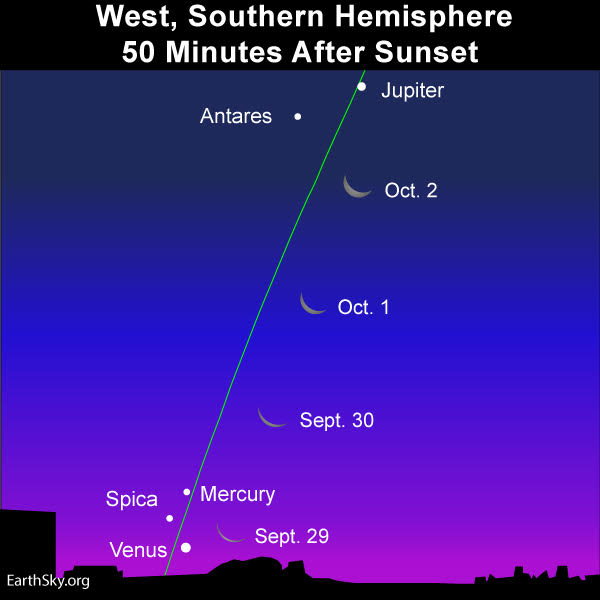 At the end of September 2019, it’ll be easier to view the planets Mercury and Venus than it was when this month began. The star Spica – brightest light in the constellation Virgo the Maiden – will be nearby. All of these objects will be easier to see from Earth’s Southern Hemisphere, because the ecliptic – or path of the sun, moon and planets – tilts steeply with respect to the sunset horizon in late winter/early spring, and spring begins in the Southern Hemisphere on the September equinox. Read more.

Bottom line: Photo from an EarthSky community member of Venus in the evening sky, just 5 degrees from the sun.