These 2 sky phenomena – anticrepuscular rays and rainbows – can appear separately. In this case, they appear together, both originating from the same source, the sun, on the opposite side of the sky. 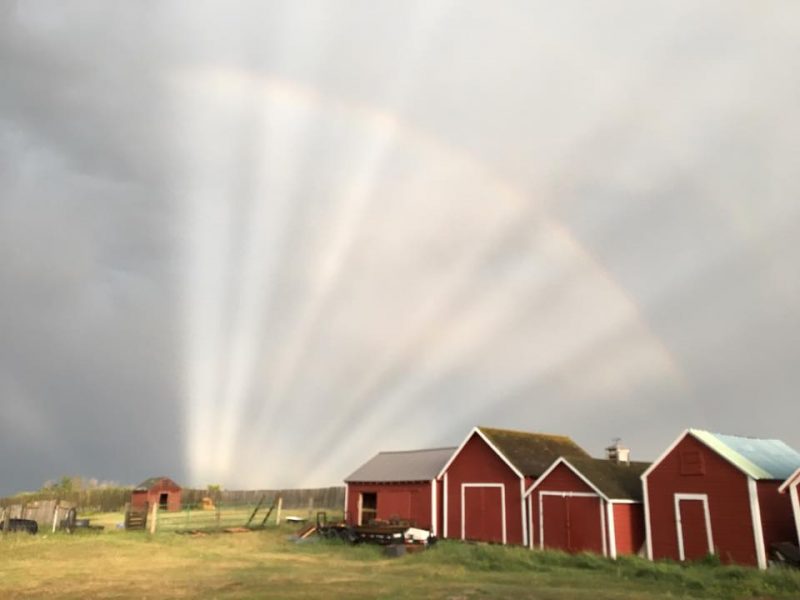 There are actually 2 rainbows here. See the faint one above the primary bow? Photo by Janice Reynolds

Janice Reynolds in Nokomis, Saskatchewan, Canada caught two different sky phenomena in this photo from July 30, 2017. Her photo is looking east in late day, when the sun is setting – or soon to set – the west. The photo shows both a double rainbow and anticrepuscular rays, both always seen in a direction opposite the sun. Janice wrote:

I saw this looking to the east. We had just had a very bad storm with very high sudden winds, thunder, lightening and some rain. I had rushed to the barnyard to lock up my animals and got stuck in it and took shelter in the barn with the animals. After the storm cleared, I fed and locked them up and the sky was clearing as quickly as it had blown in. The sun was starting to poke through the clouds. As I was heading back to the house, I saw this image and took the photo. So strange.

Read more about how rainbows form.