Why rainbows are curved

A rainbow isn’t a flat 2-dimensional image on the dome of sky. It’s more like a mosaic, composed of many separate bits … in 3 dimensions. 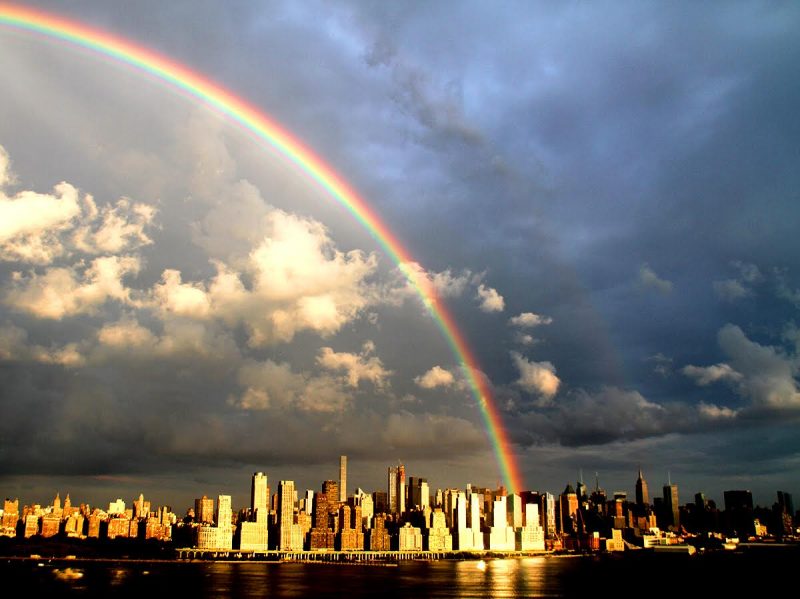 Light and raindrops work together to create a rainbow, but why is it curved? Here are some things to remember before you start, or just skip down to some rainbow physics, or skip to the explanation as to why rainbows are curved, below.

First, look for a rainbow when the sun is behind you, and there are raindrops falling in front of you.

Second, know that – when making the rainbow – sunlight is emerging from many raindrops at once. A rainbow isn’t a flat two-dimensional image on the dome of sky. It’s more like a mosaic, composed of many separate bits … in three dimensions. More about the three-dimensional quality of rainbows below. Just know that your eye sees rainbows as flat for the same reason we see the sun and moon as flat disks, because, when we look in the sky, there are no visual cues to tell us otherwise.

Third, rainbows are more than half circles. They’re really whole circles. You’ll never see a circle rainbow from Earth’s surface because your horizon gets in the way. But, up high, people in airplanes sometimes do see them. Check out the photo below.

View larger. | Full circle rainbow was captured over Cottesloe Beach near Perth, Australia, in 2013 by Colin Leonhardt of Birdseye View Photography. He was in a helicopter flying between a setting sun and a downpour. Used with permission.

Ready for some rainbow physics? When making a rainbow, sunlight shining into each individual raindrop is refracted, or split into its component colors. And the light is also reflected, so that those various colors come bouncing back.

One key to rainbows is that the light leaves the collection of raindrops in front of you at an angle. In making a rainbow, the angle is between 40 and 42 degrees, depending on the color (wavelength) of the light. Physicsclassroom.com explained it this way:

The circle (or half-circle) results because there are a collection of suspended droplets in the atmosphere that are capable of concentrating the dispersed light at angles of deviation of 40-42 degrees relative to the original path of light from the sun.

These droplets actually form a circular arc, with each droplet within the arc dispersing light and reflecting it back towards the observer.

So why are rainbows curved? To understand the curvature of rainbows, you’ll need to switch your mind to its three-dimensional-thinking mode. Cecil Adams of the newspaper column The Straight Dope explained it this way:

We’re used to thinking of rainbows as basically two-dimensional, but that’s an illusion caused by a lack of distance cues. The cloud of water droplets that produces the rainbow is obviously spread out in three dimensions.

The geometry of reflection, however, is such that all the droplets that reflect the rainbow’s light toward you lie in a cone with your eyes at the tip.

It takes an intuitive leap to see why this should be so, but let’s give it a crack. Water droplets reflect sunlight (or any light) at an angle of between 40 and 42 degrees, depending on the wavelength …

The sun is low and behind you. All the sunbeams head in, strike the cloud of water droplets ahead of you and bounce back at an angle of [approximately] 40 degrees.

Naturally the beams can bounce 40 degrees any which way — up, down, and sideways.

But the only ones you see are the ones that lie on a cone with a side-to-axis angle of 40 degrees and your eyes at the tip.

I also asked Les Cowley of the great website Atmospheric Optics. He’s a world-class expert in sky optics and EarthSky’s go-to guy for all daytime sky phenomena. Les told me:

The cone explanation is sound and also my preferred one at Atmospheric Optics.

Rainbows don’t exist! They are nowhere in space. You cannot touch them or drive around them. They are a collection of rays from glinting raindrops that happen to reach our eyes. Raindrops glint rainbow rays at an angle of 42 degrees from the point directly opposite the sun. All the drops glinting the rainbow are on the surface of a cone with its point at your eye. They can be near and far. Other drops not on the cone also glint sunlight into rainbow colours but their rays do not reach our eyes. We only see those on the cone. When you look down the cone you see a circle. So rainbows are circles!

To get technical, here is how rainbow rays form.

And this one (it took pain to write it) explains why we see rainbows and halos.

Phew! Thanks from EarthSky to all the smart and knowledgable people who contributed to this explanation! 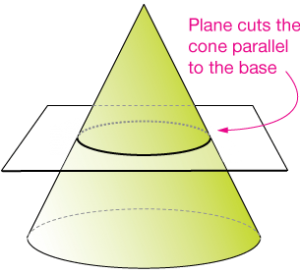 A circle as a section of a cone, via xactly.com.

And now for some great pics!

Mohamed Laaifat Photographies in Normandy, France caught the waxing gibbous moon below a rainbow on March 28, 2018.

Rainbow reflected at sunset, via Fotograf Göran Strand. He captured this image in Vansbro, Sweden, over a river known as the Västerdalälven. More about this image here. 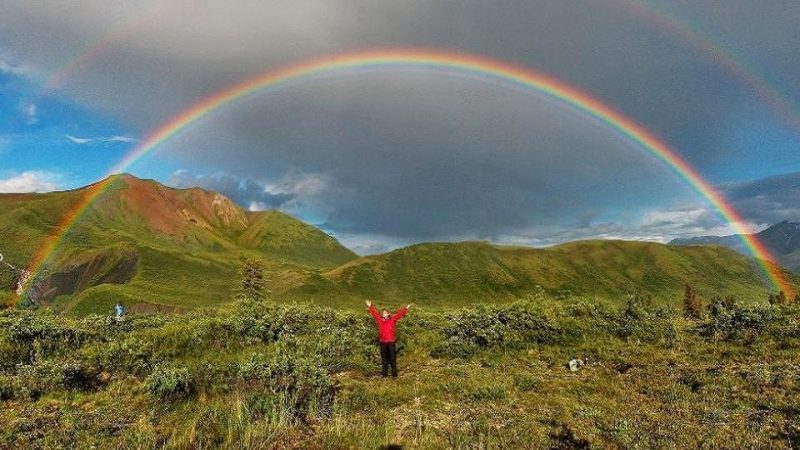 Rainbow over the Brooklyn Bridge. Photo via Jennifer Khordi. 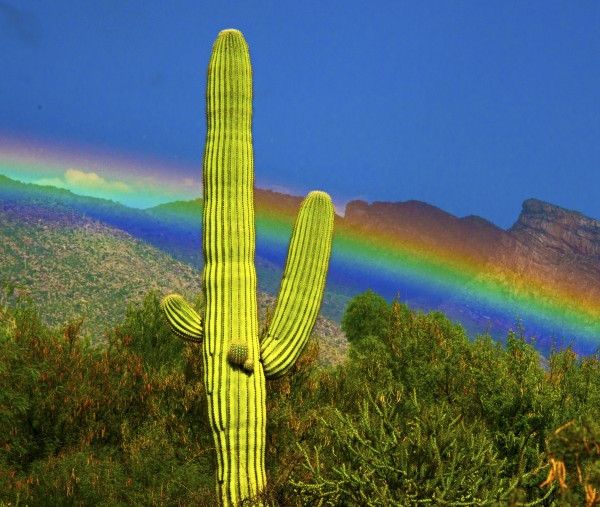 Eliot Herman wrote to EarthSky: “This one is my fav ground-hugging rainbow, right out my front door … A final last thunder storm and as the day was ending it cleared and the low angle sun lit up this ground hugging rainbow on the adjacent hillside.”

Bottom line: Why rainbows have a curved shape.