We still haven’t heard from the Opportunity rover on Mars, which went silent in June when a dust storm engulfed it. Now, at least, the dust has cleared, and we can see the rover! 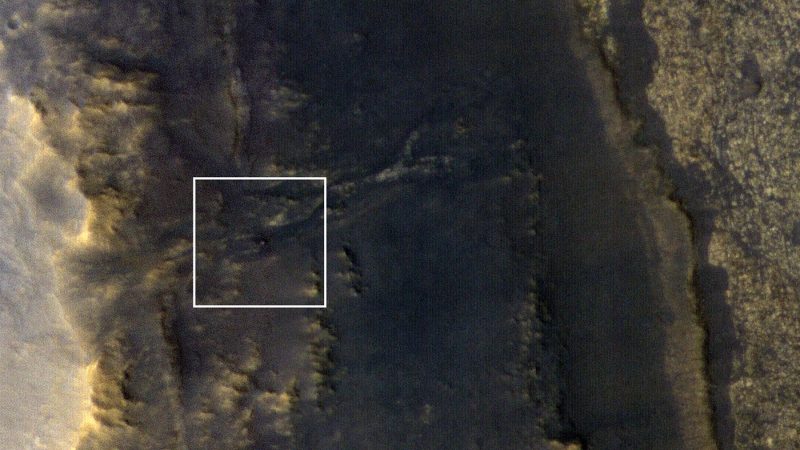 View larger. | The HiRISE camera aboard NASA’s Mars Reconnaissance Orbiter (MRO) captured this image on September 20, 2018. The object centered in the square is the Opportunity rover, now visible again for the 1st time since a dust storm swept over it a little more than 100 days ago. Image via NASA/JPL-Caltech/Univ. of Arizona.

NASA said on September 25, 2018, that it still hasn’t heard from its Opportunity rover on Mars, which had been going strong on the red planet since landing there in early 2004. But, NASA announced:

… at least we can see it again.

A high-resolution camera (HiRISE) aboard NASA’s Mars Reconnaissance Orbiter captured a small object on the slopes of Mars’ Perseverance Valley. That object is Opportunity, which was descending into this valley on Mars when a dust storm swept over the region a little more than 100 days ago. NASA said:

The storm was one of several that stirred up enough dust to enshroud most of the red planet and block sunlight from reaching the surface. The lack of sunlight caused the solar-powered Opportunity to go into hibernation.

The rover’s team at NASA’s Jet Propulsion Laboratory in Pasadena, California, hasn’t heard from it since. On September 11, JPL began increasing the frequency of commands it beams to the 14-year-old rover.

The tau — a measurement of how much sunlight reaches the surface — over Opportunity was estimated to be a little higher than 10 during some points during the dust storm. The tau has steadily fallen in the last several months. On Thursday, September 20, when this image was taken, tau was estimated to be about 1.3 by MRO’s Mars Color Imager camera.

This image was produced from about 166 miles (267 km) above the Martian surface. The white box marks a 154-foot-wide (47-meter-wide) area centered on the rover. 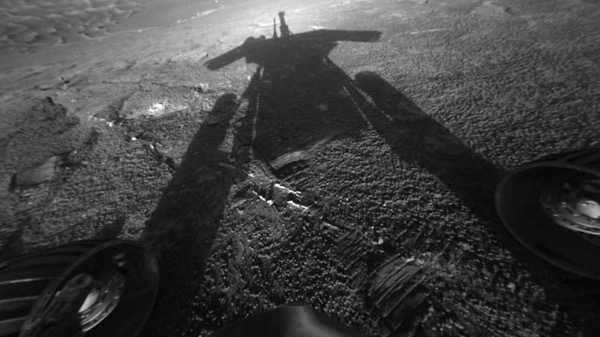 Opportunity caught its own shadow on Mars on July 26, 2008. Read more about this image.

Bottom line: An image of the Opportunity rover on Mars, which has not been heard from since dust engulfed it in June, 2018. Updates on Opportunity can be found here.