Opportunity has been exploring Mars for 14 years. It and its solar panels recently survived the winter darkness in its location and are now facing a possible planet-wide dust storm in 2018.

As incredible as it is to believe, NASA’s Opportunity rover is still going strong on Mars, nearly 14 years after landing in January 2004. And now once again, it has recently passed the shortest daylight time of the Martian year, the worst part of the Martian winter, with pretty clean solar panels to boot. Unlike the newer Curiosity rover which uses nuclear power, Opportunity, and its now-dead twin Spirit, uses solar panels for energy. At the same time, the rover continues to study an ancient gully thought to have been carved by water in the distant past.

Just like Earth, Mars has a tilted axis and seasons, although the Martian year is about twice as long. The period of shortest daylight this year was in October and November, Earth-time. 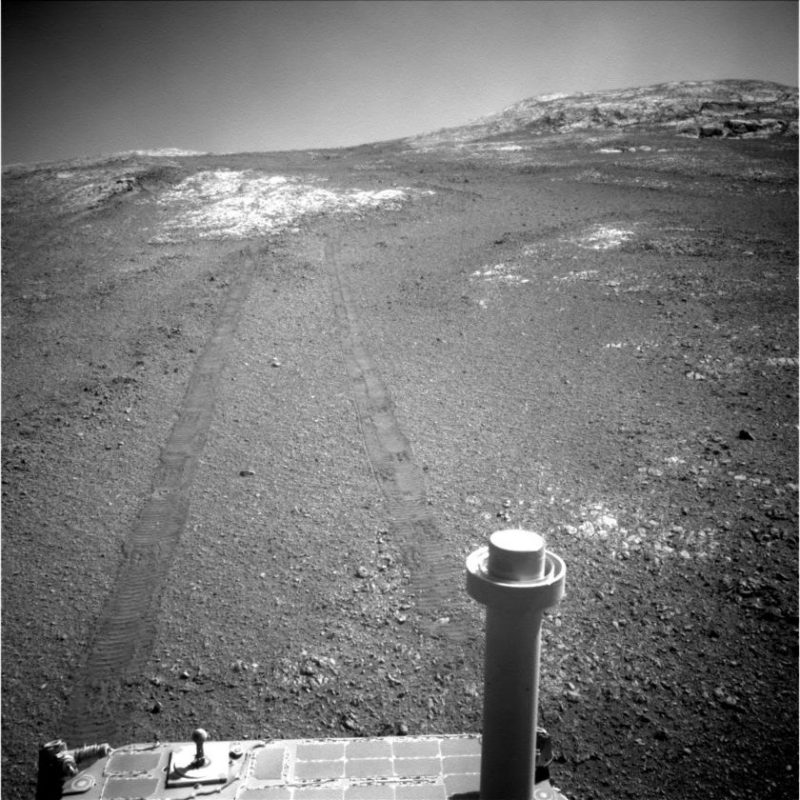 Another recent view of Opportunity looking back at its tracks as it continues to move down the slope in Perseverance Valley. Photo Credit: NASA/JPL-Caltech 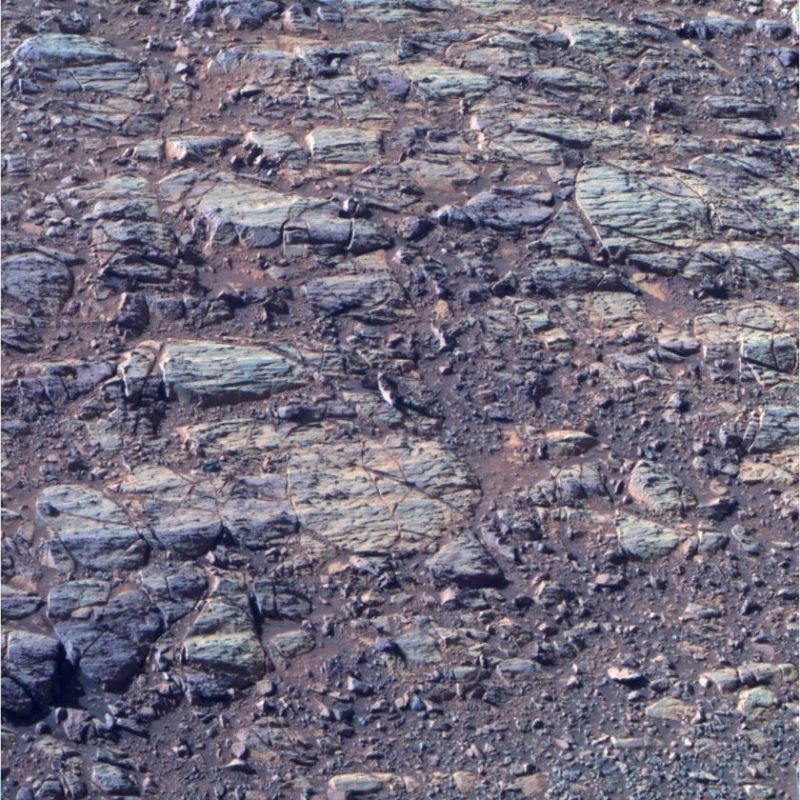 A light-toned rock outcrop in the valley called La Bajada, which contains little “nobs” on the rocks, with “tails” of material behind them. Photo Credit: NASA/JPL-Caltech 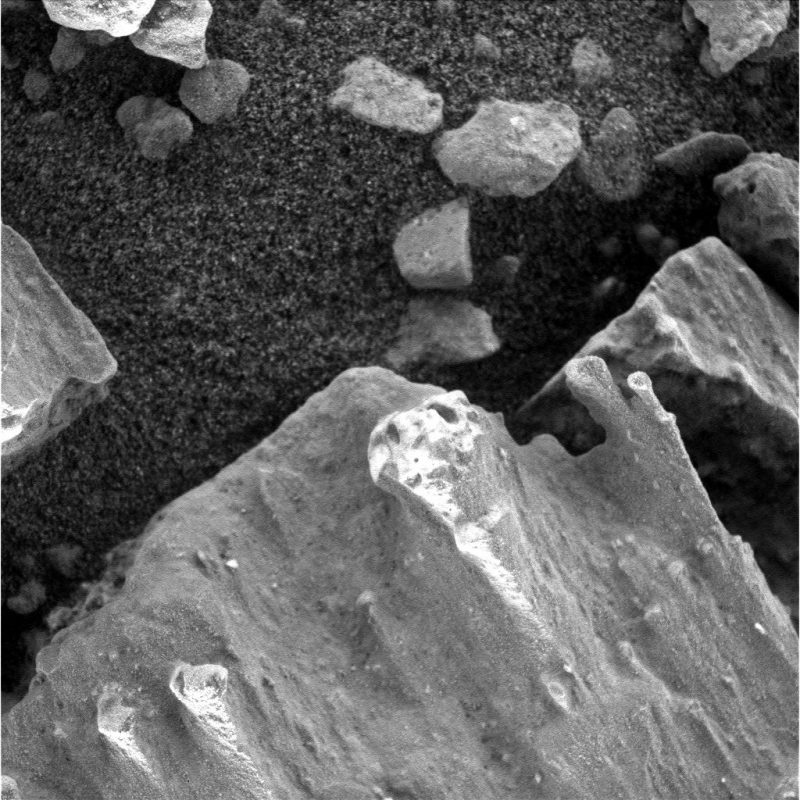 A closer look at some of the “nobs” on the rocks, thought to be evidence of more recent wind erosion. Photo Credit: NASA/JPL-Caltech

Having fairly clean solar panels is good, including because scientists are anticipating that there may be another planet-wide dust storm in 2018. The last such storm was in 2007. Herman said:

We were worried that the dust accumulation this winter would be similar to some of the worst winters we’ve had, and that we might come out of the winter with a very dusty array, but we’ve had some recent dust cleaning that was nice to see. Now I’m more optimistic. If Opportunity’s solar arrays keep getting cleaned as they have recently, she’ll be in a good position to survive a major dust storm. It’s been more than 10 Earth years since the last one and we need to be vigilant.

Relying on solar energy for Opportunity keeps us constantly aware of the season on Mars and the terrain that the rover is on, more than for Curiosity. 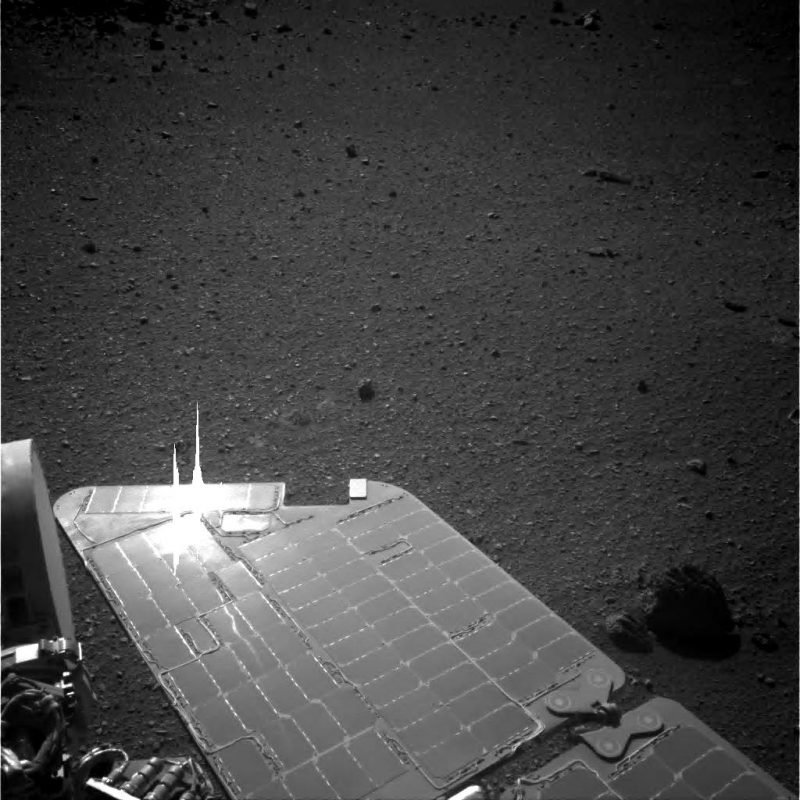 Recent image showing Opportunity’s solar panels to be relatively dust-free – good news for the rover as it prepares to enter 2018. Photo Credit: NASA/JPL-Caltech

In the meantime, Opportunity has been busy investigating Perseverance Valley, a gully in the rim of Endeavour crater that scientists think was carved by liquid water a few billion years ago. The rover has been going to different specific locations within the valley, referred to as lily pads, to examine the rocks and soil. Opportunity Project Scientist Matt Golombek, of JPL, said:

We have not been seeing anything screamingly diagnostic, in the valley itself, about how much water was involved in the flow. We may get good diagnostic clues from the deposits at the bottom of the valley, but we don’t want to be there yet, because that’s level ground with no more lily pads.

We are confident this is a fluid-carved gully, and that water was involved. Fluid-carved gullies on Mars have been seen from orbit since the 1970s, but none had been examined up close on the surface before. One of the three main objectives of our new mission extension is to investigate this gully. We hope to learn whether the fluid was a debris flow, with lots of rubble lubricated by water, or a flow with mostly water and less other material.

Bottom line: The Opportunity rover has been on Mars for 14 years. It and its solar panels survived the time of greatest darkness in its location and are now facing a possible planet-wide dust storm in 2018.

This article was originally published at AmericaSpace. Reprinted here with permission.