The Milky Way over the Ligurian Sea as seen from Sestri Levante in the Italian Riviera. 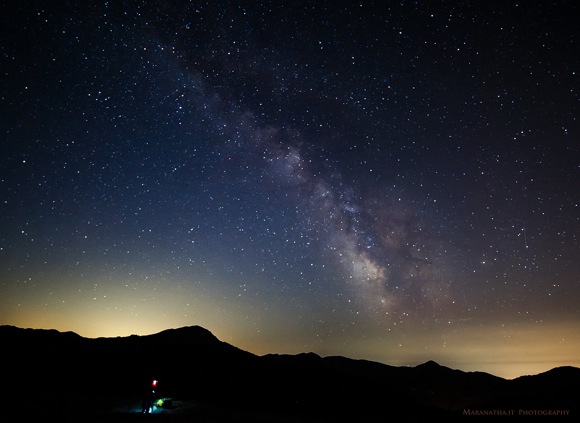 Milky Way over Ligurian Sea, as seen from Italy. Image via Maranatha_IT Photography

EarthSky Facebook friend Maranatha_IT Photography captured this beautiful image of what we in the Northern Hemisphere call the “summer” Milky Way. It’s the view toward the center of our own Milky Way galaxy. He caught this photo over the Ligurian Sea – an arm of the Mediterranean Sea, to the west of the top of the “boot” of Italy – in early August 2013.

Over the next week or so, the waxing crescent moon will set soon after sunset and be mostly absent from the evening sky. And a moonless sky means this is a good time to get out into the country for a look at the summer Milky Way: the edgewise view into our own galaxy.

It also means it’s a good time to watch meteors! We’re getting reports already of 5 to 10 Perseid meteors per hour, and the peak of the shower is still a week away. Read more about the 2013 Perseid shower here.

Check out more of Marnatha_IT Photography’s work on Facebook