Milky Way against a bright moon

Even in bright moonlight, astrophotographer Justin Ng captures amazing shots of the Milky Way. Here’s one from May 6, during the peak of a meteor shower. 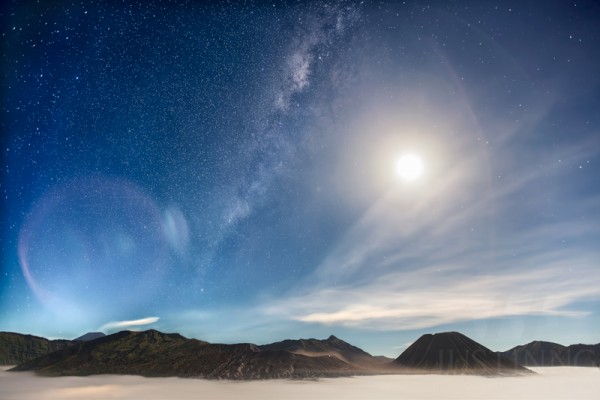 View larger. | Milky Way against a bright moon at Mount Bromo during the peak of Eta Aquarid meteor shower, by Justin Ng of Singapore.

Just led my first full moon astrophotography expedition to Mount Bromo, one of the active volcanoes in Indonesia. It would have been easier to unveil the Milky Way against the bright moon on our first night there, but the sky was cloudy and we could only do this on our last night, which was more challenging as the bright moon was located nearer to the Milky Way’s galactic center.

Nonetheless, using the method that I have shared in this tutorial, I managed to unveil the Milky Way that’s obscured by the moon.

So it’s still possible to unveil the Milky Way against a large and bright moon! Give it a try.

Justin pointed out that the circular feature in the photo – on the lower left side – was not a real object in the sky over Mount Bromo. It’s an internal reflection from his camera, known as a lens flare, often seen (although usually not so beautifully!) in photos of bright objects like the sun and moon.