The Perseids are declining now, but 2016 brought a great meteor shower for many around the globe. See photos and videos here. 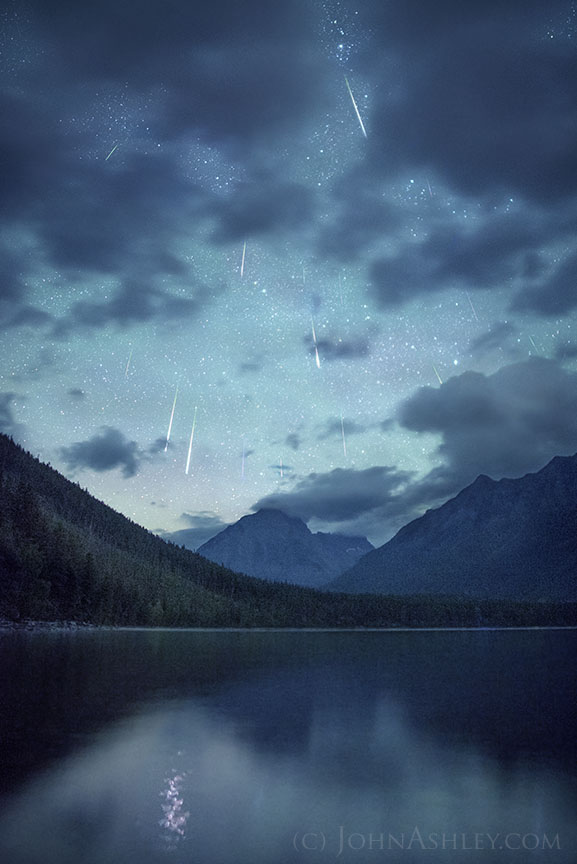 This image perfectly captures what you’d see after a night of meteor-watching, as dawn is approaching, when the Perseids’ radiant point is high in the sky and the meteors rain down from overhead. Composite image by John Ashley at Glacier National Park in Montana. 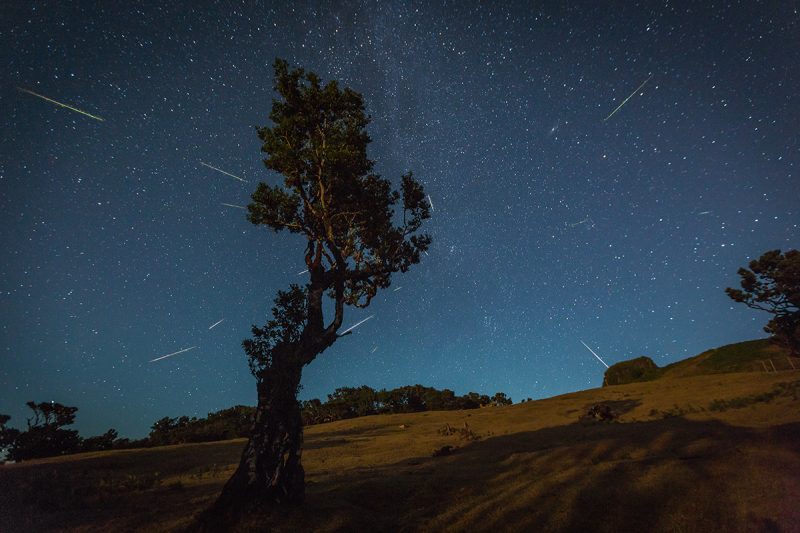 Nuno Serrão created this composite image from photos acquired on August 12. He said, “These photos are from Madeira Island – that recently made the news due to forest fires. Theres still green in the island! It was a glorious night, 180-200 per hour.” 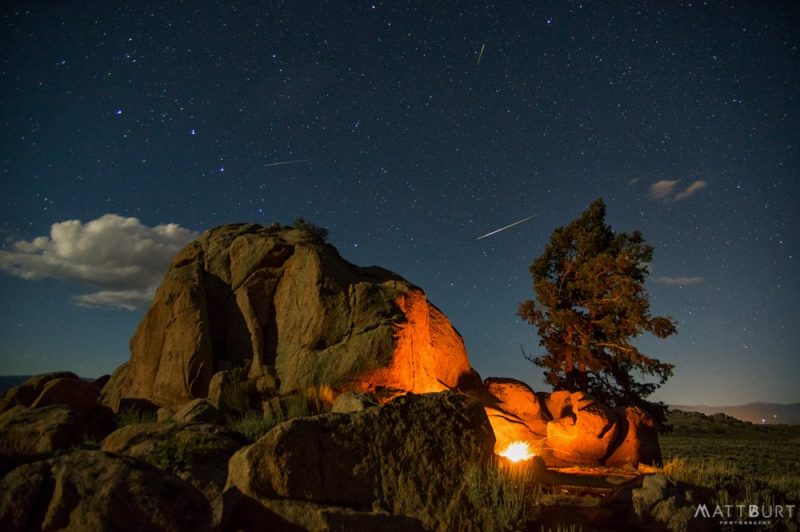 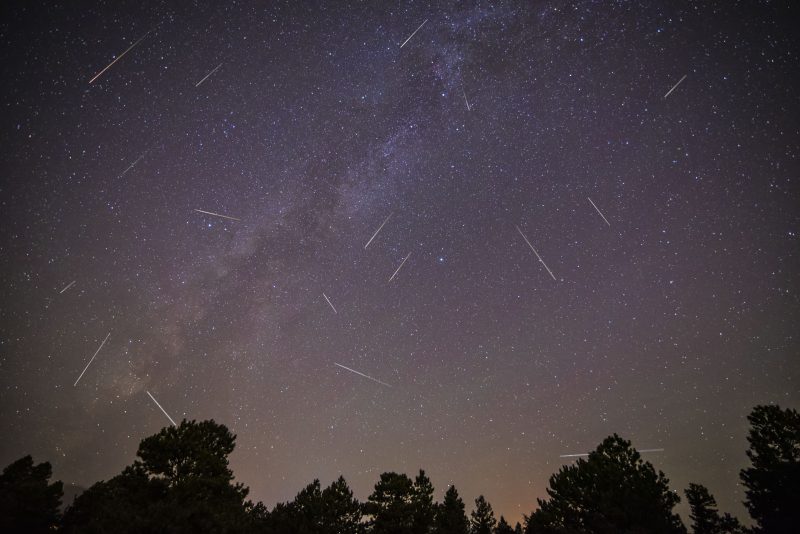 Composite image from Brian Brace in Colorado. He wrote: “Arrived at the Genesee Park around 11 p.m., and, as soon as I parked, the sky immediately lit up. Meteors didn’t slow down one bit in any direction. Around 2:30-3 a.m. is when it got really intense, was able to see 2-3 meteors go off at the same time on multiple occasions. Worth every second! Recommend getting out the next couple of nights.” 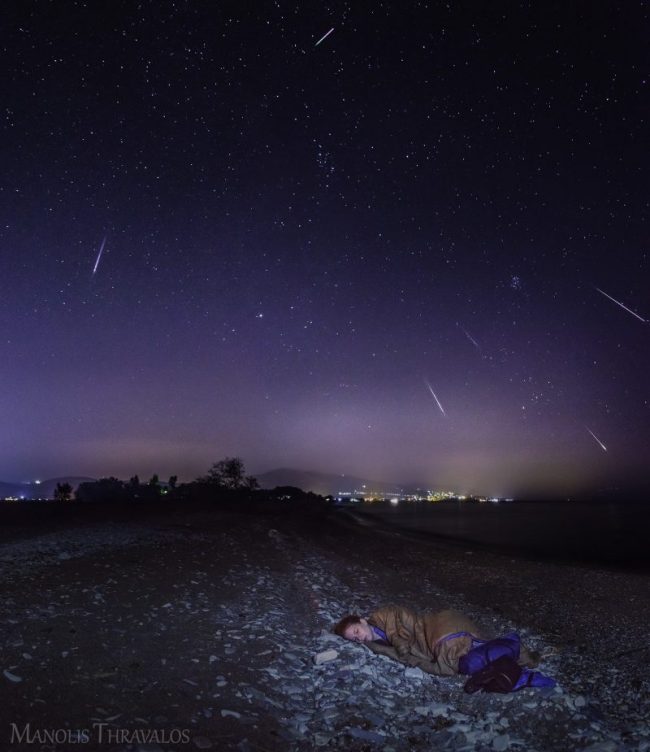 Some people slept through the meteor shower. Manolis Thravalos created this composite from images captured at Samos Island, Greece. He said he counted “hundreds of falling stars.” 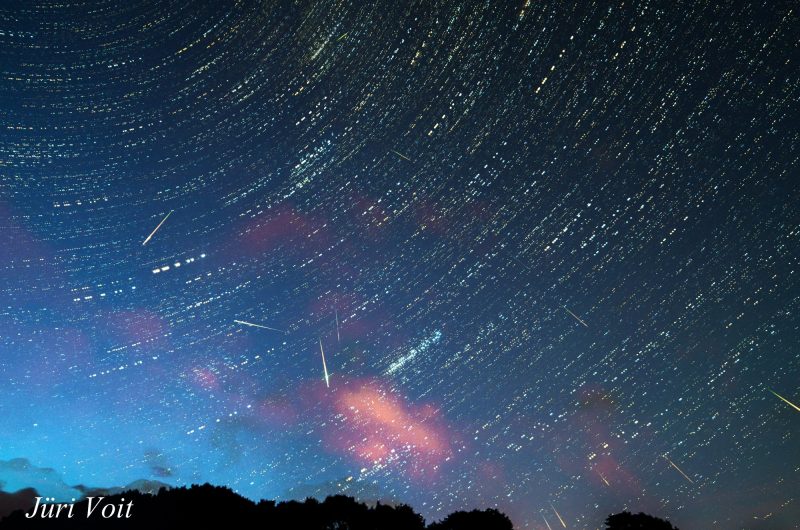 Jüri Voit Photography contributed this nice composite image of the Perseid shower. He didn’t say how long the exposure time was, but you can see – from the length of the star trails – that it was some hours. Thanks, Jüri!

The video above is from the Sociedad de Astronomía del Caribe (SAC).

Perseid meteor burn up over Greece (short timelapse) from Alexandros Maragos on Vimeo. 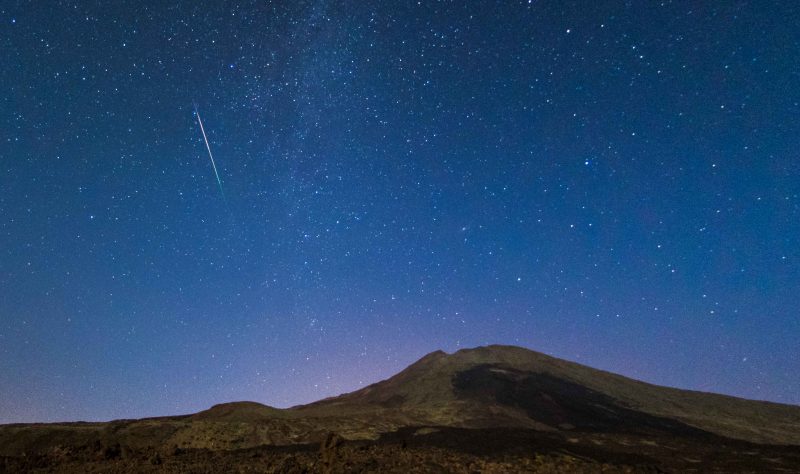 Perseid meteor over Pico Viejo volcano, on the island of Tenerife, Spain. Photo by Roberto Porto and Nahum Garcia. 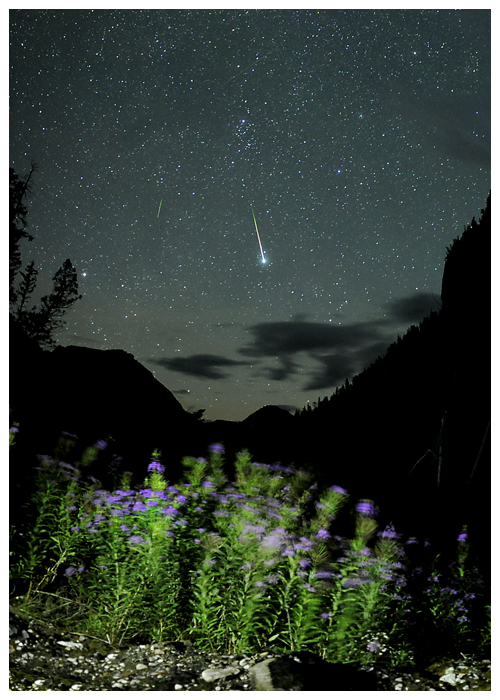 Robert Ede caught this Perseid on the night of August 12 from British Columbia, Canada. 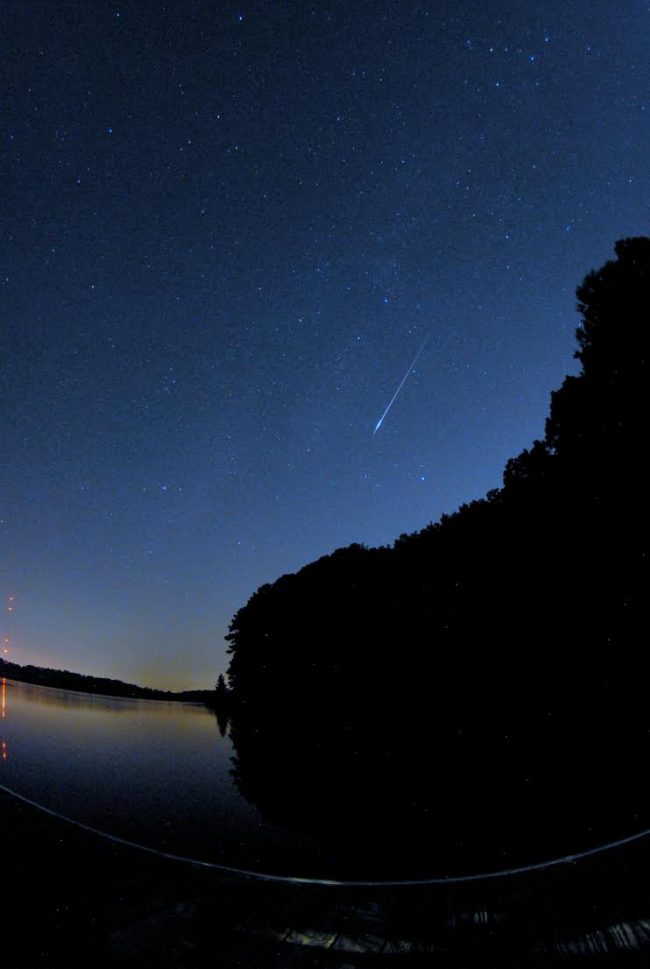 Michael Citrini near Raleigh, North Carolina caught this meteor on the morning of August 12. He wrote: “I enjoyed witnessing this meteor fly over Lake Wheeler a few hours ago. Amazing!”

Wendy Miller wrote on the morning of August 12: “An amazing Perseid meteor I got in Temecula, California. I have never seen one like this before!” 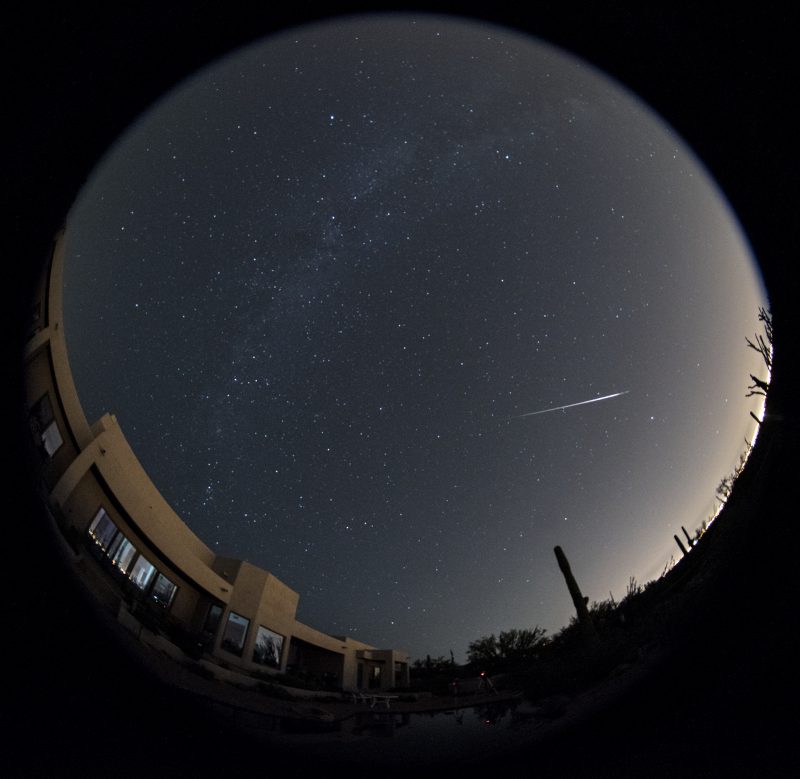 Eliot Herman in Tucson, Arizona wrote on August 12: “It has been cloudy and rainy for two weeks and thought I’d miss the Perseids, but it cleared off last night just in time. The numbers were good, I saw over 50, not watching all the time but most were small and quite a few a nice green. This is about the brightest of the night.” 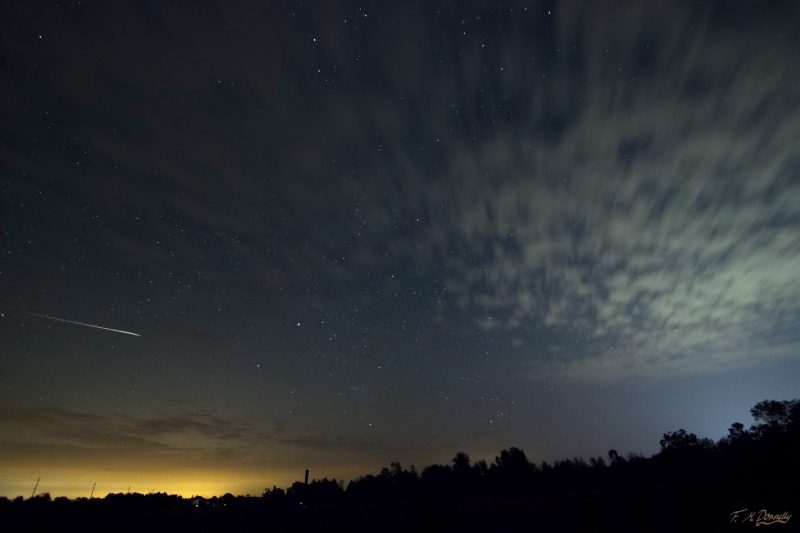 Fiona M. Donnelly caught this meteor on the morning of August 11 over Smith Falls, Ontario. 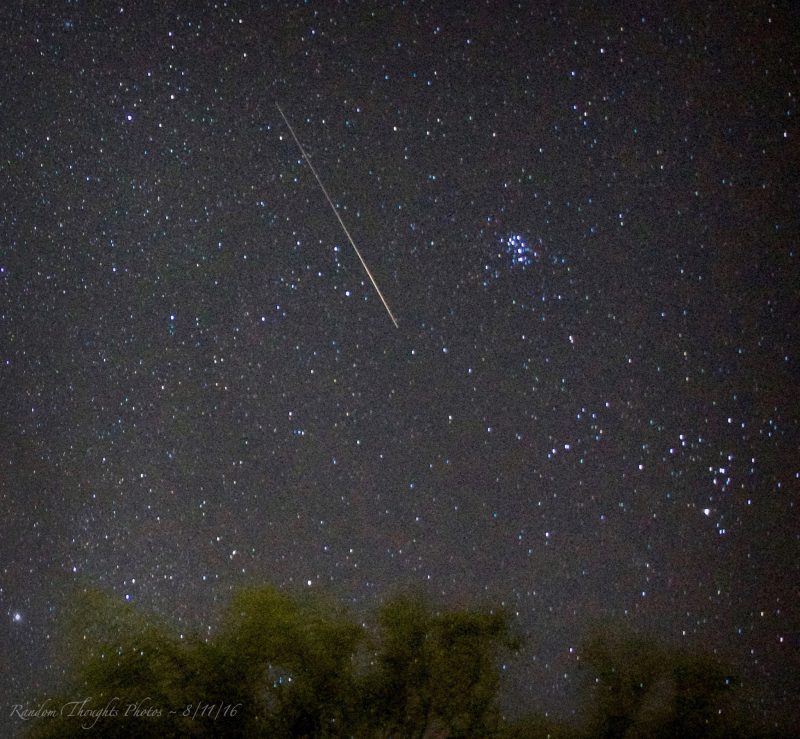 Kelly Dreller wrote: “A Perseid whizzing by the Pleiades and Taurus early this morning! I am loving the colors of these ‘shooting stars!’ They are spectacular! Lake Havasu City, Arizona.” Thanks, Kelly! 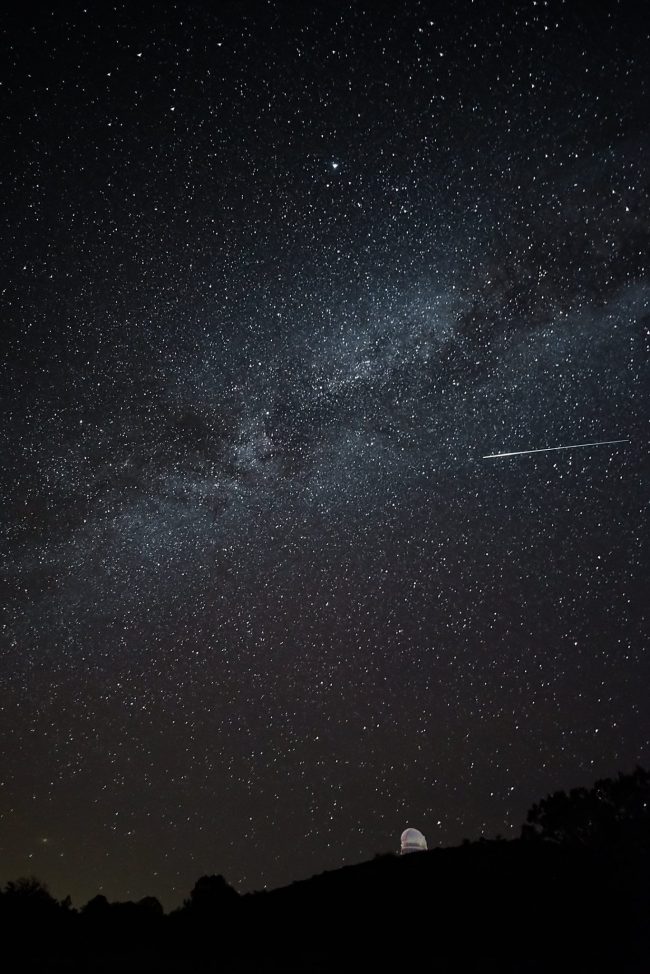 Wayne Wendel caught this meteor from McDonald Observatory in West Texas. Thanks, Wayne! 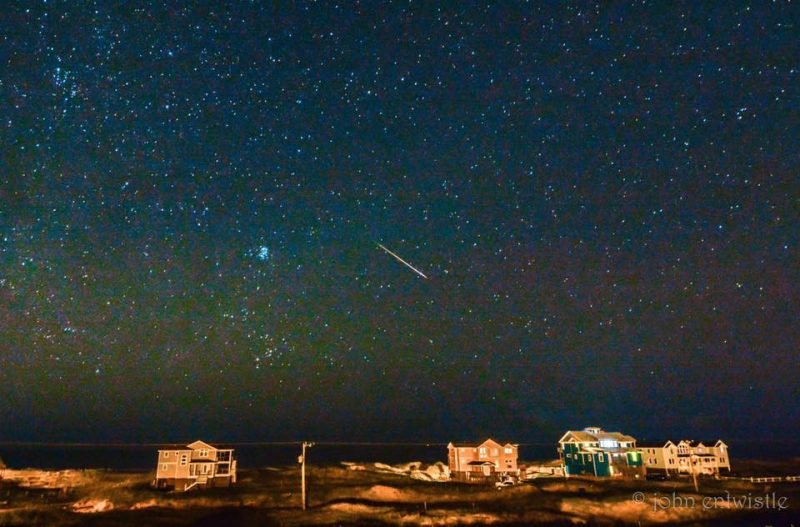 John Entwistle Photography wrote: “A Perseid meteor streaking across the sky over Corolla, Outer Banks, NC. The Perseid meteors showers happen every August and are supposed to peak tonight in the early morning hours. Hopefully the skies are clear, don’t miss it!” 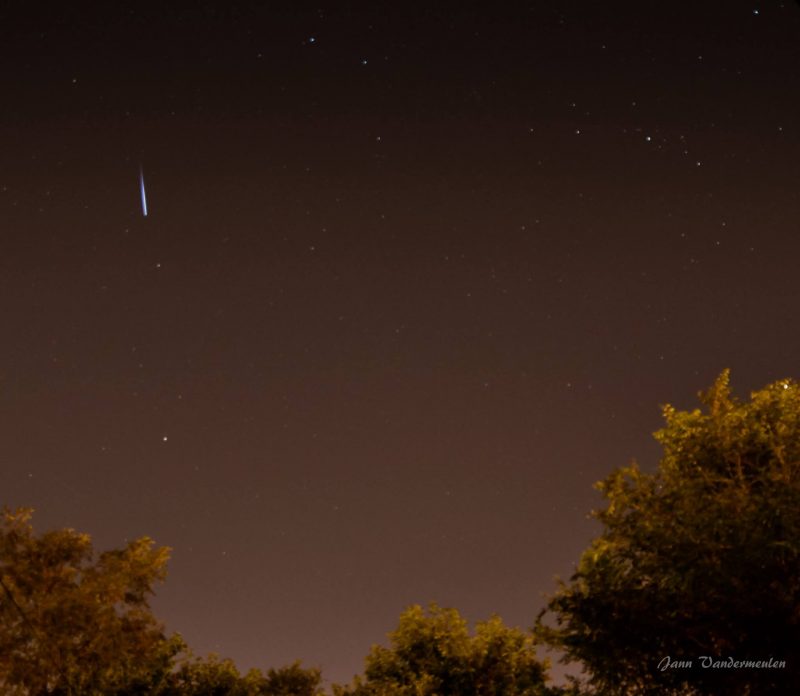 Jann Van wrote on August 10: “I caught one of the Perseid meteors last night from Toronto, Canada.” 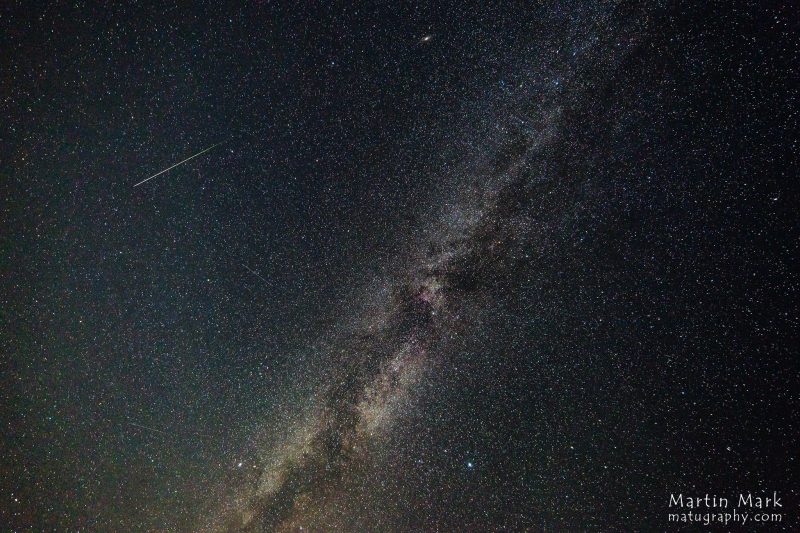 Martin Mark of Matugraphy in Estonia caught this meteor against the backdrop of the Milky Way on August 9, 2016. 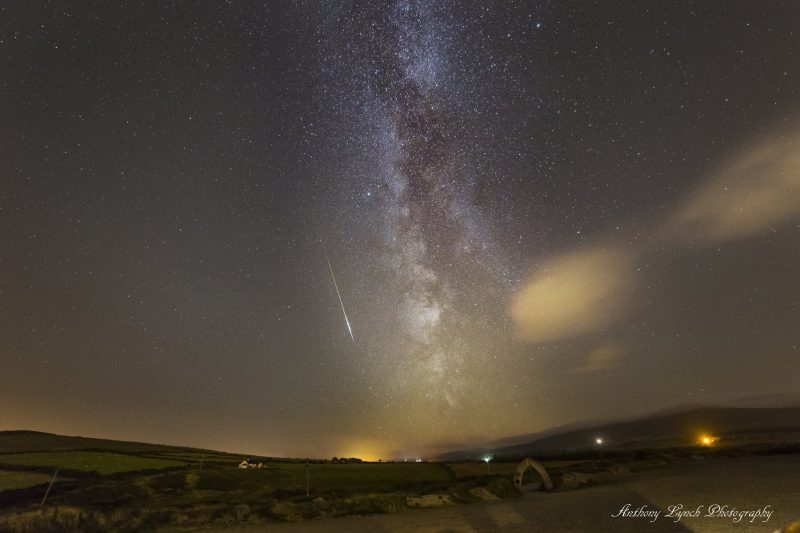 Our friend Anthony Lynch Photography caught this meteor on the morning of August 9 from Wicklow, Ireland. He wrote: “Lovely Perseid meteor next to the Milky Way … Vapor trail lasted a few seconds.” 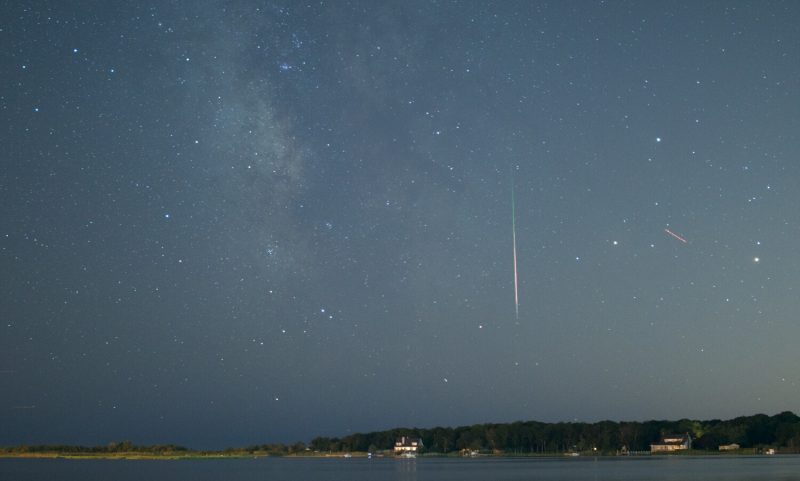 Bobby D’Esposito Jr. caught this colorful meteor over Long Island, New York on August 8, 2016. He wrote: “With meteors in mind, I set up at the south shore of East Moriches, Long Island. Test one, ISO too low. Test two, nailed it… It was actually that easy! Gotta love it. Thanks EarthSky, for running one of the coolest and most accurate/user friendly astronomy websites to date. Wishing everyone clear skies this Perseids!” 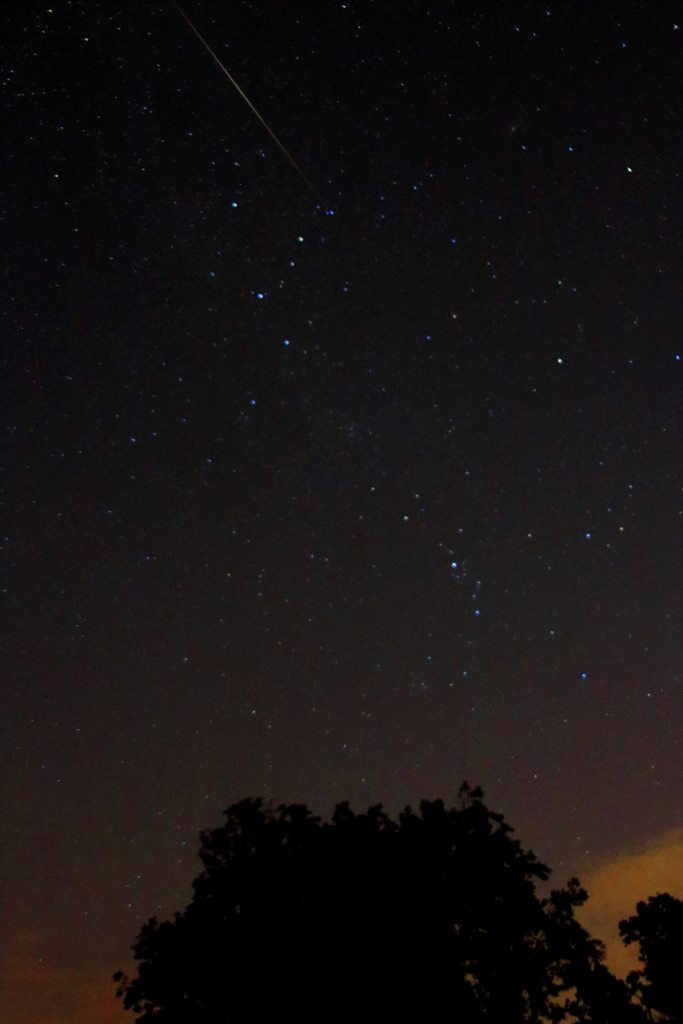 Mike O’Neal caught this meteor on August 8. He wrote: “Saw several goods ones and the predicted peak is still a few nights away. Wishing all good sky for viewing! One grazed Cassiopeia.” 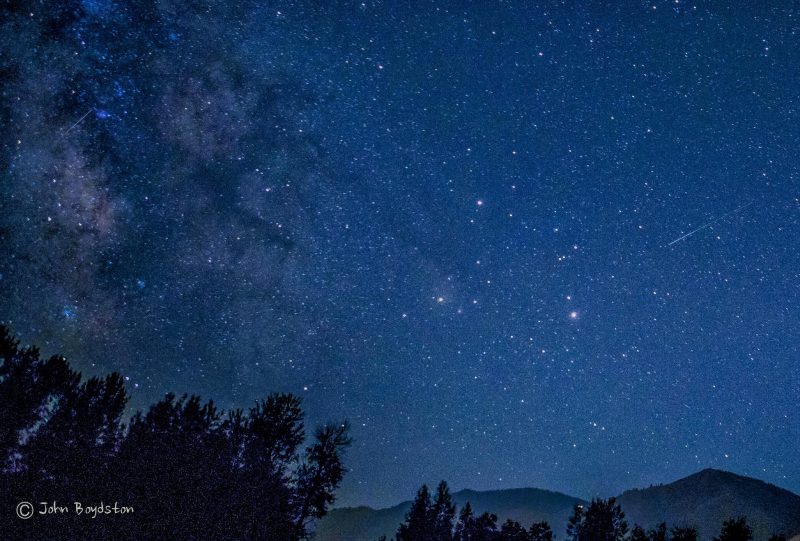 There are 2 meteors in this photo from from John Boydston in Sun Valley, Idaho. The bright triangle of objects is Mars (brightest), Saturn (above) and the star Antares. Thanks, John! 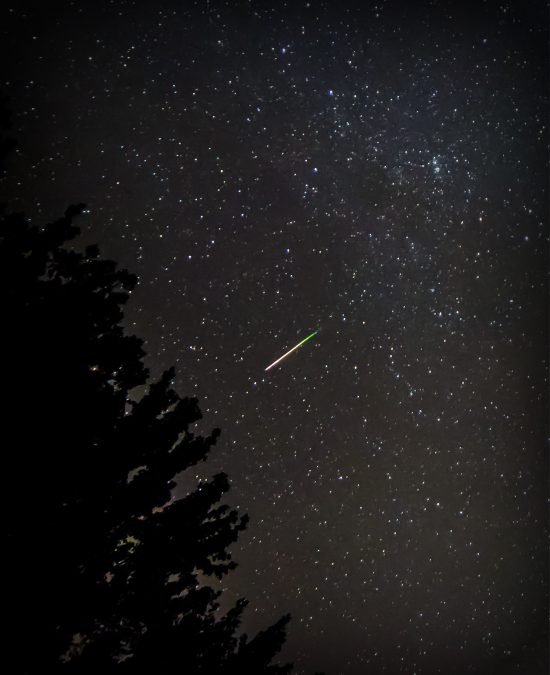 Charlie Winstead caught this meteor on August 8. He wrote: “Since rain and general overcast is forecast for the peak time of the Perseids shower, I thought I would start a few days earlier – while the sky was clear, I was lucky to catch this meteor.” 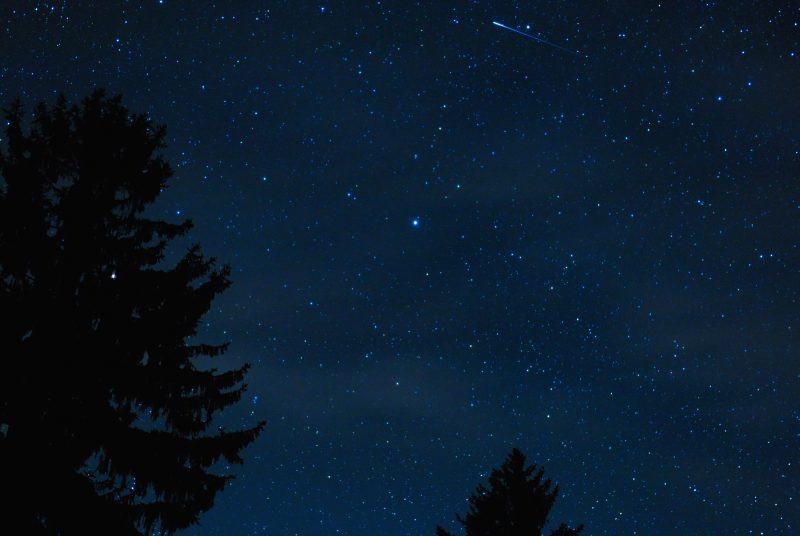 Photographer Dawn Reilly caught this meteor on the morning of August 7. She wrote: “Attempting to do a star trail at Cherry Springs State Park, watching meteors all over the place but never in the direction where my camera was pointed. So I thought!” 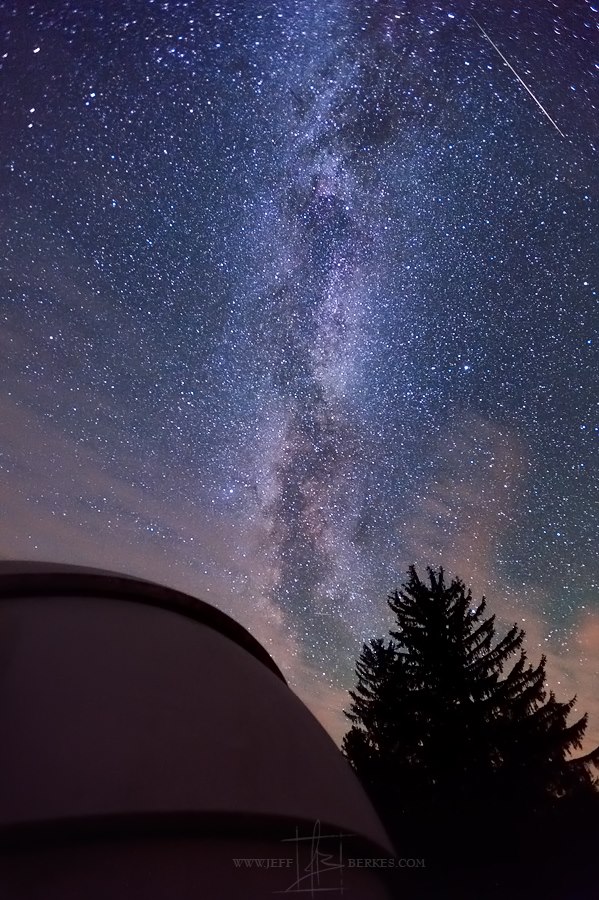 Our friend Jeff Berkes Photography caught this meteor on the night of August 6-7, 2016. He wrote: “A Perseid over Cherry Springs State Park in Pennsylvania this past weekend. The park has one of the darkest skies in the country and it a must-see for all night sky lovers.” 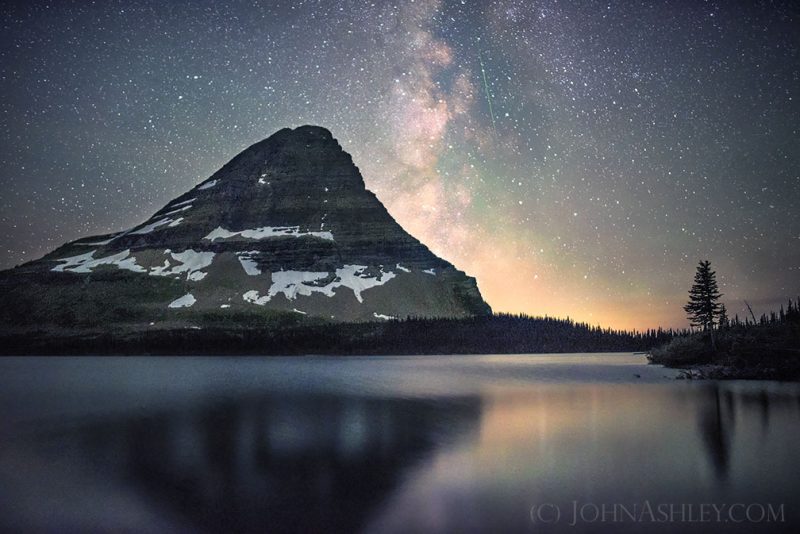 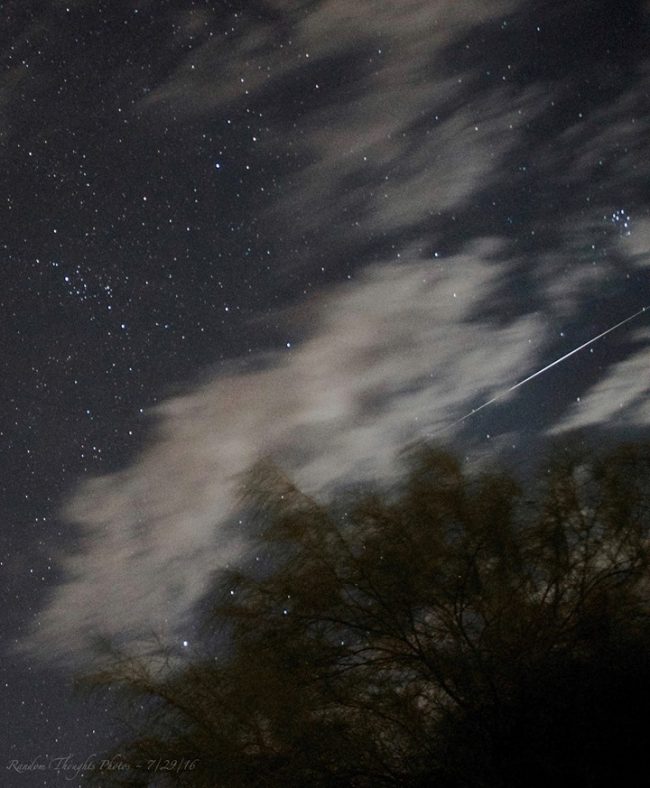 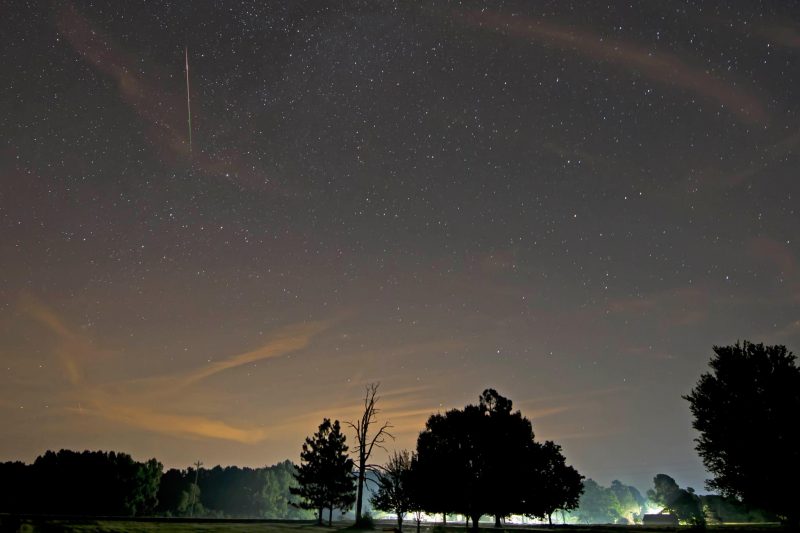 Early Perseid meteor caught on the morning of July 25, 2016 by Ken Christison. Start watching for these meteors! Thank you, Ken.