Jupiter and its 4 largest moons

Earth will soon pass between Jupiter and the sun, so the best time of year to see this giant planet is upon us. 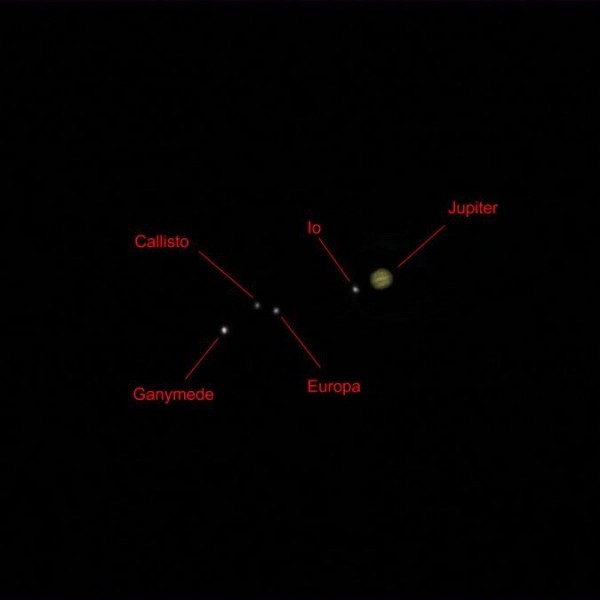 Kurt Zeppetello in Monroe, Connecticut, created this composite image of Jupiter and its moons on February 29, 2016. It’s timely because Earth will pass between Jupiter and the sun on March 8, bringing the planet to the place in our sky called opposition by astronomers. In other words, around the time we go between it and the sun, Jupiter is rising in the east as the sun sets in the west. It’s now visible all night, at its brightest for 2016. Kurt wrote:

After an imaging session and of course partially breaking down I noticed Jupiter rising over the trees of my backyard. So I went ahead and took some quick photos. I already put my computer and camera away but went back for the camera. The image is actually a combination of a short exposure (1/500s) image for Jupiter and a longer exposure (1/10s) image for the moons.

This photo is especially interesting, by the way, because the moons are all on one side of Jupiter. You don’t always see them that way. As they orbit around Jupiter, they appear in an ever-changing array of configurations.