Color image of the Martian surface, captured by the Ingenuity Mars helicopter. 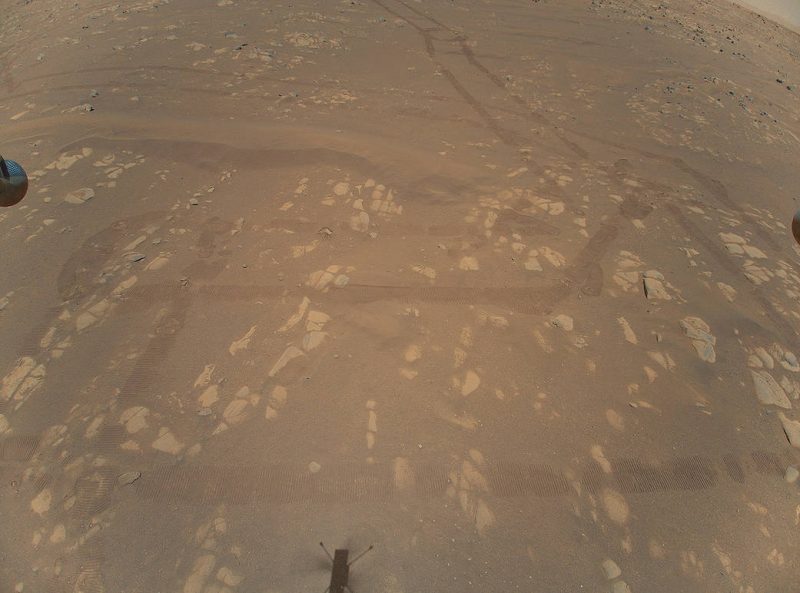 The Ingenuity Mars helicopter captured this image with its color camera during its second successful flight test on April 22, 2021. It’s the first color image of the Martian surface taken by an aerial vehicle while it was aloft. When Ingenuity snapped this photo, it was 17 feet (5.2 meters) above the surface. The winding parallel discolorations are the tracks of the six-wheeled Perseverance rover, located top center, just out of frame.

Ingenuity has now successfully flown three times. It flew for the first time in the thin air above the red planet on April 19, 2021. The second flight took place on April 22 and the most recent on April 25. The Perseverance rover’s camera’s captured Ingenuity’s third flight in the video, below.

Ingenuity arrived at Mars on February 18, 2021, along with the Perseverance rover, having made the long trek out to the red planet tucked inside the rover’s belly.

Bottom line: Color image of the Martian surface, captured by the Ingenuity Mars helicopter in flight in April 2021, and a video of Ingenuity’s third flight taken by the Perseverance Mars rover.