NASA’s Perseverance rover on Mars has just sent back its first initial science results, as well as some new audio recordings of wind and the rover’s laser zapping rocks. 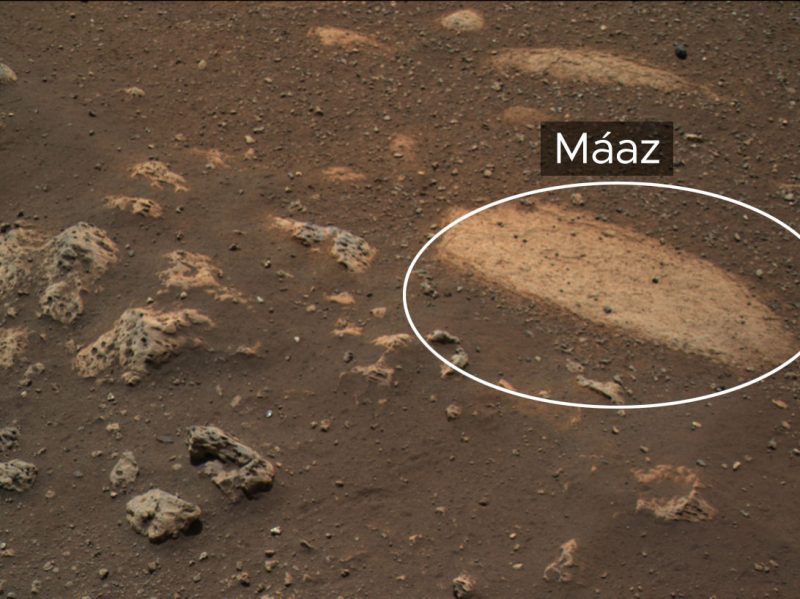 The first target for Perseverance’s SuperCam instrument was a flat, whitish rock that researchers have named Máaz, which is the Navajo word for Mars. Preliminary results show it has a basaltic composition. Image via NASA/ JPL-Caltech.

It’s been a month since NASA’s Perseverance rover landed on Mars on February 18, 2021. After initial testing of various components and systems, the rover has started traveling across the ancient lakebed in Jezero Crater. NASA said on March 10 that its first science results were already arriving on Earth, as as well as some new audio recordings of wind and the spacecraft’s laser zapping rocks.

These early science findings from Perseverance come from the rover’s SuperCam instrument, which uses a camera, laser and spectrometers to look for organic compounds. The results include not only the first analysis of a target rock, but also the first audio clips of SuperCam zapping the rock with its laser. As Roger Wiens, the principal investigator for SuperCam, said in a statement:

It is amazing to see SuperCam working so well on Mars. When we first dreamed up this instrument eight years ago, we worried that we were being way too ambitious. Now it is up there working like a charm.

The first target for SuperCam was a flat, whitish rock that researchers have named Máaz, which is the Navajo word for Mars. Preliminary analysis shows that Máaz is basaltic in composition and is either igneous (volcanic) or is composed of fine grains of igneous material cemented together by water. Further study will be needed to figure out which it is, since Perseverance did land in an ancient lakebed, but there are also other volcanic deposits in the region.

The rover has also examined another rock called Yeehgo, which in Navajo means diligent. That’s a good word to describe human exploration of Mars, which has been slow but sure since the first successful flyby of Mars (Mariner 4) in 1965. In all there’ve been 49 missions to Mars (including the unsuccessful ones), a world that appears more and more fascinating the closer we look. 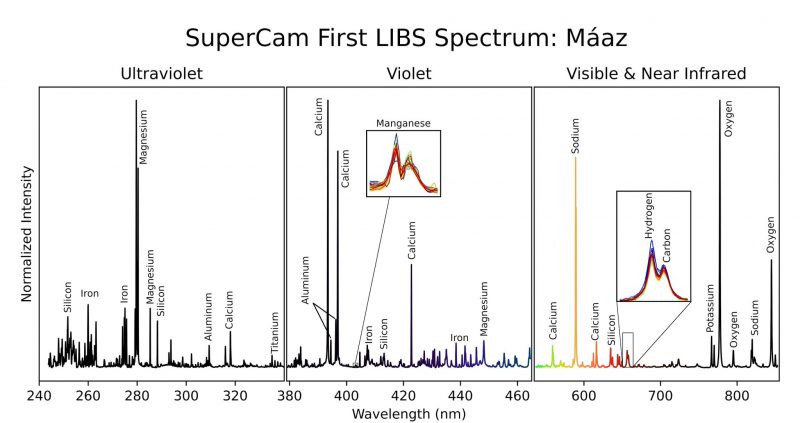 LIBS Spectrum from SuperCam on Perseverance showing the composition of the Máaz rock target. The rock is basaltic and basaltic and is either igneous (volcanic) or is composed of fine grains of igneous material cemented together by water. Image via NASA/ JPL-Caltech/ LANL/ CNES/ CNRS/ USGS/ Ryan Anderson. 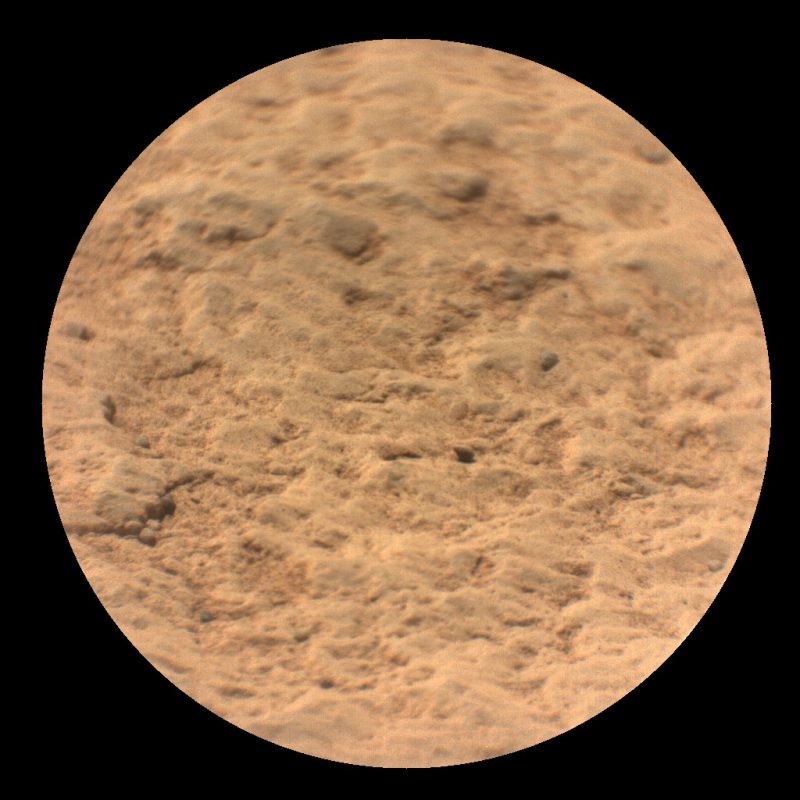 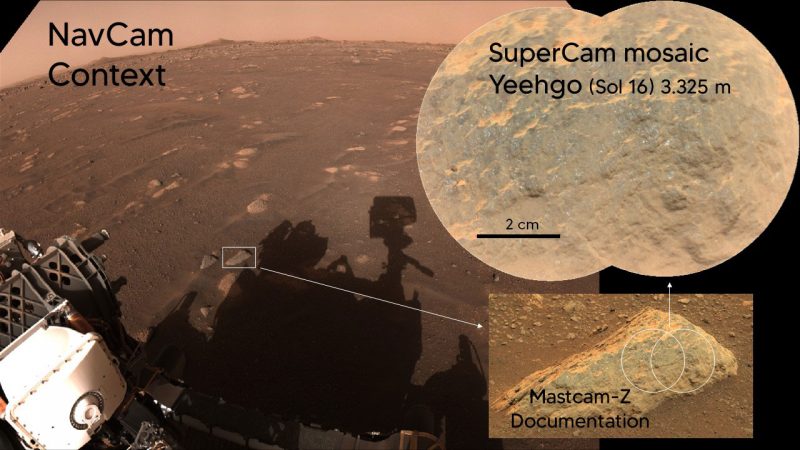 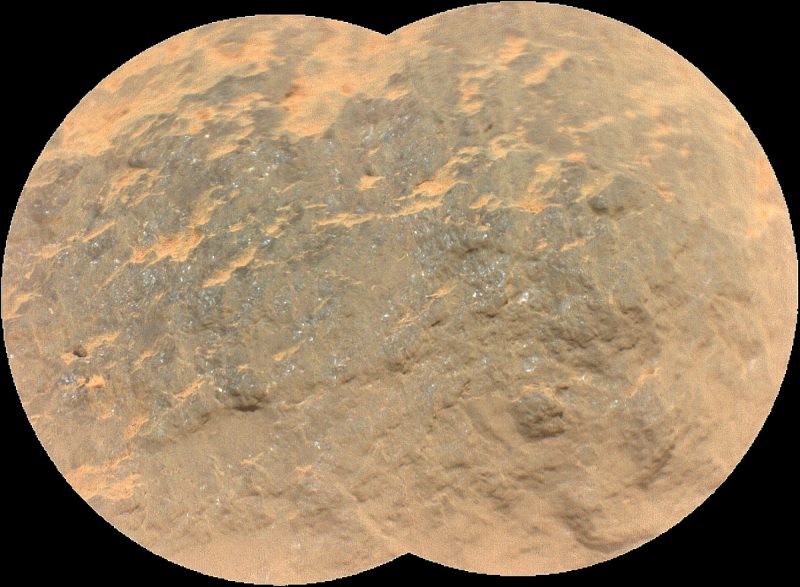 SuperCam has now sent back its first datasets from its Visible and InfraRed (VISIR) sensor and Raman spectrometer instruments. VISIR uses reflected sunlight, which there is plenty of on Mars, to examine the mineral compositions of rocks and soils. The Raman spectrometer uses a green laser beam for its observations. The laser “excites” the chemical bonds in the sample it is studying. The resulting signal tells scientists what kinds of elements have been bonded. According to Olivier Beyssac, CNRS research director at the Institut de Minéralogie, de Physique des Matériaux et de Cosmochimie in Paris:

This is the first time an instrument has used Raman spectroscopy anywhere other than on Earth! Raman spectroscopy is going to play a crucial role in characterizing minerals to gain deeper insight into the geological conditions under which they formed and to detect potential organic and mineral molecules that might have been formed by living organisms.

On March 2, 2021, the rover made the first-ever audio recording of its laser impacting a rock target 30 times, from a distance of  about 10 feet (3.1 meters). This was on sol 12 of the mission, with a sol being a Martian day, just slightly longer than a day on Earth. Naomi Murdoch, a research scientist and lecturer at the ISAE-SUPAERO aerospace engineering school, said:

The sounds acquired are remarkable quality. It’s incredible to think that we’re going to do science with the first sounds ever recorded on the surface of Mars!

You can hear slight variations in the intensity of the zapping as the laser hits different parts of the rocks that have varying hardness. Thomas Zurbuchen, Associate Administrator for the Science Mission Directorate at NASA Headquarters, commented:

I want to extend my sincere thanks and congratulations to our international partners at CNES and the SuperCam team for being a part of this momentous journey with us. SuperCam truly gives our rover eyes to see promising rock samples and ears to hear what it sounds like when the lasers strike them. This information will be essential when determining which samples to cache and ultimately return to Earth through our groundbreaking Mars Sample Return campaign, which will be one of the most ambitious feats ever undertaken by humanity.

These are only the first preliminary results from the Perseverance mission, and there is much more to come in the weeks, months and years ahead. The rover is now gradually making its way to the edge of the ancient river delta, not far from where it landed on February 18. Just like deltas on Earth, it was formed by a river emptying into a lake that used to exist in Jezero Crater. The layered sediments in the delta are an excellent place to search for possible evidence of ancient microbial life, which is the primary mission of Perseverance. 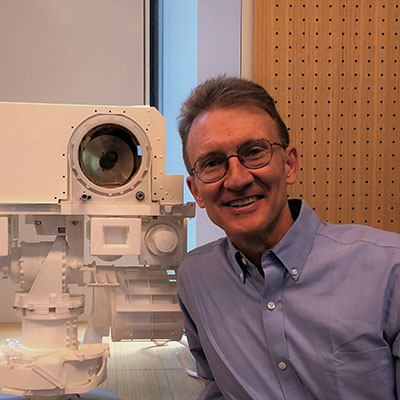 Roger Wiens is the principal investigator for the SuperCam instrument on Perseverance. Image via NASA.

The rover will search for chemical traces or other fossils of microbes that may still be present in the sedimentary layers or rocks. This is the first Mars mission since the Viking 1 and 2 landers in the late 1970s/ early 1980s to look directly for evidence of life. Other rovers and landers since then have focused on geology and studying the habitability of ancient Mars, rather than life itself.

Within the next few weeks, the mission team will also attempt the first test flight of the small drone-like helicopter called Ingenuity. If it works, it will be the first powered flight ever conducted on another planet. Ingenuity will fly ahead of the rover, acting as a scout to find interesting features for Perseverance to study closer.

Stay tuned for more updates from this exciting mission!

Bottom line: NASA’s Perseverance rover on Mars has just sent back its first initial science results as well as some new audio recordings.