Unusual sunset colors caused by the eruption of Calbuco volcano, caught by Helio C. Vital in Rio de Janeiro, Brazil, this past weekend. 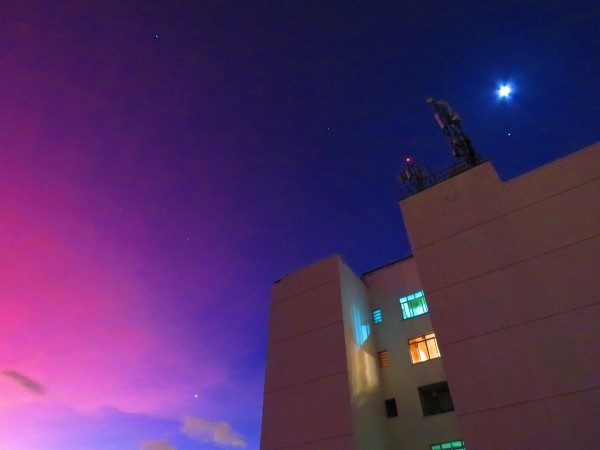 View larger. | Dramatic sunset colors in Rio – April 26, 2015 – due to the eruption of Calbuco volcano in Chile. On the upper left side of photo, Jupiter and the moon. To the lower right, beside the buildings, Venus. Photo by Helio C. Vital.

Helio C. Vital in Rio de Janeiro, Brazil submitted these wonderful photos of intense sunsets this weekend caused by the dramatic eruption of Calbuco volcano in Chile on April 22. He wrote:

This was an awesome display of unusual colors in Rio`s sunset skies produced by aerosols from Chile`s Calbuco volcano passing high above the city at the top of the troposphere (10-12 km height). Wonderful pink, pastel, orange and red colors could be seen adorning most of the western sky. Sometimes the illuminated plumes of aerosols reached as far to the northeast as Venus. Residual pink color lasted until an hour after sunset as captured by my camera. In decreasing order of concentration, particulate size and heights, based on what I observed, I would relate the following colors: red, orange, pastel and pink (in that order). Pink, associated to the tiniest and highest aerosols is quite unusual and it was the last color to become visible to the naked eye. Most of the time, the sky remained orange, although the camera was able to capture all colors most of the time.

What a fantastic display of Nature! Venus, Jupiter and the moon added to the show. 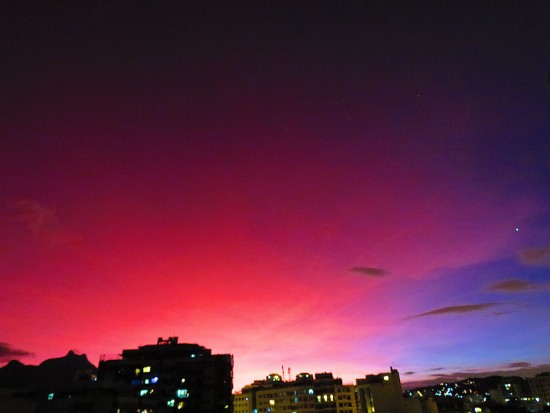 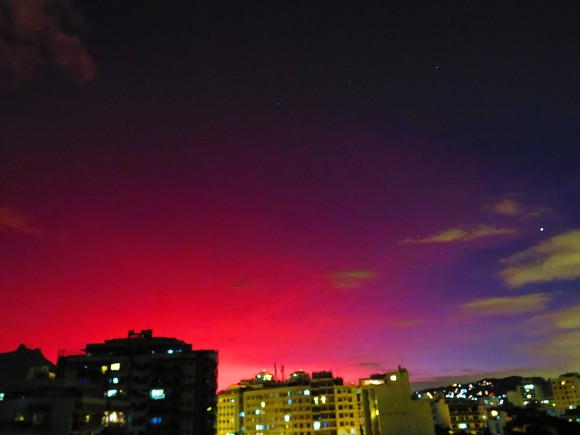 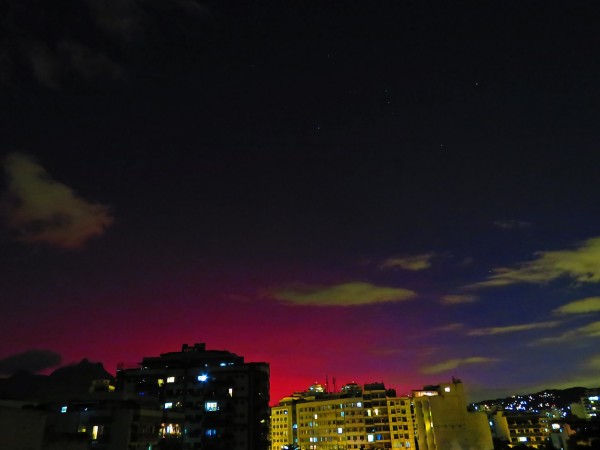 Volcanic eruptions can inject millions of tons of dust and gaseous sulfur dioxide into the stratosphere. The finer dust particles remain aloft for years and spread around the world while the sulphur dioxide evolves to an aerosol of sulfur acids that add to the particulates.

The dust and aerosol produce vivid sunset and twilight effects like the intense yellow-red horizon and purple-pink glows of the photograph. The purple glow is probably a combination of red-orange light transmitted through the lower atmosphere and scattered blue light from still sunlit stratospheric dust.

Dramatic sunset colors from a volcano in one part of the world can persist for many months and be seen across the globe. When Mount Pinatubo erupted in the Philippines in 1991, its afterglows persisted to varying degrees for about 18 months after the initial explosion, according to Stephen F. Corfidi at NOAA/NWS Storm Prediction Center.

Bottom line: Watch a sunset! Maybe you’ll see some beautiful colors, caused by the eruption of Calbuco volcano in Chile.