Sunrise at the moon’s Bhabha crater

A day on the moon lasts about an earthly month, so dawn comes to each part of the moon only that often. In this view from NASA’s Lunar Reconnaissance Orbiter, you can see a crater’s central peak illuminated by sunlight, while the crater floor remains dark.

View larger. | Sunrise at Bhabha crater, where sunlight hasn’t yet reached the crater floor after the moon’s 2-week night. You can see the crater’s central peak rising from the shadows of dawn. Note that a portion of the eastern rim (bottom of image) is still in shadow due to highstanding terrain just outside of the scene. Image via NASA/GSFC/Arizona State University/LROC.

NASA’s Lunar Reconnaissance Orbiter captured this image of dawn over Bhabha crater on August 28, 2019. Bhabha, on the far side of the moon, is about 50 miles (80 km) wide. It’s named for the physicist Homi Jehangir Bhabha (1909-1966), a nuclear physicist of India. It’s part of the South Pole–Aitken (SPA) basin, an immense impact crater on the moon’s far side, roughly 1,600 miles (2,500 km) in diameter. China’s Chang’e 4 spacecraft landed within this basin earlier this year. Bhabha crater is important to space scientists in its own way. NASA wrote:

Its location within SPA means that the impact event exposed material that originally resided deep within the moon, but was excavated and melted by the giant SPA impact event. 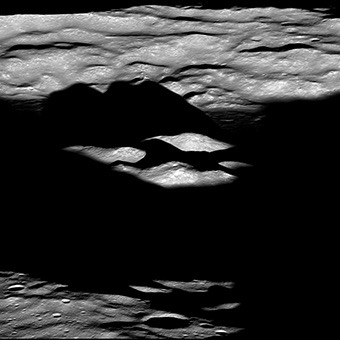 View larger. | A close-up of the image above, showing the central peak of Bhabha crater. Image acquired on August 28, 2019. View is from east to west. North is to the right. Visible portion of central peak complex is about 9 miles (14 km) wide. Image via NASA/GSFC/Arizona State University/LROC.