China’s Chang’e-4 spacecraft set down last night, according to clocks in the Americas. It’s a historic event, the first time a spacecraft has landed on the side of the moon we cannot see. 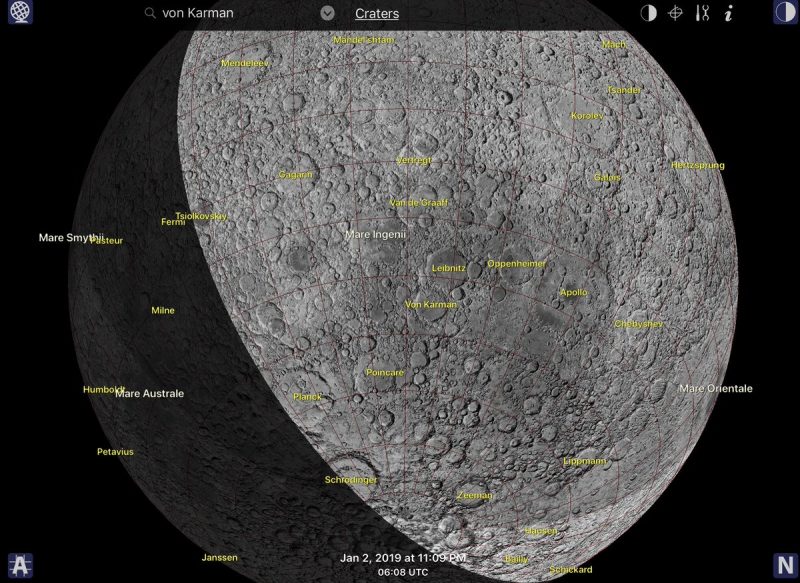 The Chinese Chang’e-4 moon lander touched down in the Von Kármán crater on the moon’s far side. No, the far side of the moon does not always stay dark. In fact, Chang’e-4 mission controllers waited for sunrise over this region to set the lander down. Simulation of lunar far side today, via Alan Dyer (@amazingskyguy on Twitter).

More space history this week, besides the smallest space object ever orbited, and the most distant object yet visited. Last night, according to clocks in the Americas – January 3, 2019, at 02:26 UTC (10:26 a.m. Beijing time; January 2 at 10:26 p.m. on the U.S. East Coast) – China’s Chang’e-4 spacecraft successfully landed on the moon’s far side.

Chinese state media announced the event. The spacecraft landed in Von Kármán crater, located on the lunar far side within the South Pole-Aitken basin. Jason Davis at the Planetary Society wrote:

Chang’e-4 itself launched on December 8, 2018. It entered lunar orbit four days later, where mission controllers spent 22 days testing the spacecraft’s systems, waiting for the sun to rise at the landing site. [On January 2-3, 2019] Chang’e-4 successfully de-orbited and landed.

Scientists say Chang’e-4’s landing site is an area where an ancient impact by space debris pounded the moon long ago, possibly exposing some of the lunar mantle, the layer beneath its crust. So it’s an interesting region geologically. Chinese scientists hope to learn more about the early history of our moon (and by extension the Earth and rest of the solar system) by studying this region via Chang’e-4.

The spacecraft is a combination lander-rover. At this writing, there’s no word that the rover has been deployed, but that’s expected soon. Stay tuned!

It’s a space feat no nation has accomplished until now: China’s Chang’e-4 spacecraft has successfully landed on the far side of the Moon! https://t.co/r2hUnAK8mx pic.twitter.com/zhn8zS2A5I

The Chinese Chang’e Moon lander touched down in the Von Karman crater in the large South Pole-Aitken Basin on the lunar farside, an area that just had sunrise and is starting a two-week-long lunar day. pic.twitter.com/1O9MGZAn5y

#ChangE4's rover may descend around 1030 UT (Jan 3) but it's bedtime now… good night folks. It has been a fun day, commenting an American mission (#MU69flyby) on Chinese social media and then tweeting a Chinese mission here. 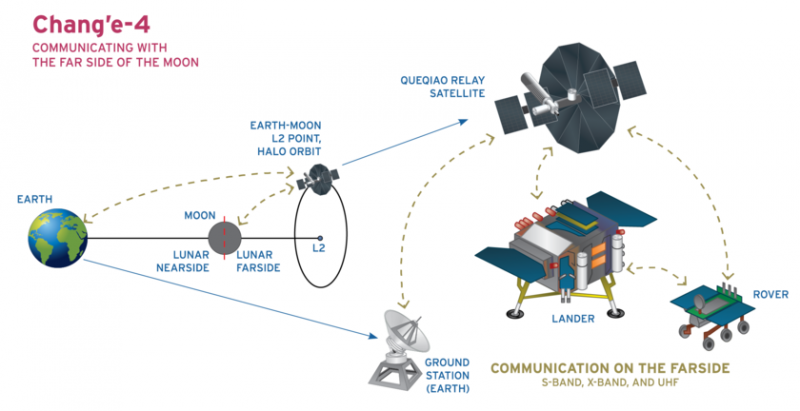 Bottom line: China’s Chang’e-4 spacecraft set down on the moon’s far side on January 3, 2019, at 02:26 UTC. It’s the first time a spacecraft has landed on the far side of the moon.