On December 31 – while we celebrated – NASA’s OSIRIS-REx spacecraft went into orbit around Bennu, a near-Earth asteroid. The maneuver makes Bennu the smallest object yet to be orbited by a spacecraft.

Yesterday – while many on Earth were ringing in the New Year – a NASA spacecraft 70 million miles (110 million km) away was breaking a space exploration record. NASA’s OSIRIS-REx spacecraft carried out a single, eight-second burn of its thrusters and entered into orbit around near-Earth asteroid Bennu, making Bennu the smallest object yet to be orbited by a spacecraft. And Bennu is, indeed, very small. It has a mean diameter of approximately 1,614 feet (0.306 miles; 492 meters). The burn took place on December 31, 2018, at 18:43 UTC (2:43 p.m. EST). Dante Lauretta, OSIRIS-REx principal investigator at the University of Arizona Tucson, said:

The team [performed] the orbit-insertion maneuver perfectly. With the navigation campaign coming to an end, we are looking forward to the scientific mapping and sample site selection phase of the mission.

Entering orbit around Bennu is an amazing accomplishment that our team has been planning for years.

A statement from the team pointed out that Bennu – named for an ancient Egyptian mythological bird associated with the sun, creation, and rebirth – has barely enough gravity to keep a vehicle in a stable orbit.

The previous record-holder for closest orbit of a planetary body was the Rosetta spacecraft, which orbited about four miles (6.4 km) from the center of comet 67P/Churyumov-Gerasimenko in May 2016. OSIRIS-REx is much closer to Bennu, about a mile (1.6 km) from its center. This distance is necessary to keep the spacecraft locked to Bennu, these space scientists said, because Bennu’s gravity is only five-millionths as strong as Earth’s.

The spacecraft is scheduled to orbit Bennu through mid-February at a leisurely 62 hours per orbit. 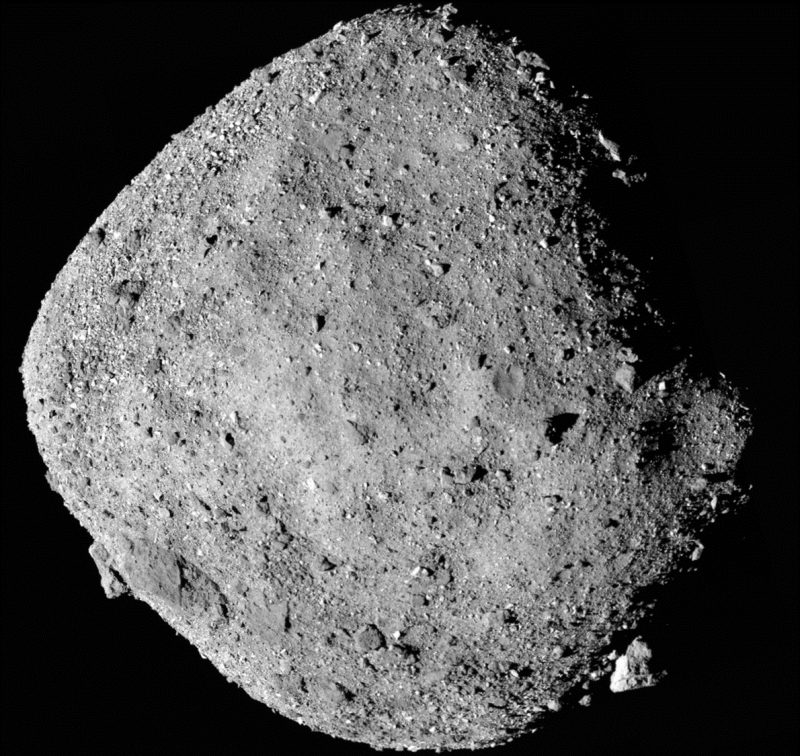 This mosaic image of asteroid Bennu is composed of 12 PolyCam images collected on December 2, 2018, by the OSIRIS-REx spacecraft from a range of 15 miles (24 km). Image via NASA/Goddard/University of Arizona.

Our orbit design is highly dependent on Bennu’s physical properties, such as its mass and gravity field, which we didn’t know before we arrived.

Up until now, we had to account for a wide variety of possible scenarios in our computer simulations to make sure we could safely navigate the spacecraft so close to Bennu. As the team learned more about the asteroid, we incorporated new information to hone in on the final orbit design.

Even though OSIRIS-REx is in the most stable orbit possible, the team said, Bennu’s gravitational pull is so tenuous that keeping the spacecraft safe will require occasional adjustments. Dan Wibben, OSIRIS-REx maneuver and trajectory design lead at KinetX Aerospace in Simi Valley, California, said:

The gravity of Bennu is so small, forces like solar radiation and thermal pressure from Bennu’s surface become much more relevant and can push the spacecraft around in its orbit much more than if it were orbiting around Earth or Mars, where gravity is by far the most dominant force.

One critical objective of this orbital phase, the team said, is to get a better handle on Bennu’s mass and gravity, features that will influence the planning of the rest of the mission, notably the short touchdown on the surface for sample collection in 2020. In the case of Bennu, scientists can only measure these features by getting OSIRIS-REx very close to the surface to see how its trajectory bends from Bennu’s gravitational pull.

The OSIRIS-REx mission is scheduled to deliver the sample to Earth in September 2023.

Asteroid Bennu is considered a potentially hazardous object because its orbit carries it near Earth and it is large enough to cause significant damage in the event of an impact. It has a cumulative 1-in-2,700 chance of impacting Earth between 2175 and 2199.

Read more from University of Arizona 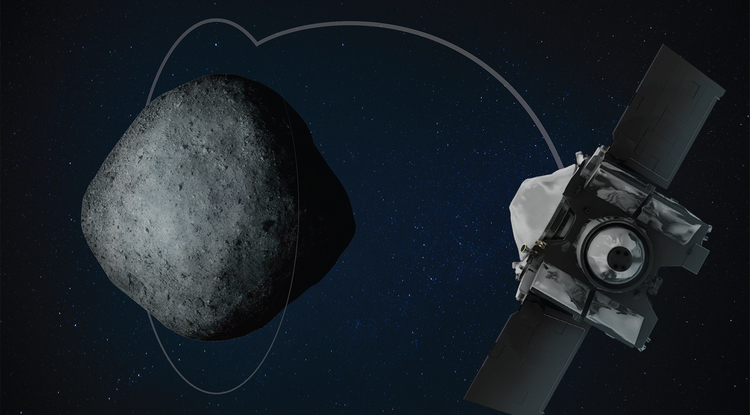 Artist’s concept of OSIRIS-REx spacecraft at asteroid Bennu. The craft is scheduled for a sample collection in 2020 and sample return to Earth in 2023. Image via Heather Roper/University of Arizona.

Bottom line: NASA’s OSIRIS-REx spacecraft successfully carried out a burn on on December 31, 2018, at 18:43 UTC (2:43 p.m. EST) and thereby went into orbit around near-Earth asteroid Bennu. The maneuver makes Bennu the smallest object yet to be orbited by a spacecraft.