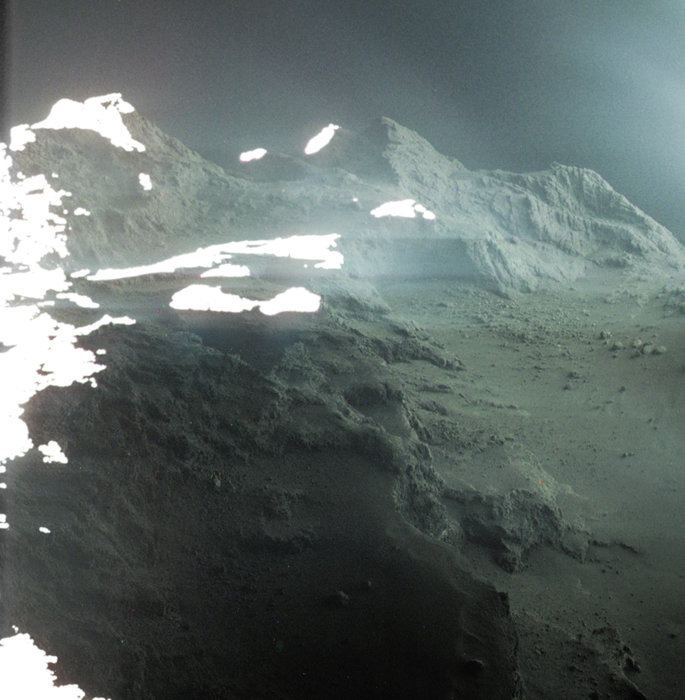 Comet 67P/Churyumov-Gerasimenko as seen by the Rosetta spacecraft on September 22, 2014. Amateur astronomer Jacint Roger Perez, from Spain, processed this image, which is via ESA/Rosetta/MPS for OSIRIS Team MPS/UPD/LAM/IAA/SSO/INTA/UPM/DASP/IDA; J. Roger.

The European Space Agency (ESA) has been celebrating its Rosetta spacecraft, which was the first (and still only) craft to give us extremely close-up images of a comet. Rosetta ended its mission to comet 67P/Churyumov-Gerasimenko on September 30, 2016, with a controlled impact on the comet’s surface. Prior to that, it had monitored cometary evolution – in a way never seen before – for about a year before and after 67P came closest to the sun in August 2015. On October 1, 2018, ESA released this image of the comet. Haunting, isn’t it? It shows a portion of the comet as viewed by Rosetta only 1 1/2 months after Rosetta began orbiting 67P in September 2014. At the time of the image above, the spacecraft was just over 16 miles (26.2 km) from the comet’s surface. Amateur astronomer Jacint Roger Perez, from Spain, selected and processed this view by combining three images taken in different wavelengths by the OSIRIS narrow-angle camera on Rosetta. ESA said in a statement:

Seen in the center and left of the frame is Seth, one of the geological regions on the larger of the two comet lobes, which declines towards the smoother Hapi region on the comet’s ‘neck’ that connects the two lobes. The landscape in the background reveals hints of the Babi and Aker regions [see map below for the geologic regions on the comet, in context].

The sharp profile in the lower part of the image shows the Aswan cliff, a 134-meter-high [439-foot-high] scarp separating the Seth and Hapi regions. Observations performed by Rosetta not long before the comet’s perihelion, which took place on August 13, 2015, revealed that a chunk of this cliff had collapsed – a consequence of increased activity as the comet drew closer to the sun along its orbit. 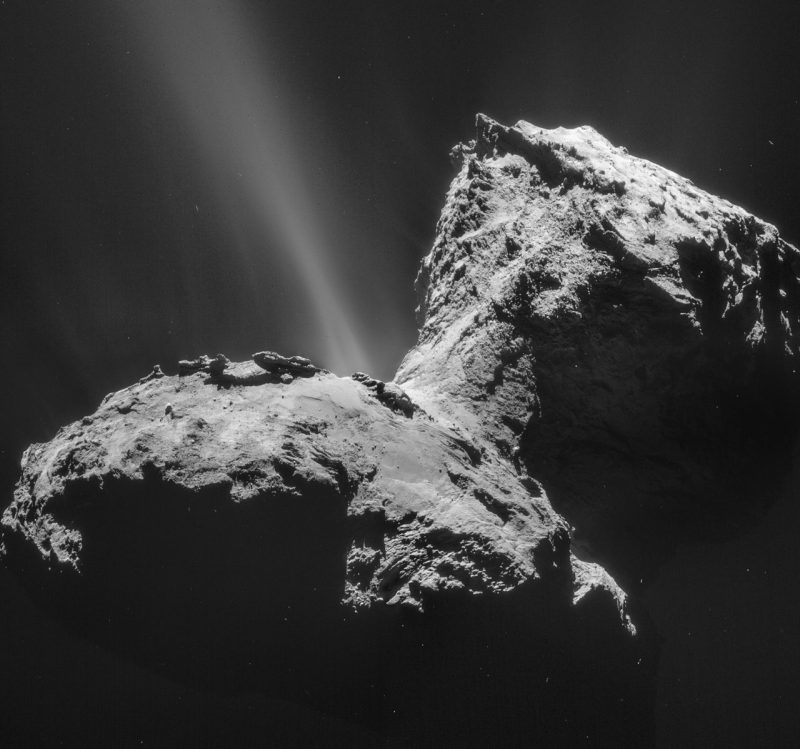 Before Rosetta, no one knew comets looked like this. Rosetta followed comet 67P/Churyumov-Gerasimenko to its closest point to the sun and beyond. As the comet neared the sun, the spacecraft’s cameras saw jets erupting from the comet. Image via ESA’s Rosetta spacecraft/NASA. 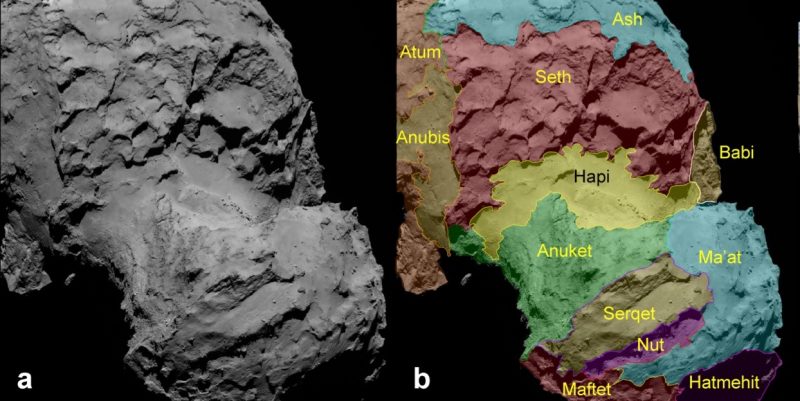 As the images rolled in from Rosetta, scientists gave names to the various regions on the surface of 67P, to aid in their discussions. Image via Astronomy & Astrophysics.

By the way, this isn’t the first time that Jacint Roger Perez has done an amazing job processing a Rosetta spacecraft image. He also stitched together the animation below, which shows dust and ice particles near the comet’s surface:

Who knew we’d ever see such a thing?

Generally speaking, thanks to both professional and citizen scientists, the Rosetta mission to comet 67P/Churyumov-Gerasimenko has been one of the most mind-expanding we’ve had so far. ESA launched the Rosetta spacecraft in 2004. The craft took 10 Earth-years to reach the comet, ultimately making six orbits around the sun. Its journey included three Earth flybys, a Mars flyby, and two asteroid encounters. The craft endured 31 months in deep-space hibernation on the most distant leg of its journey, before waking up in January 2014 and finally arriving at the comet in August 2014. And that’s when the fun really began.

ESA is proud of the mission and invites you to:

Explore the full [Rosetta] mission image archive yourself and let us know what hidden treasures you find via @esascience. 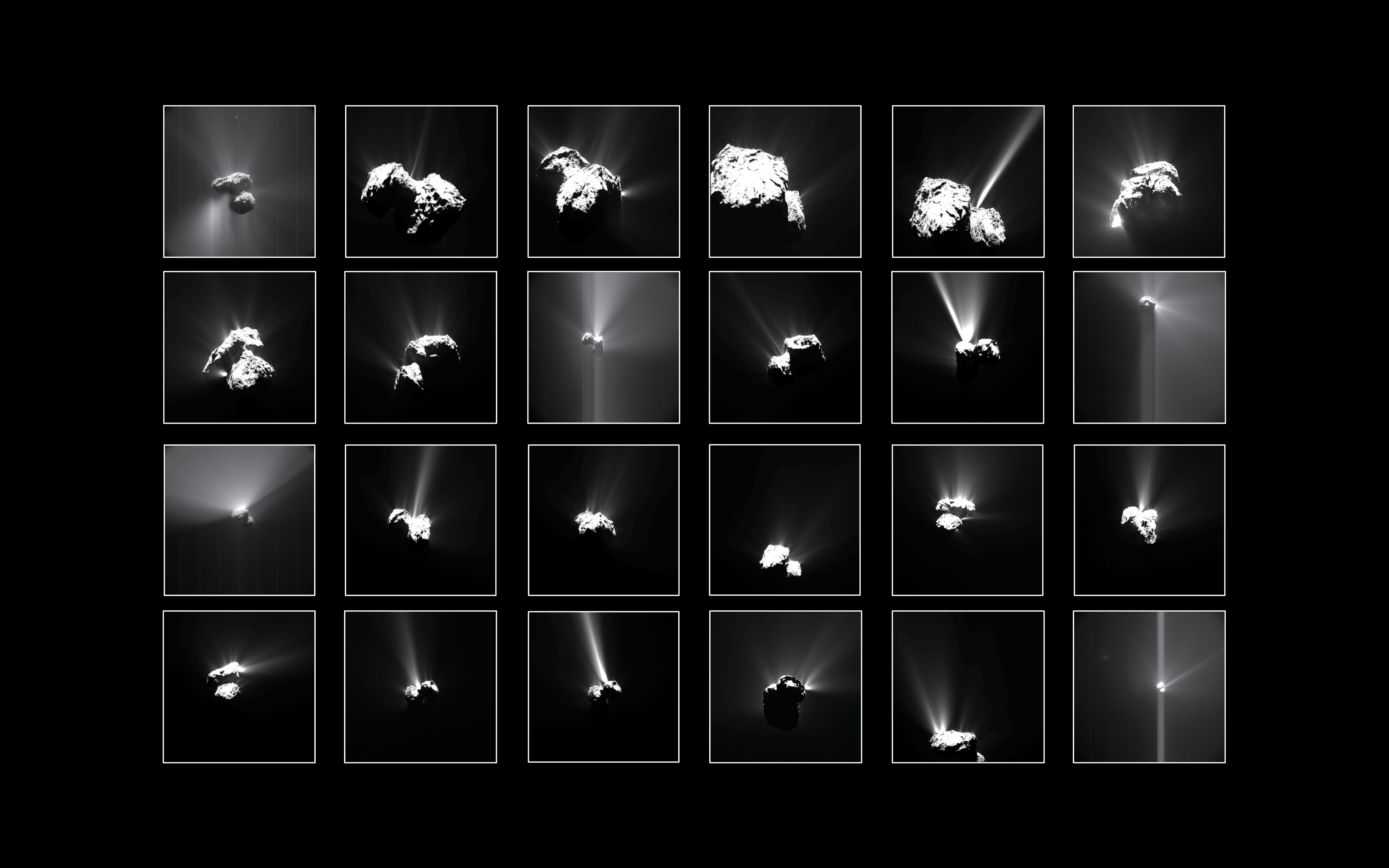 View larger. | Compilation of the brightest outbursts seen at Comet 67P/Churyumov–Gerasimenko by Rosetta spacecraft between July and September 2015, via ESA.