Landslides and avalanches on comets might keep them active, when closest to the sun, much longer than expected. They might even bring some dormant comets back to life! 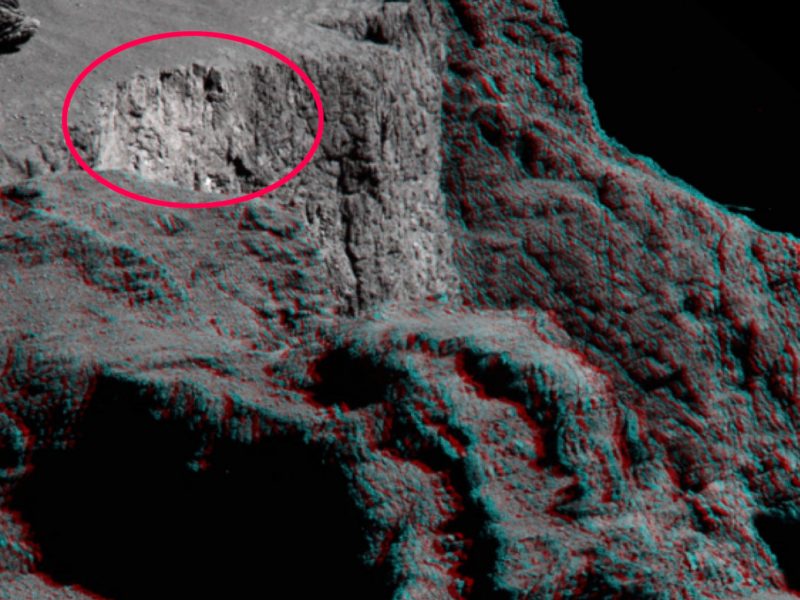 View larger. | Here’s what a landslide on a comet looks like. Notice its brightness. After the landslide in 2015, this cliff was 6 times brighter than the usual surface of this comet, likely because the landslide exposed the comet’s icy interior. Image of comet 67P/Churyumov-Gerasimenko acquired June 10, 2016 by ESA’s Rosetta spacecraft. Via News.Sky.com.

The Planetary Science Institute (PSI) in Tucson, Arizona, said on September 10, 2018, that its scientists have established a link between landslides on comets and the comets’ long-term activity. ESA’s Rosetta spacecraft observed many such events – which scientists call mass wasting events – on the surface of comet 67P/Churyumov-Gerasimenko during the spacecraft’s 2014-2016 orbit around the comet. This comet, whose orbit around the sun is brief, only 6.45 Earth-years long, reached perihelion – its closest point to the sun – in 2015, in the middle of Rosetta’s mission. Thus Rosetta was able to view the comet at its most active, when it was most furiously releasing gases through the process of sublimation, and many insights were gained.

Now, as they’ve continue to analyze Rosetta’s data, some scientists have concluded that landslides and avalanches on a comet might keep it actively producing gases when nearest the sun – orbit after orbit – on timescales perhaps hundreds of times longer than expected.

The new paper is by Jordan Steckloff and Nalin Samarasinha, both of the Planetary Science Institute, and it’s published in the peer-reviewed journal Icarus (preprint here). PSI’s statement about the new work paints a picture of comets near the sun:

… escaping gases loft dust off of the comet, forming a dust cloud visible from the Earth. This gas release can even change the spin state of the comet. However, this process has long been expected to shut down as the ice present at the surface of the comet sublimates away, leaving a dust layer at the surface that insulates the remaining subsurface ice.

It has therefore been unknown how comets remain active, rather than fade into non-active objects. 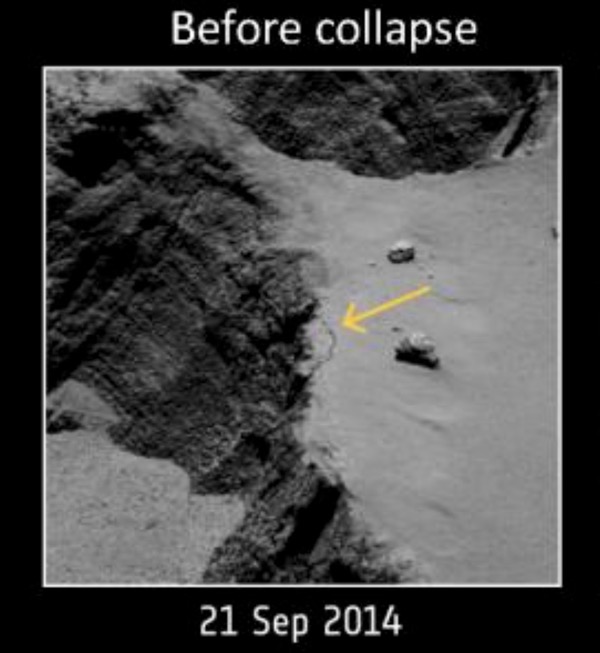 View larger. | This is the “before” image for 1st landslide ever recorded on a comet. It’s a 100-meter-long cliff – in the Aswan region of comet 67P/Churyumov-Gerasimenko – captured by ESA’s Rosetta spacecraft on September 21, 2014. In this image, you can see a crack forming behind the cliff that preceded its collapse. Image via ESA/Planetary Science Institute. 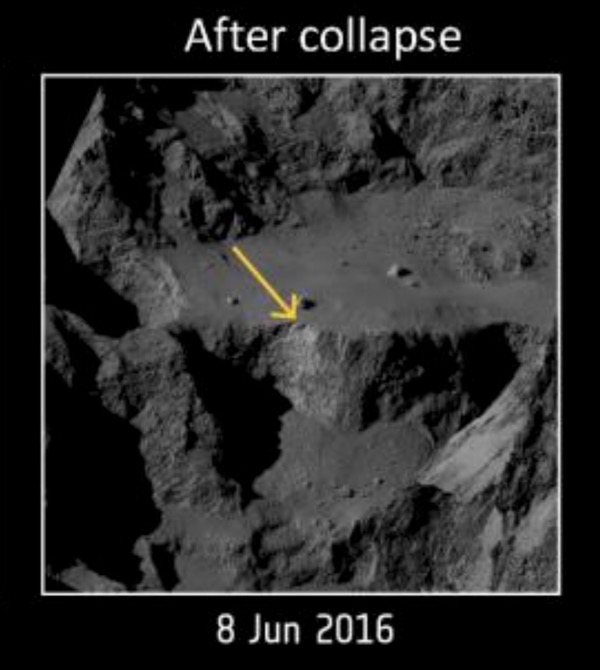 Here’s the “after” image, captured June 8, 2016. In this image, notice the debris clearly visible at the base of the cliff. The Rosetta spacecraft observed many mass wasting events – aka landslides and avalanches – on the surface of comet 67P/Churyumov-Gerasimenko. Image via ESA/Planetary Science Institute.

Nalin and I independently developed our own models to study how sublimating gases that escape from a comet’s surface generate torques that change the comet’s spin state. However, our models approached this problem from two completely different perspectives.

It was by comparing their models that Steckloff and Samarasinha that landslides and avalanches are critical to maintaining sublimative activity on comets.

What’s more, these scientists said, their work provides a mechanism for reactivating dormant comets and might help explain how comets such as 2P/Encke – which sweeps in closest to the sun once every 3.3 years – remain active. Comet Encke took so long to evolve into its current orbit, that it should have long ago run out of ices to sublimate. Yet we still see it as an active comet. Jordan Steckloff, lead author of the new study, told EarthSky:.

Comet Encke likely evolved into its current orbit over ~80,000 orbits of the sun. If it were to have exhibited sublimative activity throughout this evolution, it should have run out of ices after only ~400 orbits. This suggests that Encke was likely dormant (not actively sublimating) for most of this migration.

And, if so, then there needs to be some mechanism for reactivating the comet once it reached its current orbit.

Landslides and avalanches on Comet Encke could provide that mechanism.

Bottom line: According to a new study, landslides and avalanches on comets keep them actively sublimating gases, when closest to the sun, much longer than could be expected if no such events occurred.

Source: The Sublimative Torques of Jupiter Family Comets and Mass Wasting Events on their Nuclei