An artist’s concept – and a real photo – from the first-ever impact from an earthly space probe onto the surface of a comet. 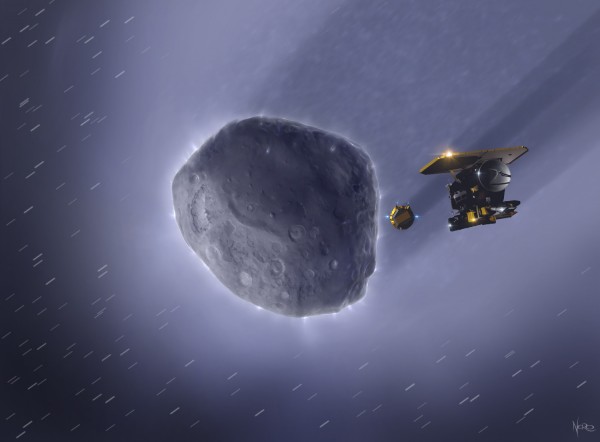 After 174 days of space travel, the Deep Impact probe released an “impactor” carrying a copper payload (since scientists didn’t expect the comet to contain copper… and the metal wouldn’t interfere with the scientific instruments aboard the probe).

Delivering 100kg of copper at a closing velocity of more than 10km/s, the impactor’s kinetic energy was equivalent to 4.8 metric tons of TNT. The resulting collision exposed the interior of the comet’s nucleus and answered questions concerning comet composition.

Marco Nero – who is in Sydney, Australia – is working on a book on the subject of meteorite hunting and collecting. This is one of the images he created to go along with an article on comets.

By the way, the collision between the coffee table-sized impactor and city-sized comet was the first of its kind. Read more about the Deep Impact mission to Comet Tempel 1, from NASA. 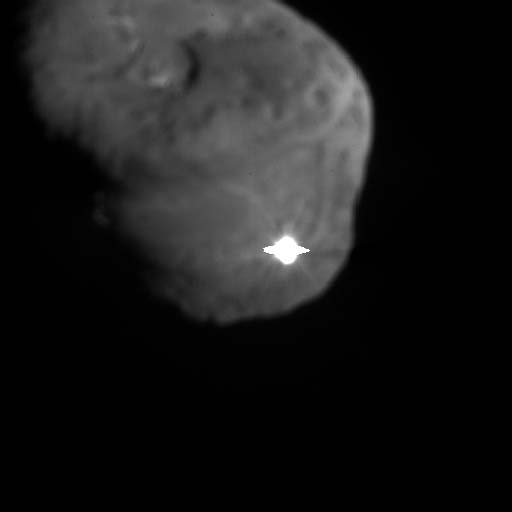 Here’s an actual image – a photo – taken by Deep Impact as its impactor hit Comet Tempel 1. The image depicts the first moments after Deep Impact’s probe interfaced with the comet. Image via NASA/JPL-Caltech/UMD. Read more about this image.

Bottom line: An artist’s concept – and a real photo – from the first ever impact from an earthly space probe, NASA’s Deep Impact probe, onto the surface of a comet. The comet was Tempel 1. The impact took place on July 4, 2005.