December’s full supermoon was the closest and brightest full moon of 2017. Wonderful photos here from the EarthSky community around the world.

Read more: When is the next supermoon? 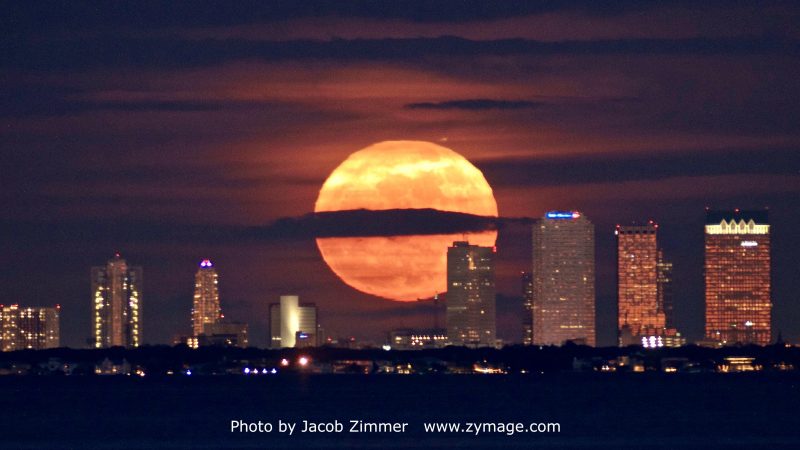 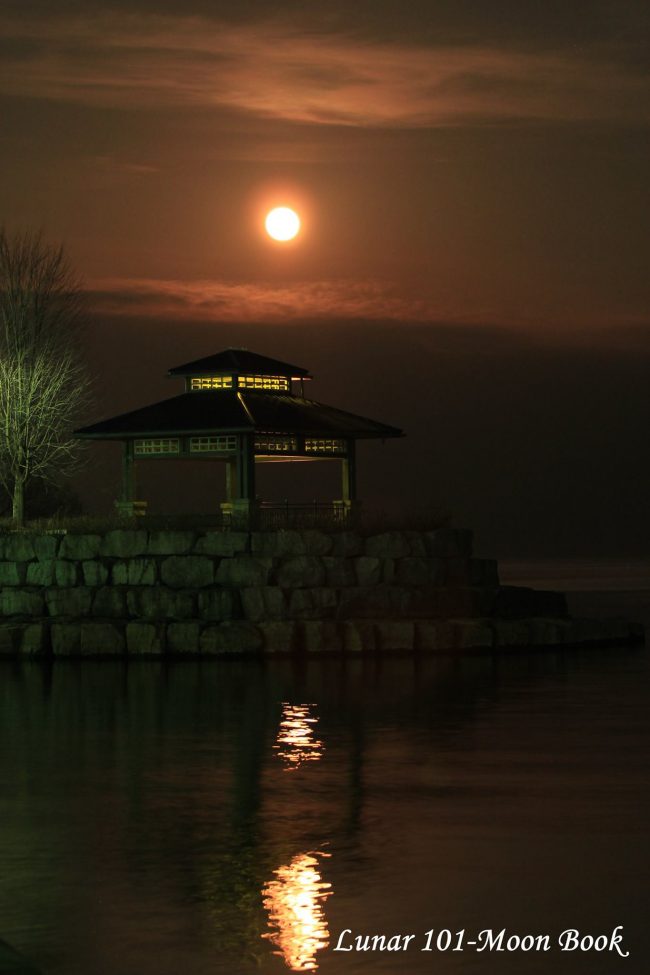 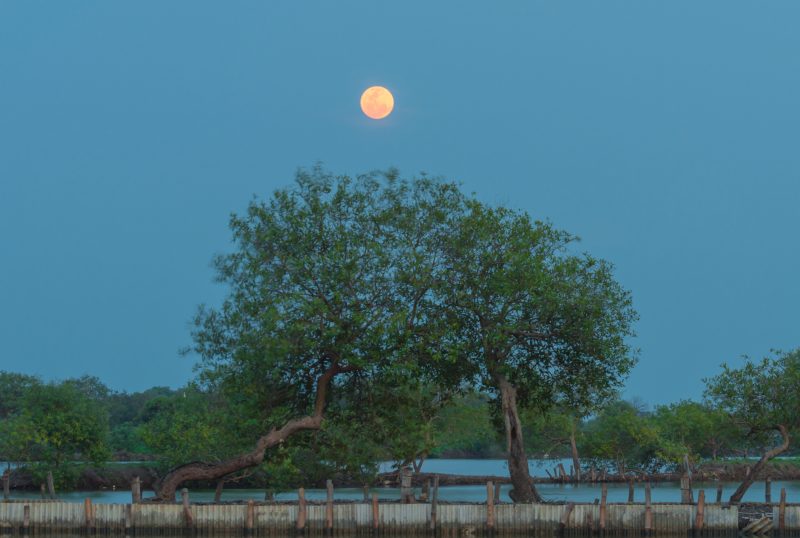 Martin Marthadinata in Surabaya, East Java, Indonesia wrote on December 3, 2017: “Today is supermoon, the last of 2017. I took this image over Juanda International Airport, just 20 minutes after moonrise at altitude 5 degrees from horizon.” 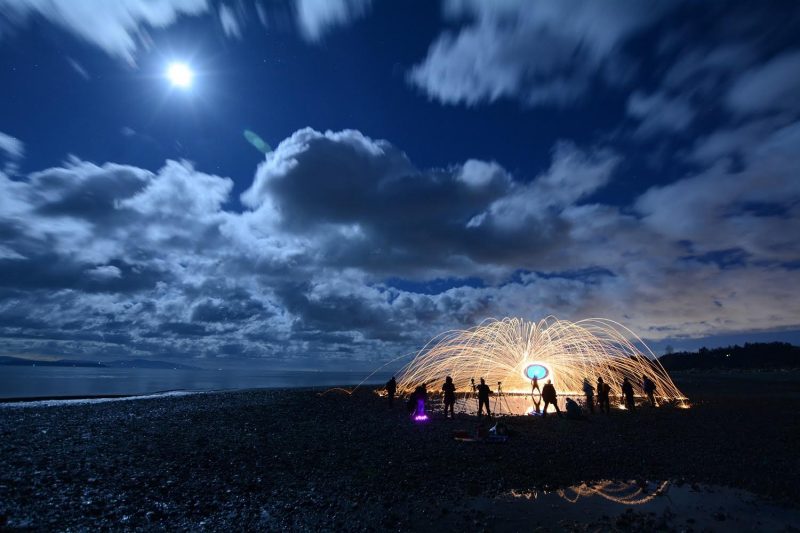 To the eye alone, a supermoon probably doesn’t look any larger than an ordinary full moon (although it might look brighter). But Earth’s oceans feel the gravity of the extra-close supermoon, which causes particularly high and low tides. James Younger wrote on December 3, 2017: “I held a low-tide supermoon photography event at Island View Beach, Vancouver Island, B.C. and took a photo of a few people.” 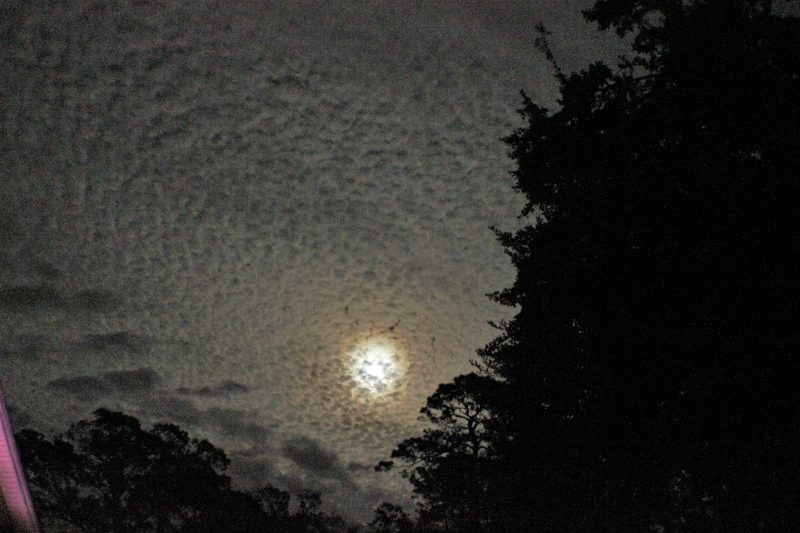 Patrick Prokop caught the nearly full moon on the evening of December 2, 2017, rising into what’s called a mackerel sky. He wrote: “This full moon is occurring just before it reaches perigee (closest approach to Earth in its orbit) at 222,100 miles. This makes it look a bit bigger and brighter than other full moons. Plus, it is causing the morning high tides to be abnormally high.” 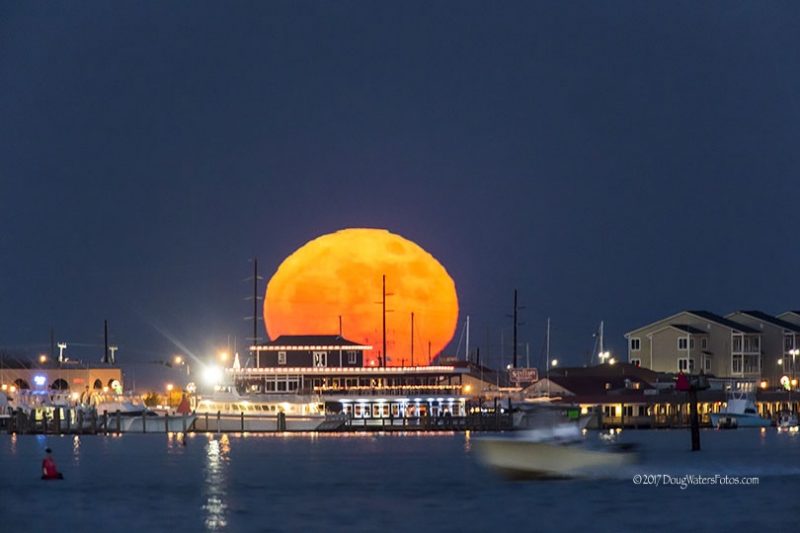 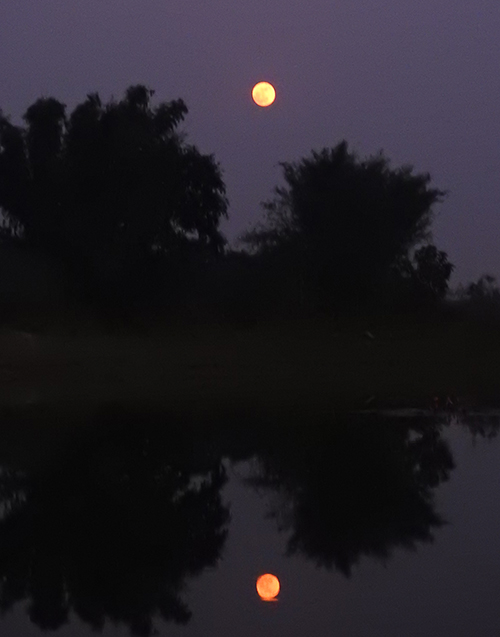 Swami Krishnananda in West Bengal, India wrote on December 3: “This photo was taken this evening just outside the city of Purulia, India, as the supermoon came up around 5.30 p.m. Its image is reflected in a pond.” 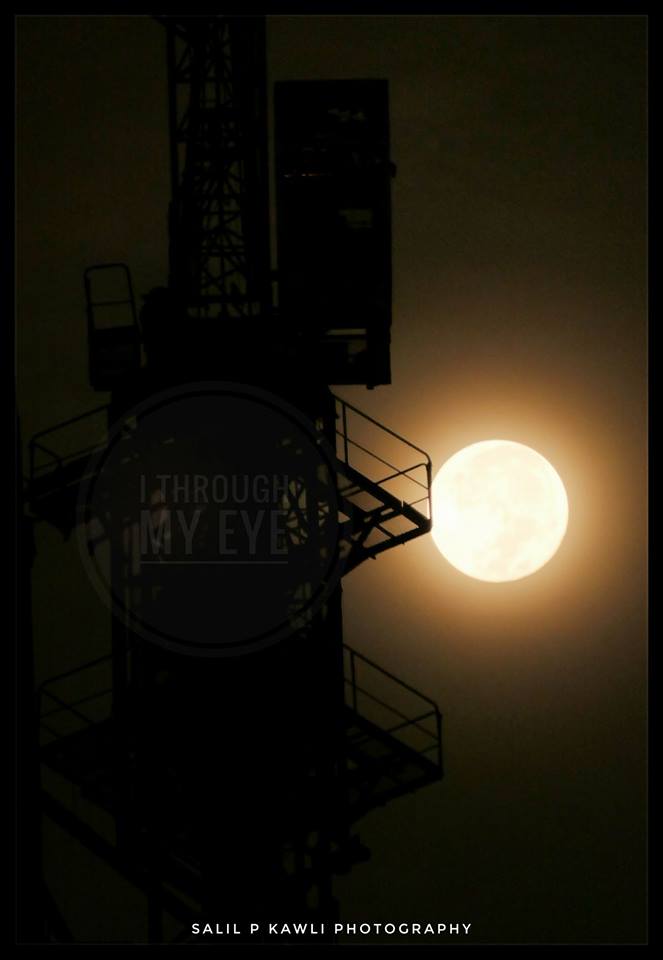 Salil Kawli got up early on December 4 to capture the full supermoon of 2017 setting west of Mumbai, India. 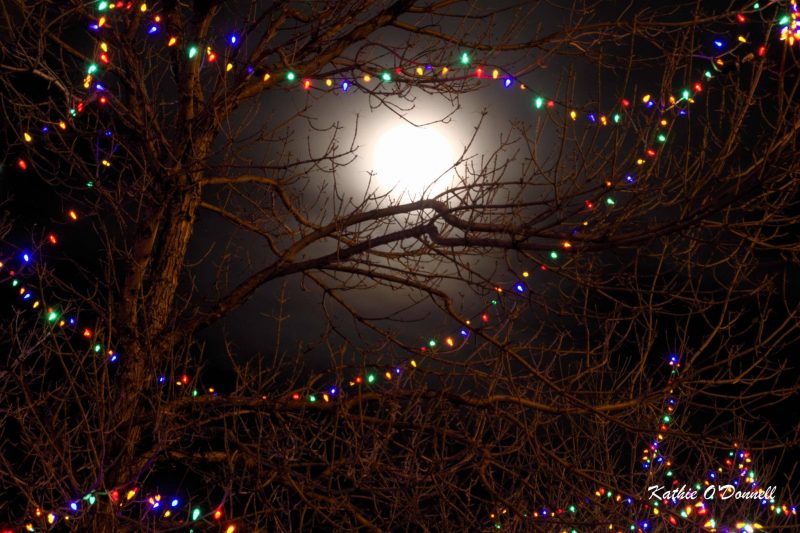 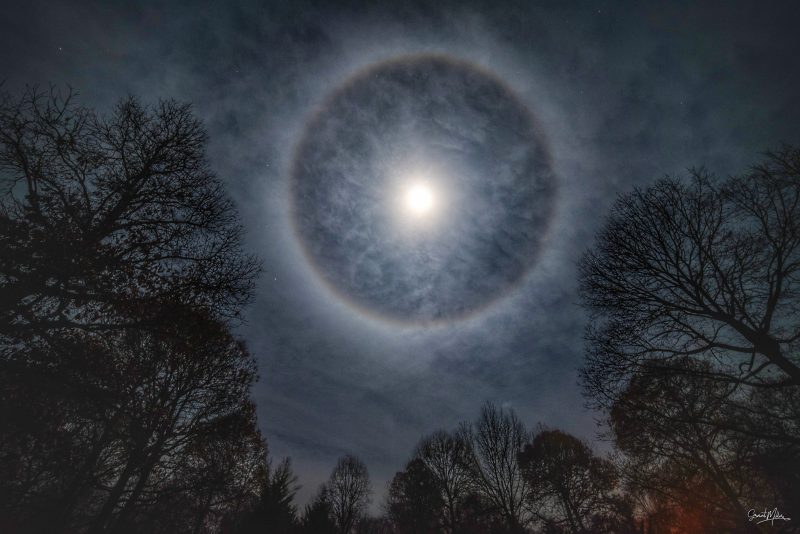 Grant Miller in Milford, Delaware caught the December 3 supermoon and wrote: “I got this shot of a halo around the moon at 1 a.m. after a friend called me waking me up, telling about this awesome looking ring around the moon that I had to go and take pictures of it. It was definitely one of the most distinct 22-degree lunar halos that I have ever seen!” 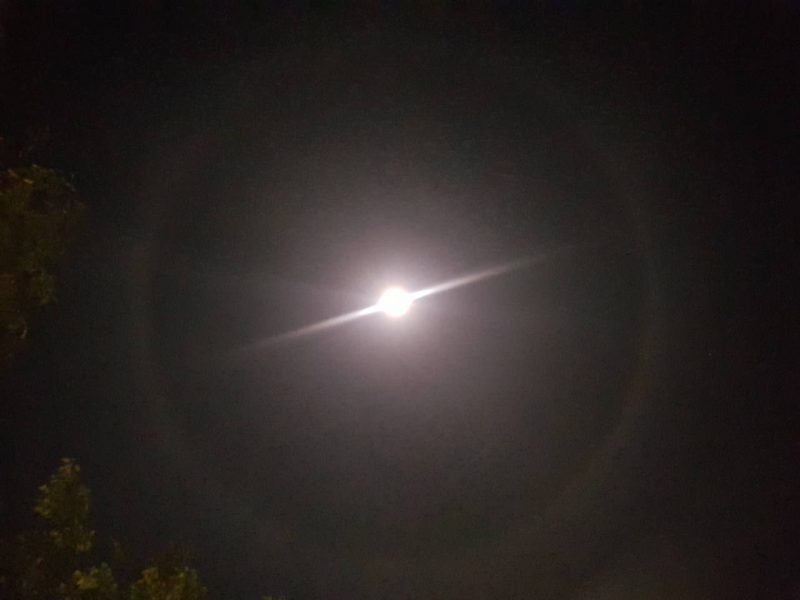 Tharaka Jayawardhana in Katunayaka, Sri Lanka also caught a 22-degree halo around the supermoon, just after midnight, local time, on the morning of December 4. 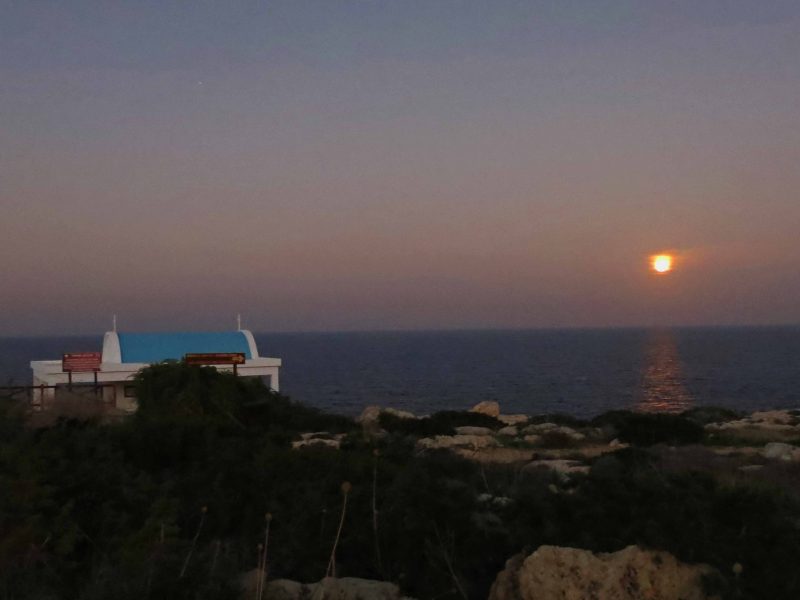 Supermoon over the Mediterranean at Ayia Napa, Cyprus, from Dawn Bailey. 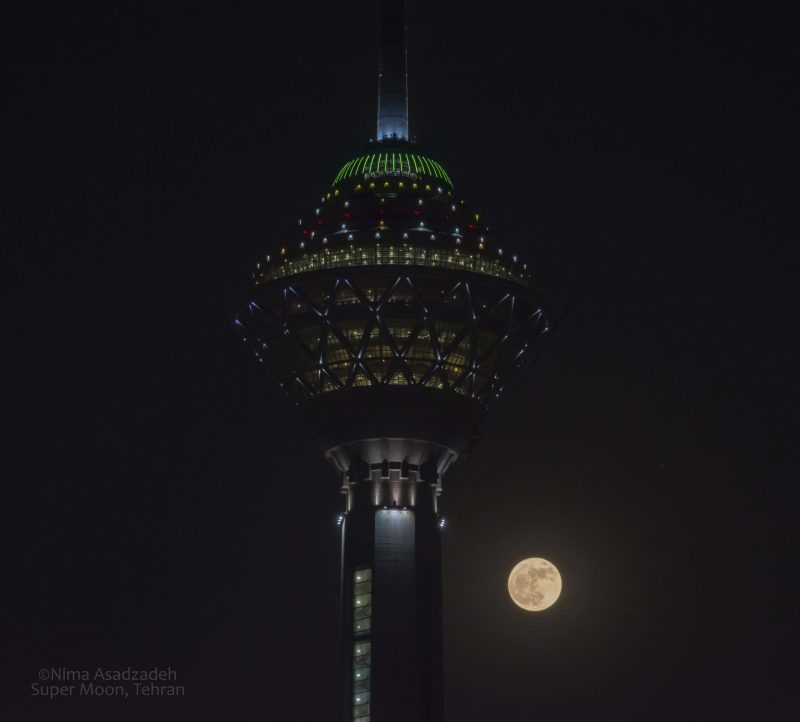 Nima Asadzadeh in Tehran, Iran wrote on December 3: “Tonight, the moon was closer to the Earth than during the last year. This phenomenon is called “Supermoon.” I just got a right location on Google map and tried to be there on time! I took this shot when the moon was rising from the tower! Hope you enjoy this shot!”

Karthik Easvur in Hyderabad, India submitted the timelapse above of the December 3 supermoon … “with many airplane light trails, looking as if they are trying to touch the supermoon.” 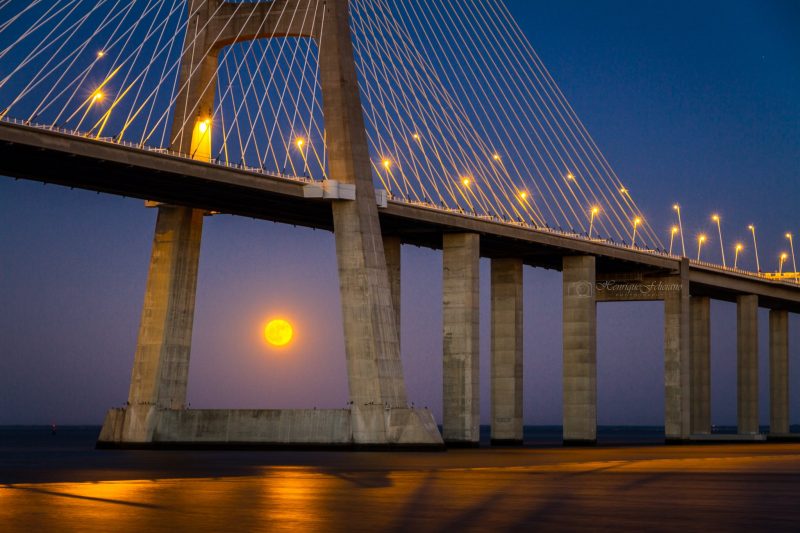 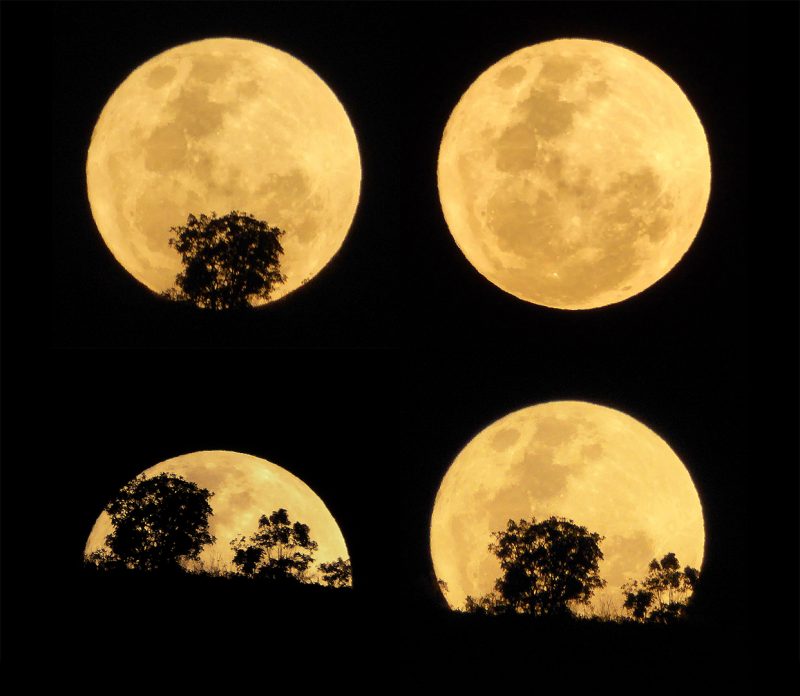 Peter Lowenstein in Mutare, Zimbabwe contributed this composite image of the rising supermoon on the evening of December 3, 2017. 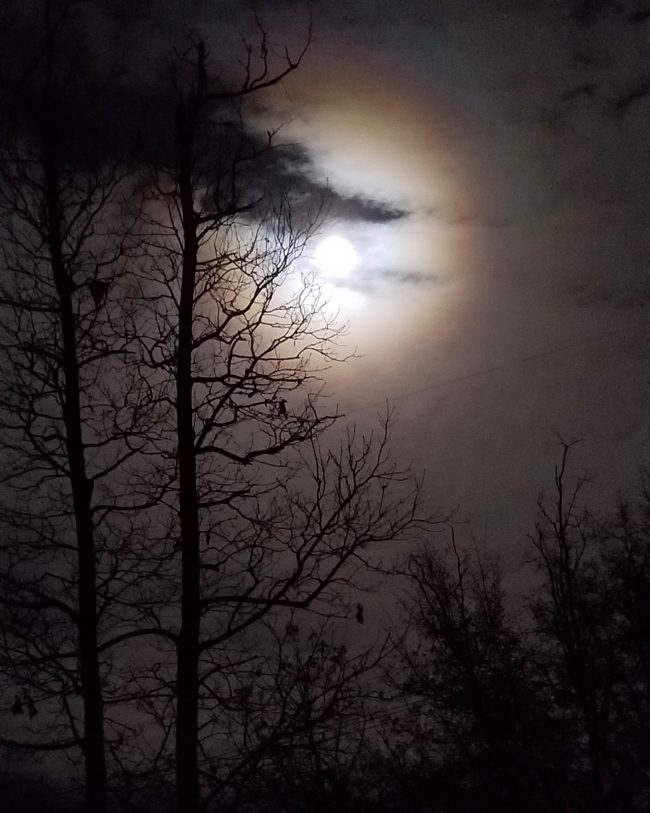 Elaine Elder in Kingston, Georgia saw a rainbow-like corona around the December 3 supermoon. 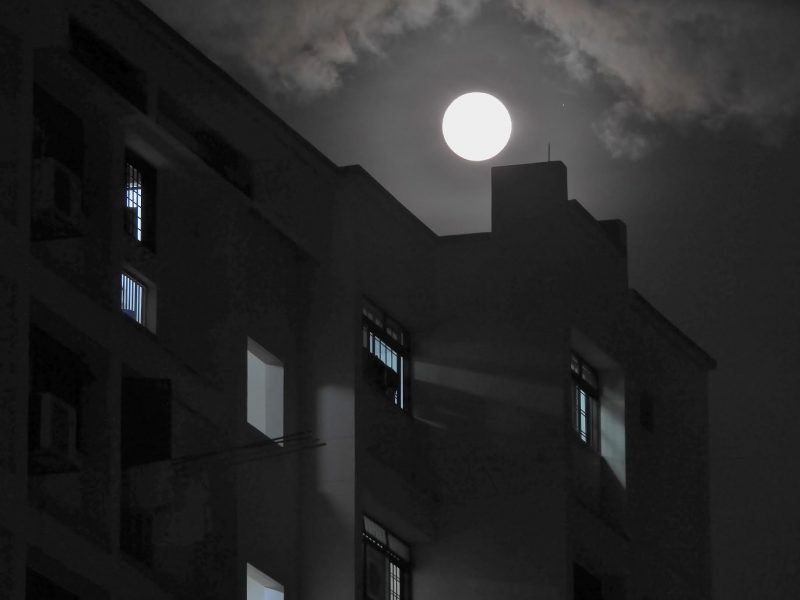 Kannan A wrote: “Was fortunate to capture some pics of the December 3 supermoon from my flat here in Singapore which was an awesome to behold!” 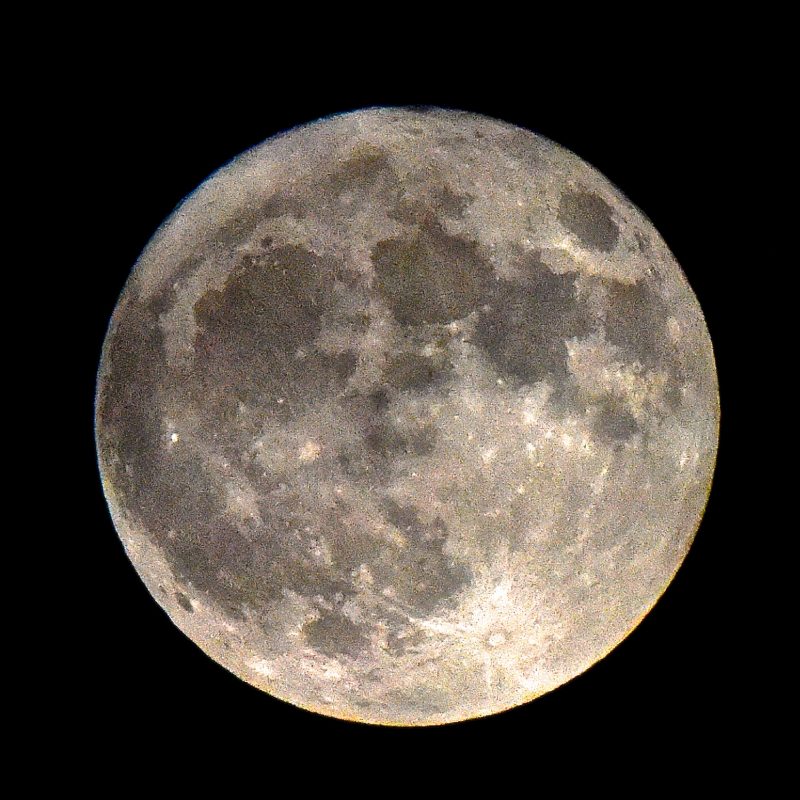 Cairbre Ó Ciardha at Cill Inion Leinin, Dublin, Ireland wrote on December 3, 2017: “Cloud cover was the problem in trying to snatch this shot.” 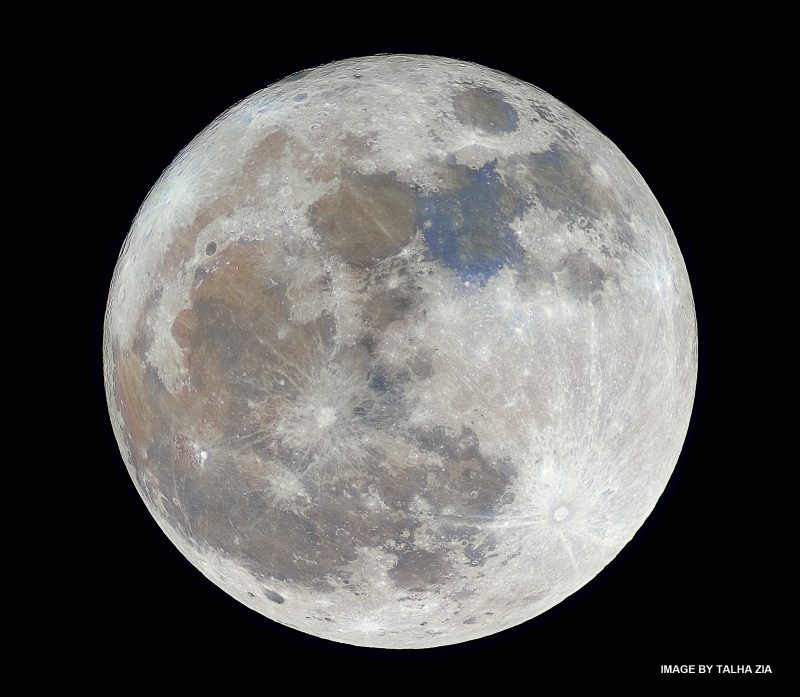 Talha Zia wrote: “This image shows the supermoon of December 3, 2017 at 99.8% illumination as captured from Karachi, Pakistan. 50 images centred and cropped in PIPP, Aligned and stacked in Registax 6 and color processing in Adobe Lightroom.” 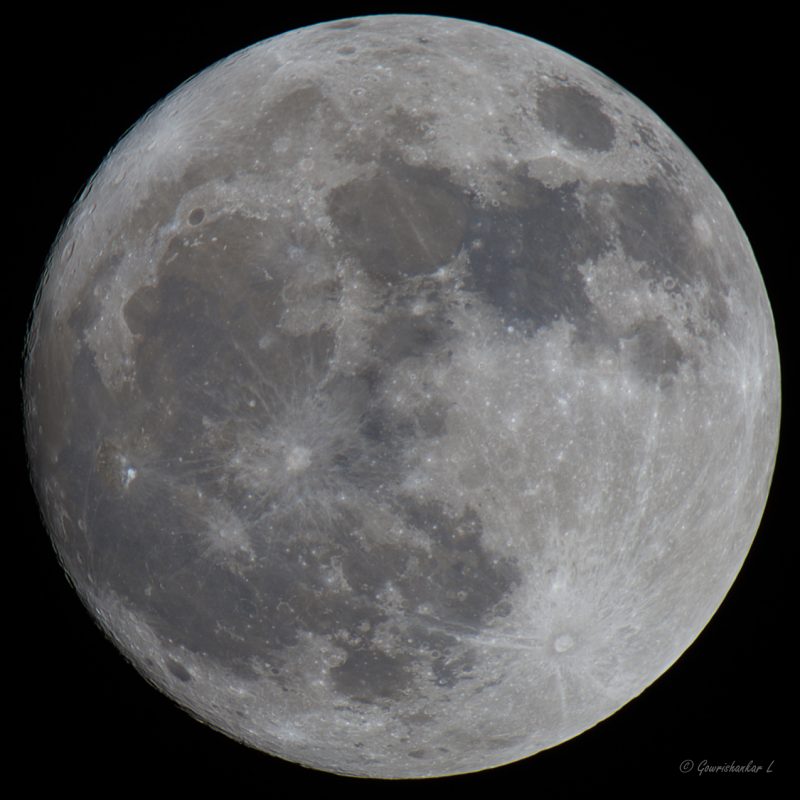 Gowrishankar Lakshminarayanan had less than ideal weather conditions for the super moonrise on December 2. He wrote; “It was a gloomy evening in New York City as heavy clouds curtained the rise of the near full supermoon. However, after 3 hours into the rise, the sky cleared up spectacularly and it was a treat to watch the moon risen almost 42 degrees up. It was challenging to capture the moonshot at this altitude, but am glad to have taken the image.” 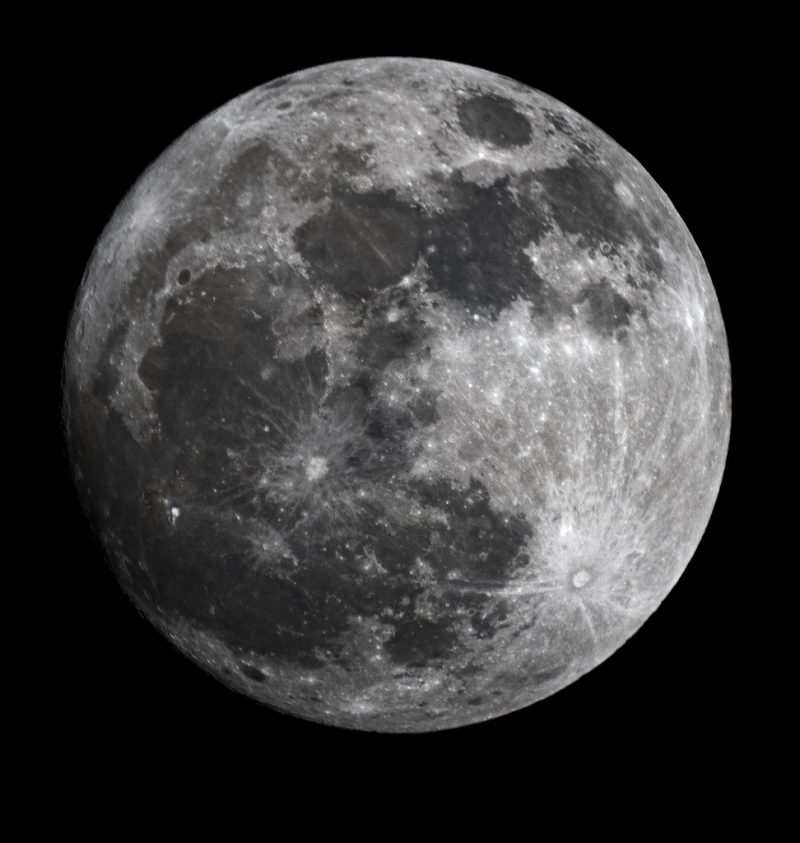 Eliot Herman said his location – Tucson, Arizona – was cloudy all day, but the clouds cleared for a while in the evening, so that he could capture the images to create this composite. He wrote: “This is a Questar telescope image acquired with a Nikon D850 @ iso 400. This is a stack of 9 images differing by 0.3 stops assembled from TIFs with Lynkeos and processed by Lucy Richardson before final Photoshop adjustments.” 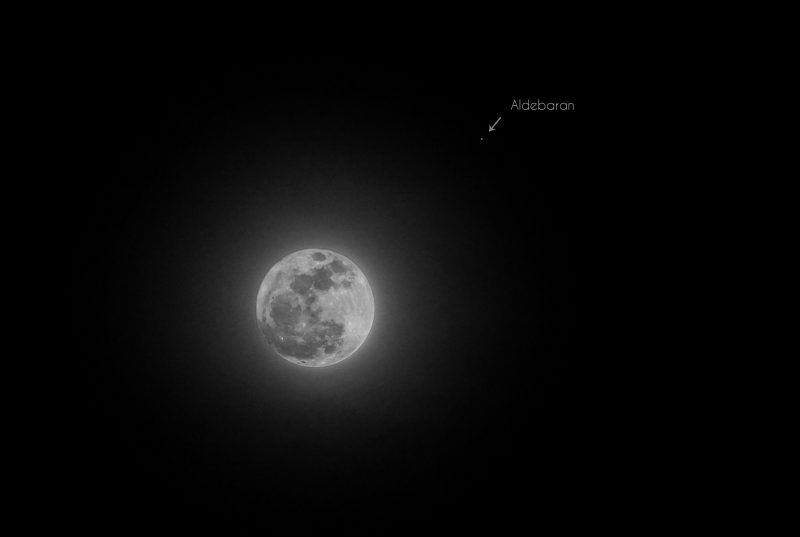 The bright star near the supermoon on December 3 was Aldebaran, the Eye of the Bull in the constellation Taurus. Karthik Easvur in Hyderabad, India used a double exposure to capture them both in this image. 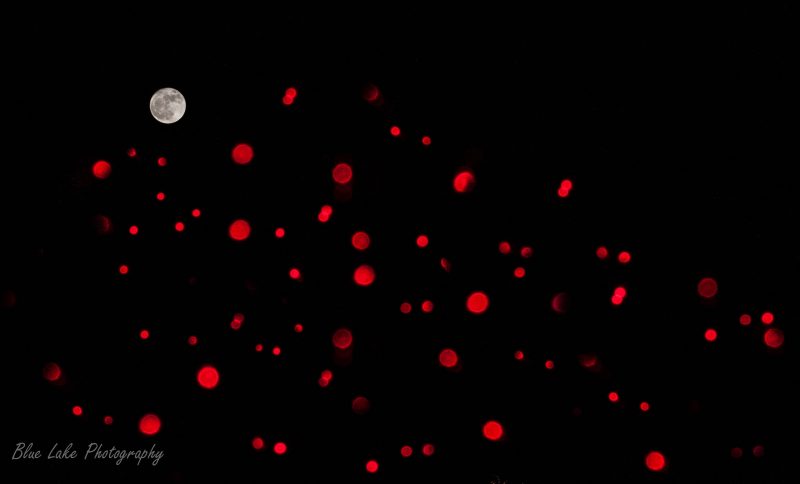 Kym Baldwin of Lahaska, Pennsylvania wrote on December 3: “The moon looked so pretty shining through the Christmas lights at Peddlers Village tonight!” 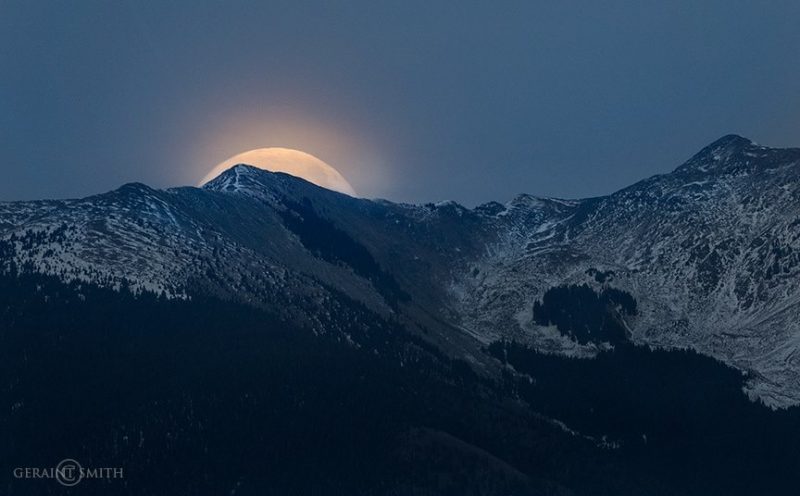 Geraint Smith caught the moon rising behind Vallecito Peak in the Sangre de Cristo mountains of northern New Mexico on December 2, the evening prior to the full supermoon.

Bottom line: Photos from around the world of the early December, 2017 supermoon.