Photos from EarthSky community of the young moon, and bright planets Venus and Jupiter on these May evenings, 2015. Watch for them in the west! 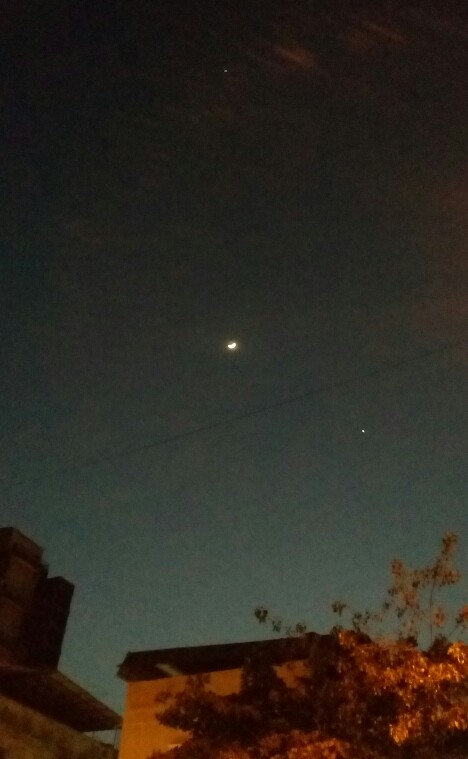 Mumbai in India is the 8th largest city in the world, with a population of over 12 million. Yet Himanshu H. Sheth was able to see Jupiter (above), the moon and Venus on Friday night, May 22, 2015. Thank you, Himanshu!

We’ve received many beautiful photos as the moon has moved up past Venus this week. It’s above Venus now in the evening sky, and, on Saturday night, will be closest to Jupiter. Enjoy these photos from EarthSky’s community. We’ll be posting more in the days ahead. 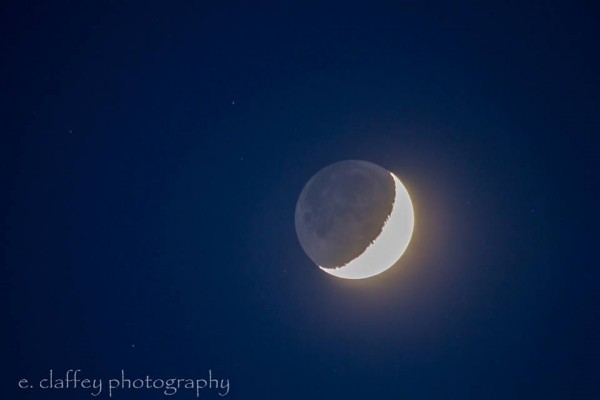 Moon on Friday night – May 22, 2015 – with earthshine, via EarthSky Facebook friend Eileen Claffey. Thanks, Eileen!

Moonset on May 22 as seen from Australia. Notice that the moon is angled differently as seen from the S. Hemisphere than, for example, in the photo above, which was taken from Massachusetts. You can notice the different orientation of the moon again, in photos further down on this page, from Zimbabwe and Brazil. This photo is by our friend Lynton Brown Landscapes. Thank you, Lynton! 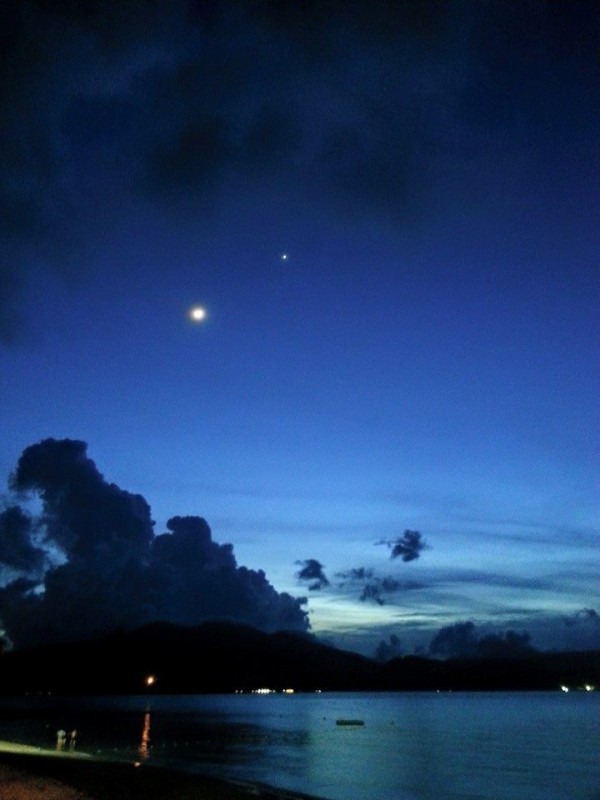 Moon and Venus on May 21, 2015 as captured in Subic, Philippines by Red’n Talastas Lagos. Thank you! 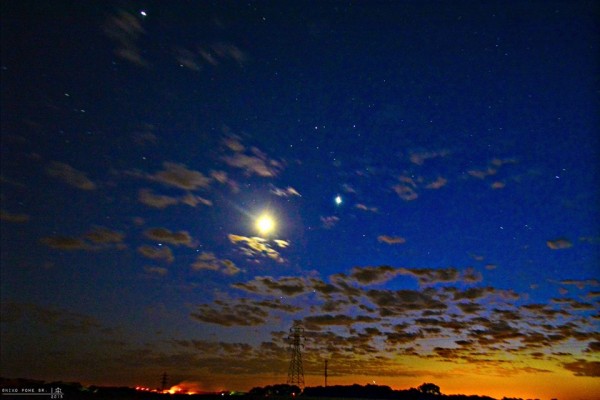 Niko Powe in Kewanee, Illinois caught the moon and Venus on May 21. Thank you, Niko! 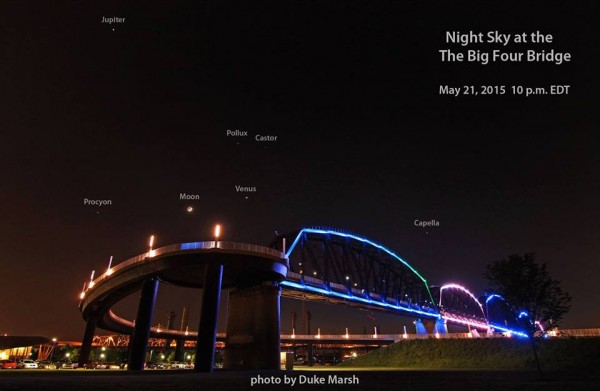 Stars and planets overhead competing with lights on the ground in Louisville, Kentucky – May 21, 2015 – from our friend Duke Marsh. Thanks, Duke! 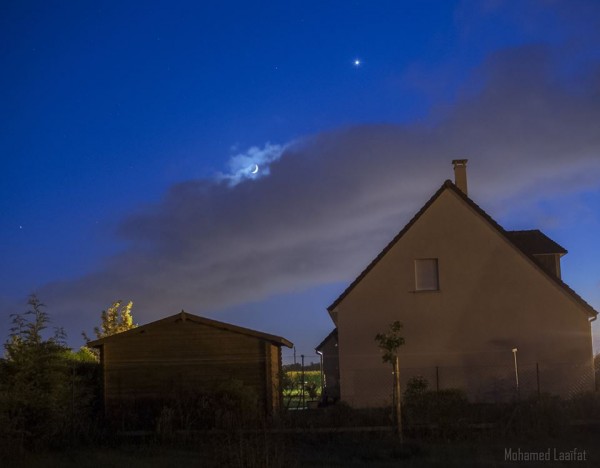 Moon and Venus on May 21 from our friend Mohamed Laaïfat Photographies?. Thank you, Mohamed. 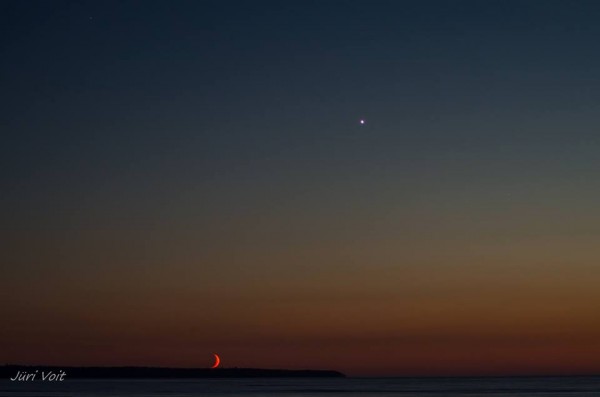 Juri Voit in Estonia caught the moon and Venus on May 21, just as the moon was setting. Thank you, Juri! 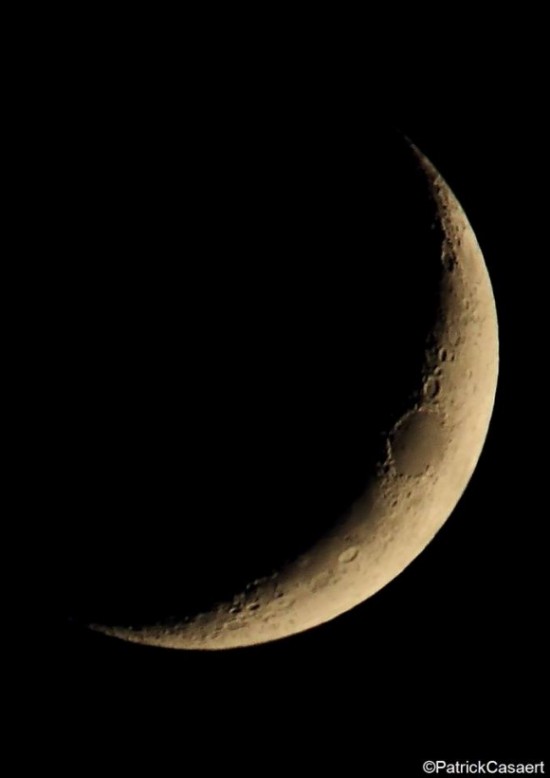 Here is a close-up of the May 21 moon, from our friend Patrick Casaert at La Lune The Moon on Facebook. Thank you, Patrick! 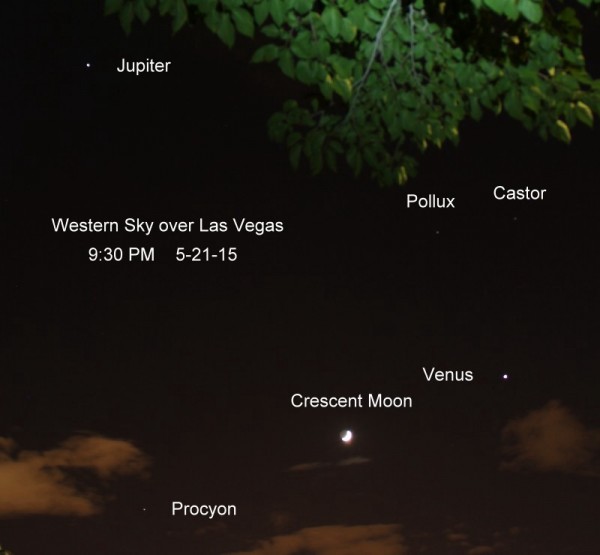 There are many bright stars in the west after sunset now, around the moon and planets. Robert Kelly caught this photo – and labeled it for us – on May 21, 2015. Thanks, Robert! 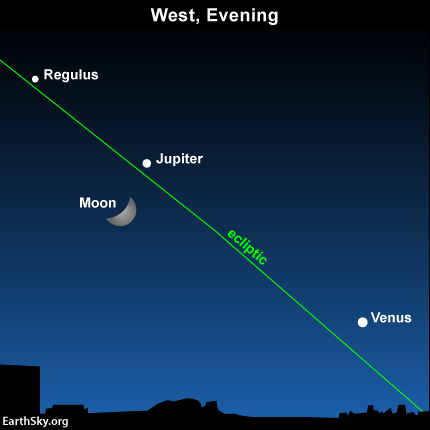 Here’s the view as it will be on Saturday night, May 23. Read more: Moon and Jupiter meet in Cancer the Crab. 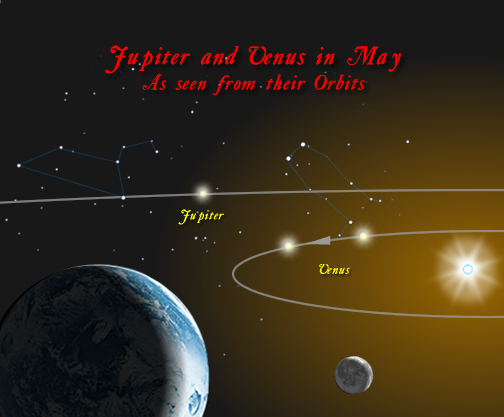 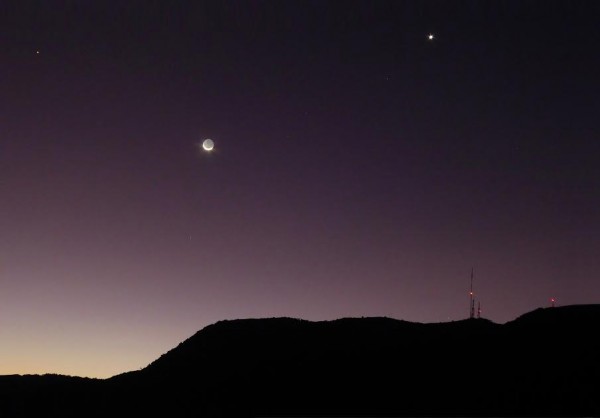 Moon and Venus as captured by Peter Lowenstein in Mutare, Zimbabwe on May 20, 2015. Notice that Venus is above and far to the left of the moon as seen from the Southern Hemisphere. 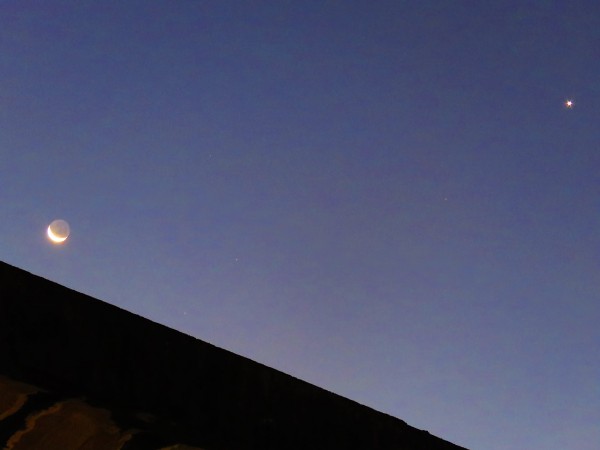 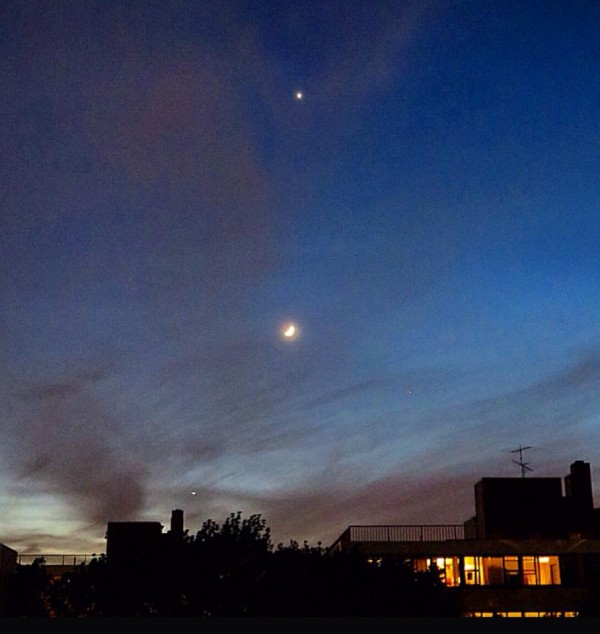 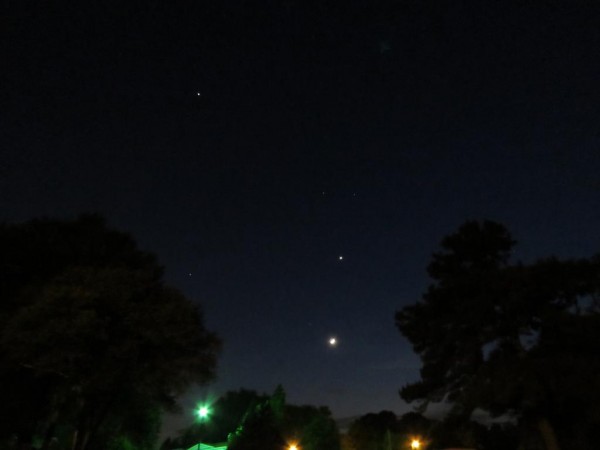 Denise Murphy captured all three – Venus, the moon and Jupiter – on May 20. Thank you, Denise. 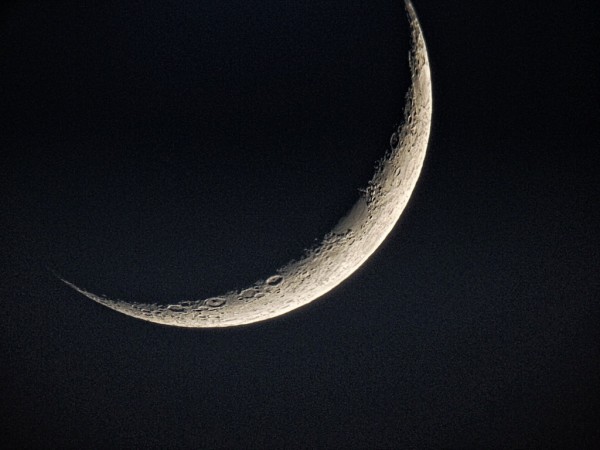 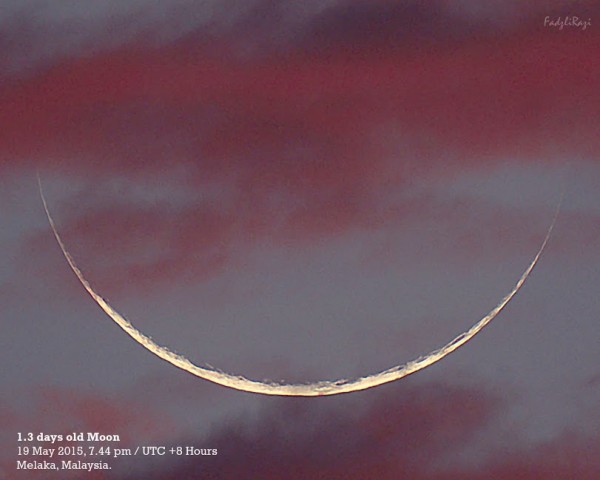 The youngest moon shot we received this month is this one, from Mohamad Fadzli in Malaysia. He caught the moon as evening fell, early in Earth’s “day” – that is, just west of the International Date Line – on May 19, 2015. Thank you, Mohamad! 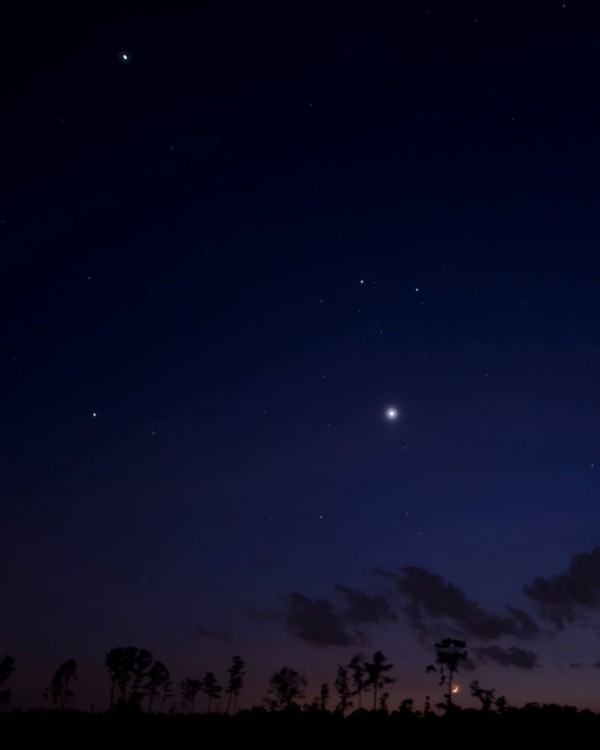 The moon on May 19, just as it was returning to the evening sky. See it low in the sky, below Venus (brightest) and Jupiter (top of photo) in this shot by Ken Christison in Northampton County, North Carolina? Thanks, Ken! 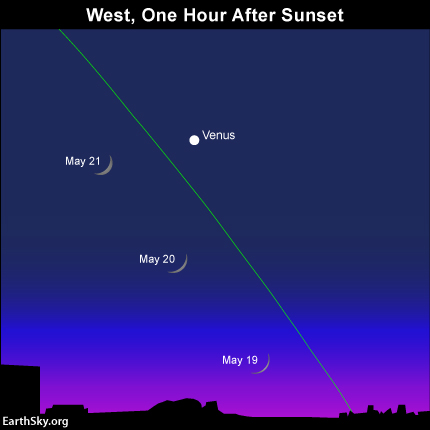 Shortly after the moon returns to the evening sky, it’ll be moving up past Venus. 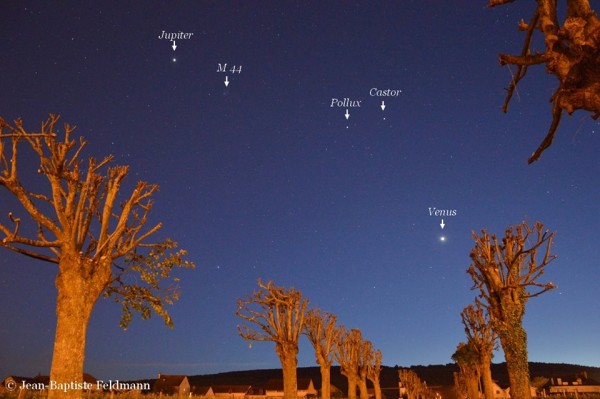 Some of the bright stars around Venus and Jupiter now. Photo by EarthSky Facebook friend Jean-Baptiste Feldmann. 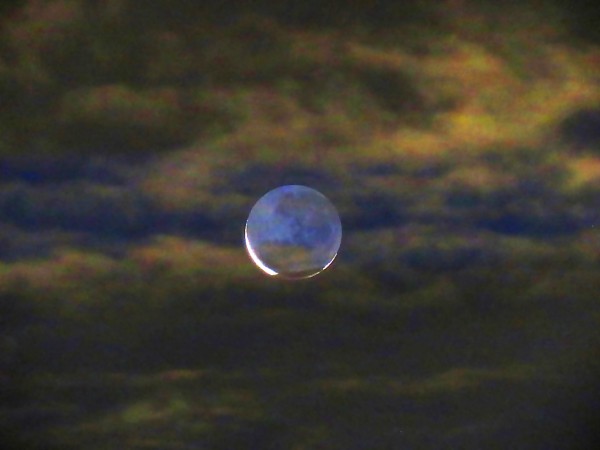 Waxing moon on May 19 from Helio C. Vital in Rio de Janeiro, Brazil. Thanks, Helio! 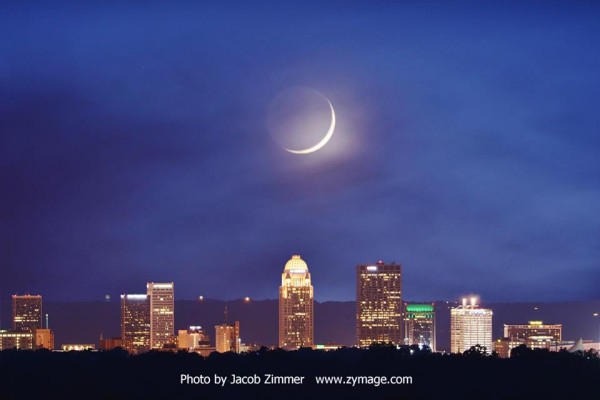 Waxing moon on May 19 from Jacob Zimmer in Louisville, Kentucky. Thanks, Jacob! 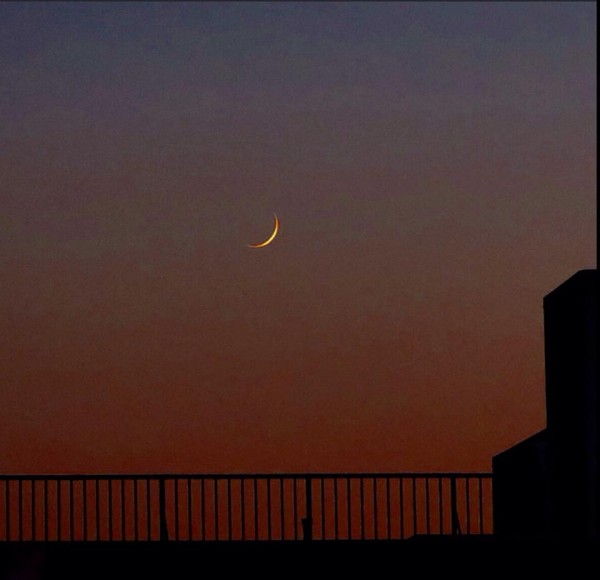