A Martian cloud reveals its secrets

Clever camerawork allowed scientists to view an elusive cloud that streams away from Mars’ volcano Arsia Mons and determine how it’s formed. 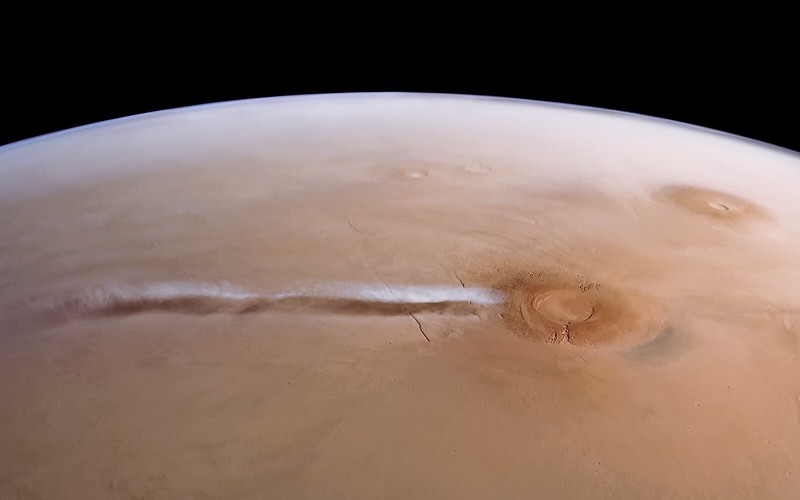 A long, thin cloud – which comes and goes with the Martian seasons – appears in this September 2018 photo from ESA’s Mars Express orbiter. This cloud has been seen to stretch 1,100 miles (1,800 km) and span some 93 miles (150 km) in width. This week, scientists said they now understand what creates the cloud. Image via Flickr/ ESA/ DLR/ FU Berlin/ J. Cowart, CC BY-SA 3.0 IGO.

Scientists announced on March 9, 2021, that they’ve unraveled the mystery of what creates a regularly occurring, long, thin cloud seen to stream away from the now-extinct Martian volcano named Arsia Mons. The cloud formation – which occurs seasonally – appears to be produced by a combination of the volcano’s height plus meteorological conditions in that part of Mars on spring and summer mornings. These conditions both cause the cloud to form, these scientists said, and explain why the cloud dissipates by midday.

Arsia Mons is the southernmost volcano of a row of three prominent volcanoes found near Mars’ equator. It rises more than 12 miles (20 km) above the Martian surface. In comparison, our earthly Mount Everest is only about 5 1/2 miles (9 km) tall, and Olympus Mons, the highest mountain on Mars and in the solar system, is 16 miles (25 km) tall. Orbiting spacecraft still see signs of ancient lava produced by this volcano millions of years ago.

A study published December 20, 2020, in the peer-reviewed journal American Geophysical Union explains how climate systems similar to those on Earth produce the cloud. Martian geography – the specific arrangement of Mars’ physical features, for example – pushes the feature to extremes.

This view of Mars’ southern highlands from September 2018 shows the cloud and Arsia Mons at left and the south polar cap at right. The wider view gives a better impression of the great length of the cloud. Image via Flickr/ ESA/ DLR/ FU Berlin/ J. Cowart, CC BY-SA 3.0 IGO.

Scientists nabbed a series of photos of the cloud by using the Mars Express Visual Monitoring Camera. The camera’s original purpose was to confirm that the mission’s Beagle 2 lander had separated from the Mars Express orbiter. The mission team recently reclassified the camera for scientific research. It’s not a new camera; the Mars Express mission launched in 2003, and thus the camera’s resolution is similar to a computer’s webcam from 2003. But this camera had other advantages that let scientists monitor the cloud’s movements. Jorge Hernández Bernal, lead author of the paper from the University of the Basque Country in Bilbao, Spain, explained:

Although it has a low spatial resolution, [the Visual Monitoring Camera] has a wide field of view – essential to see the big picture at different local times of day – and is wonderful for tracking a feature’s evolution over both a long period of time and in small time steps. As a result, we could study the whole cloud across numerous life cycles.

The images showed that the cloud formation appeared in the spring and summer months every morning before dissipating in the afternoon. The cloud follows a daily pattern of appearing around dawn at an altitude of 28 miles (45 km), then expanding for 2 1/2 hours as it’s pushed westward at immense speeds of 373 miles (600 km) an hour, until the cloud detaches from Arsia Mons and evaporates before noon in the warming air.

These observations gave scientists clues about what formed the cloud. They said they now believe it’s formed due to a process called orographic lift, or the rising of air as it flows over rising ground.

Watch the evolution of the cloud at Arsia Mons over the course of approximately 3 hours. Image via ESA. 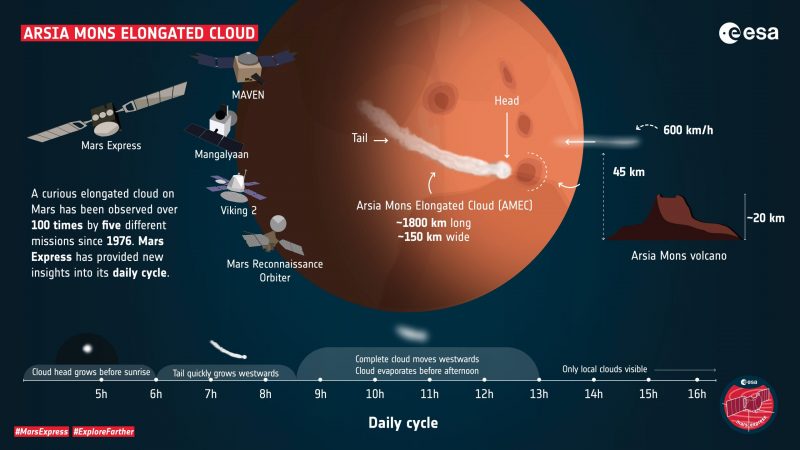 When spring arrives in southern Mars, a cloud of water ice emerges near the volcano Arsia Mons, rapidly stretching out for many hundreds of miles before disappearing hours later. A detailed long-term study reveals the daily and seasonal behavior of this cloud, using new observations from the Visual Monitoring Camera on ESA’s Mars Express, along with data from other Mars orbiters. Image via ESA.

Orographic lift occurs among earthly clouds as well. It happens when a flowing air mass meets a large obstruction, such as a mountain or volcano, and is forced upward. As the air mass rises higher in altitude, the cooler temperatures so far above the surface allow moisture to condense into clouds. This orographic cloud is the largest ever seen on Mars. Co-author Agustin Sánchez-Lavega, also of the University of the Basque Country, said:

Although orographic clouds are commonly observed on Earth, they don’t reach such enormous lengths or show such vivid dynamics. Understanding this cloud gives us the exciting opportunity to try to replicate the cloud’s formation with models that will improve our knowledge of climatic systems on both Mars and Earth.

By the way, spacecraft images of the white cloud flowing off Arsia Mons have been captured before. In the 1970s, Viking 2 caught the first images of a cloud in this region of Mars. These observations were followed up by many spacecraft over the years, including the Indian Space Research Organization’s Mars Orbiter Mission; two NASA missions, Mars Atmosphere and Volatile Evolution and Mars Reconnaissance Orbiter; and ESA’s Mars Express.

Despite all these eyes on the red planet, the constraints of earlier spacecraft didn’t allow for continuous or extended observations of this curious cloud feature until recently. In fact, most cameras orbiting Mars were in orbits that only let them observe this region of Mars in the afternoons.

And that made this morning-loving cloud an unsolved mystery, until now.

Bottom line: Clever camerawork enabled scientists to view an elusive cloud that streams away from Mars’ volcano Arsia Mons and explain how it’s formed through orographic lift (rising air over a mountain) during the morning hours.