Posted by Eleanor Imster and Deborah Byrd in Today's Image | May 9, 2019

Liz Dunster caught a photo of an airplane glory during a flight over North Carolina. Karthik Easvur caught a glory over India and provided a video! 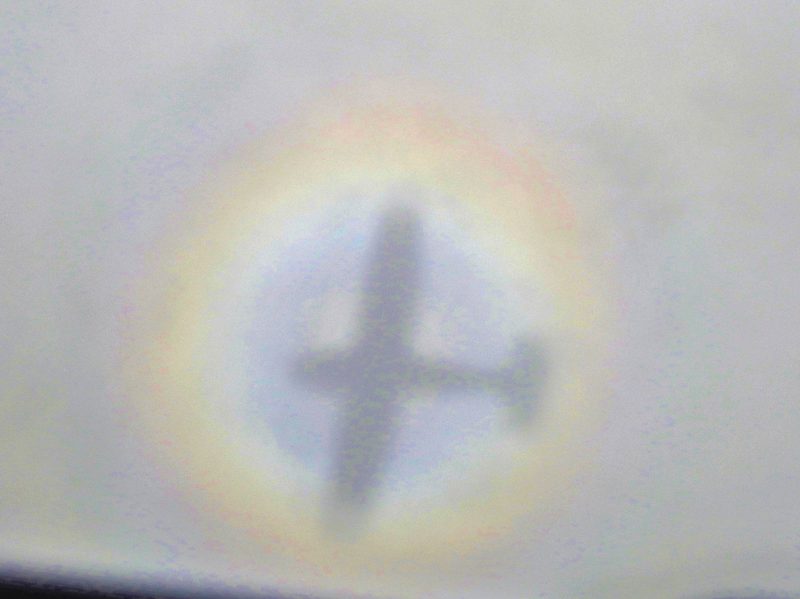 I looked out the window of the aircraft, and saw the image on the clouds below us, the shadow of the Cessna surrounded by the rainbow circle.

People traveling in airplanes often see glories. The sun has to be behind your head. You’ll see the plane’s shadow cast on a cloud, surrounded by a halo of light. Read more about glories here.

We received a second photo of a glory in recent days, this one from Karthik Easvur, who caught a glory while flying from Hyderabad to Madurai, India, on May 7, 2019. He also provided a video of what he saw, which you’ll find below.

Karthik said one interesting thing about the glory phenomenon is that you can find the position of the person on the airplane who took the photo. The point where the center of the glory is on the airplane shadow corresponds to the position of the person who took the photo. He said he took this photo sitting on the fifth-row seat from the cockpit. Thanks, Karthik!

Bottom line: Two May 2019 images of airplane glories, one over North Carolina and the other over India.