Traveling by air? Watch for a glory

People traveling in airplanes often see glories. The sun has to be behind your head. You’ll see the plane’s shadow cast on a cloud, surrounded by a halo of light. 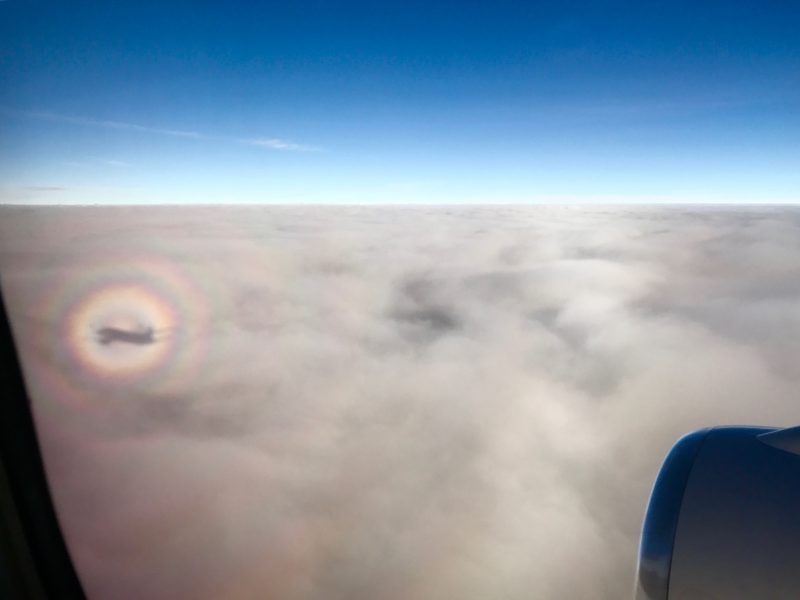 The shadow of the plane is called a brocken spectre, and the ringed light around the shadow is called a glory. March 12, 2017, photo by Gowrishankar Lakshminarayanan.

I was looking out the window of an airplane recently, and I saw the airplane’s shadow on a cloud. It looked like it was surrounded by a rainbow. Was it?

It sounds like the beautiful optical phenomenon known as the glory – also called an anti-corona or pilot’s bow.

Glories are common. They’re seen all the time by people traveling in airplanes. You need the sun to be directly behind your head. In front, you need an ordinary cloud. As you look toward the cloud, look for the shadow of the airplane. The plane’s shadow may be surrounded by a multi-colored circle of light. That’s the glory.

The plane’s shadow doesn’t have anything to do with making the glory. The glory and the shadow just happen to be located in the same direction – opposite the sun. 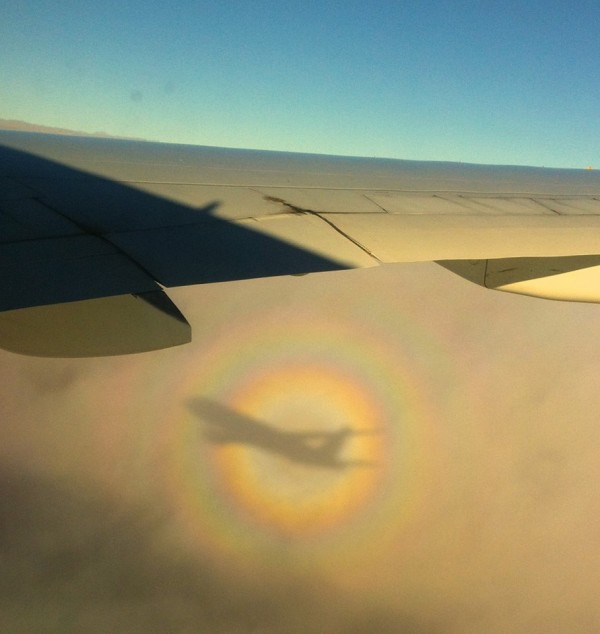 Notice that the glory consists of one or more concentric rings. Each ring is red on the outside and bluish toward the center. EarthSky Facebook friend Judy Sweeny captured this glory from an airplane window in March 2015, while flying from Addis Ababa to Dubai.

In other words, like a rainbow, a glory is centered on the antisolar point, which coincides with your head’s shadow – or the larger shadow of an airplane, if you are looking out an airplane window. This point must be opposite the sun’s position in the sky. You might see that, when the sun is high in the sky and you’re on the ground, the antisolar point always lies below your horizon.

That’s why, in order to see a glory, the clouds or fog causing it have to be located below the observer, in a straight line with the sun and the observer’s eye.

And thus glories are commonly observed from very tall buildings or from airplanes. Before the days of air travel, people spoke of glories they’d seen while mountain climbing. The same conditions – the sun behind and a cloud ahead – can also cast your shadow onto the mist. Then it’s possible to see a glory around the shadow of your own head. That type of glory is called a brocken spectre.

The glory is round, like the halo you sometimes see around the sun or moon, and it comes in muted rainbow colors. 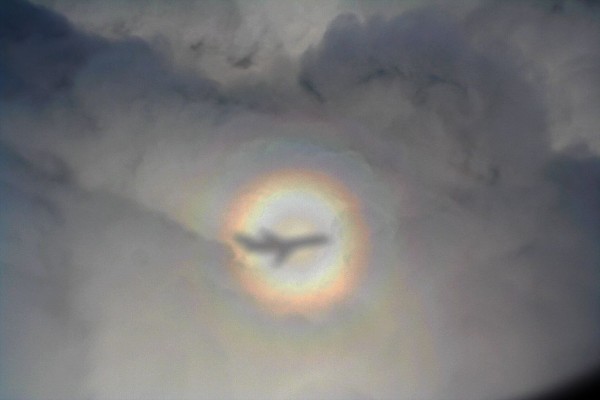 A glory is made of sunlight scattered back toward you. It’s much smaller than a rainbow, and it’s made by light scattered from the droplets of a cloud, instead of falling raindrops. Image via Wikipedia. 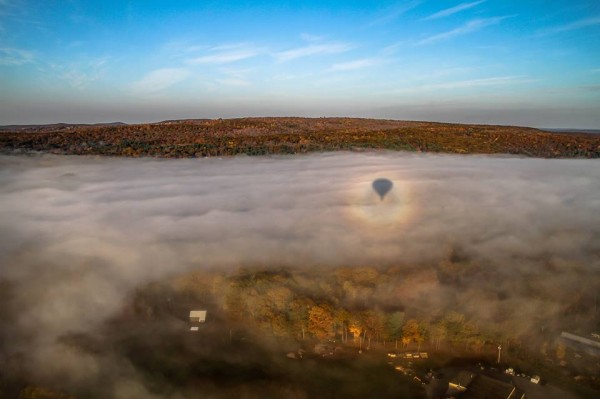 View larger. | View from a hot air balloon captured in October 2013 by EarthSky Facebook friend Eileen Claffey in Brookline, Massachusetts. The shadow of the balloon doesn’t have anything to do with making the glory. It’s just located in the same direction as the glory – opposite your head from the sun. The halo of light around it is the glory. Thank you, Eileen!

Bottom line: People traveling in airplanes often see glories. The sun has to be behind your head. You’ll see the plane’s shadow cast on a cloud, surrounded by a halo of light.