Where is Proxima Centauri?

You probably know the very nearest star to our sun is Proxima in the triple star system we call Alpha Centauri. Guy Ottewell shows you where in space Proxima is. 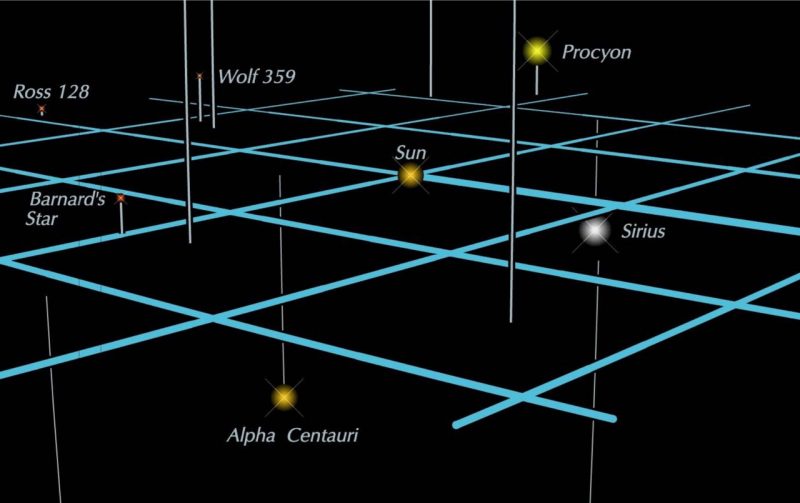 View larger. | Stars within 12 light-years of our sun. The lines on the grid are 4 light-years apart. Proxima is part of the triple star system we see as the single star Alpha Centauri. Diagram published originally in Guy Ottewell’s beloved Astronomical Companion. Do click in to view larger; Guy commented, “It’s quite vivid when it fills the screen.”

The diagram above shows you where Alpha Centauri is with respect to other nearby stars. Included are stars within 12 light-years from the sun. The glows of light representing the stars are millions of times larger than the stars themselves, which would be microscopically small on this scale.

The grid serves to show the equatorial plane, and also the scale, the lines being 4 light-years apart. The slightly thicker line is the vernal equinox direction (the Earth-sun direction around every March 20).

Imaginary stalks from the plane to the stars show how far north or south they are. I’ve cropped the picture so that some of the stars are off the top or bottom, but they are obscure stars you may not have heard of, with designations such as Lalande 21185, Luyten 726-8, DX Cancri. Most stars, including most of those near to us, are smaller than our sun: red dwarfs.

The exceptions near to us are Sirius, Procyon, and Alpha Centauri.

Alpha Centauri is the third-brightest star (that is, as seen from our place in space, and not counting the sun). Like the first- and second-brightest – Sirius and Canopus – it is a southern star. Indeed it’s much farther south than either of those, which is why it has no traditional name in our culture (except a rather faux-traditional one, Rigil Kentaurus).

The space diagram shows it at a steep southward angle from the sun. This angle (its declination -61°) means it doesn’t peep above the horizon until you go down to the latitude of northern Florida; to see it properly you might go south of Earth’s equator.

Then you would see in your telescope that it is a double star – one of the widest and easiest to “split.” Here is part of my diagram of the pair with which I used to fill a space in Astronomical Calendar 2016: 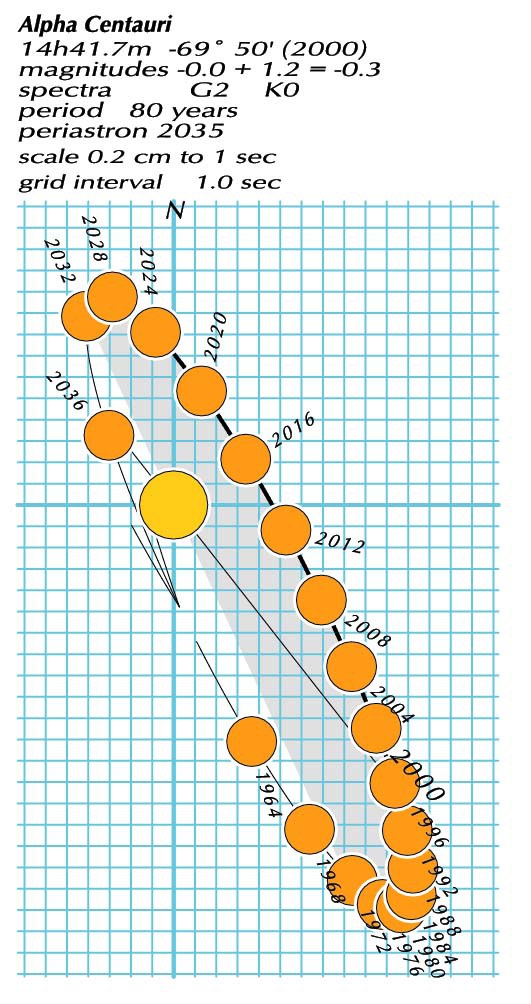 The double star of Alpha Centauri. Astronomers call them Alpha Centauri A and B. Image via Astronomical Calendar 2016 by Guy Ottewell.

Again, the symbols for the stars are vastly larger than the bodies of the stars would be. It isn’t really that the B star revolves around the A one: they both revolve around their common center of gravity. You can see that this year, 2016, is the year when B appears closest to A, though in the true (untilted) orbit it will reach periastron in 2035. The blue lines are one second of arc apart – that’s the apparent size of a tennis ball 10 miles away.

Alpha Centauri A is a star much like the sun, slightly larger and of about the same 4.6-billion-year age or slightly older; B is slightly smaller and cooler. In their elliptical orbits around their common center of gravity, they range from about 11 astronomical units (sun-Earth distances) apart when closest, to 36 when farthest apart – in other words, from something like the sun-Saturn to something like the sun-Pluto distance.

And the distance of this star system from us is only 4.4 light-years: nearer than all other stars … except for one, Proxima, discovered in 1915 (by Robert Jones in South Africa).

Proxima is one of those numerous dwarfs whose surfaces are reddish, meaning cooler and dimmer. Only about 1/7 as wide as the sun, and at a magnitude (brightness) of 11, it is about 100 times too dim to be seen with the unaided eye. Proxima is more than 2 degrees away from the Alpha Centauri pair; on observatory photographs, there are thousands of background stars in between. Yet studies of it found that it is only 4.24 light-years away from us, closer than the other two stars in the Alpha Centauri system.

Hence it is dubbed Proxima Centauri, with the word Proxima having the same root as the word proximity, meaning near.

The nearest stars not only have the largest parallax (apparent angular shift as we go around the sun) but are liable to have large proper motion (travel across the starry background from year to year). Proxima is found to be still coming gradually toward us; it will be nearest, at only about 3 light-years, about 27,000 years into the future. And it is probably, though not quite certainly, gravitationally bound to the Alpha Centauri pair 0.2 light-year away from it, in an enormous, slow orbit of something like 500,000 years. So it can be called Alpha Centauri C.

Yes, these are humiliating numbers, and I hesitate to crush you further with the reminder that a light-year is nearly 6,000,000,000,000 miles, and the distance across the Milky Way galaxy is something like 30,000 times greater than the distance to these our nearest neighbors in it.

Thus – even if there is a Proximan with a telephone, and one day you receive a call from her asking, “What is your name, how many legs do you have, and how many sexes are there in your world?” – it will be more than four years before she receives your reply and more than eight before you know what she thinks of it.

Bottom line: Diagram and explanation from astronomer Guy Ottewell, showing the location in space of the Alpha Centauri system and, in particular, the star Proxima Centauri, the nearest star to Earth.