Asteroid 1998 QE2 will pass about 15 times the moon’s distance. Several organizations are looking at it, and you can join the fun.

Today – May 31, 2013 – a 1.7-mile-long asteroid called 1998 QE2 will sail safely past Earth at a distance of about 3.6 million miles (5.8 million kilometers). That’s about 15 times the moon’s distance. This object is not a hazardous asteroid, and the May 31 asteroid flyby is safe. Closest approach happens today at 1:59 p.m. Pacific (4:59 p.m. Eastern / 20:59 UTC). This is the closest approach the asteroid will make to Earth for at least the next two centuries. NASA is already watching with its Goldstone radar telescope and has invited the public to online and television events that began yesterday (May 30) and continue today. Experts are discussing NASA’s asteroid initiative and showing real-time images of the May 31 Earth flyby of asteroid 1998 QE2. Plus the Slooh Space Camera will try to capture the asteroid as it sweeps past. Details on how you can participate below. All activities listed for May 31, 2013.

Approaching asteroid 1998 QE2 has its own moon!

“We the Geeks” at 2-3 p.m. EDT / 1800-1900 UTC. NASA Deputy Administrator Lori Garver, former astronaut Ed Lu, and Bill Nye the Science Guy will discuss all things asteroid in a White House “We the Geeks” Google+ Hangout. The hangout can be viewed at the White House website, here: https://plus.google.com/+whitehouse/posts

Slooh at 1:30 p.m. PDT / 4:30 p.m. EDT / 2030 UTC. Slooh Space Camera will cover 1998 QE2’s closest approach from its observatories in the Canary Islands, off the coast of west Africa. Viewers can watch live on their PC/Mac or by downloading a free Slooh iPad app in the iTunes store and touching the broadcast icon. Click here for Slooh’s schedule and more details. 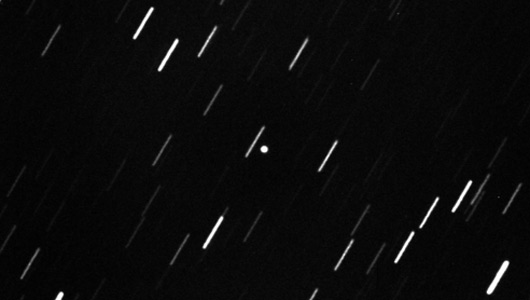 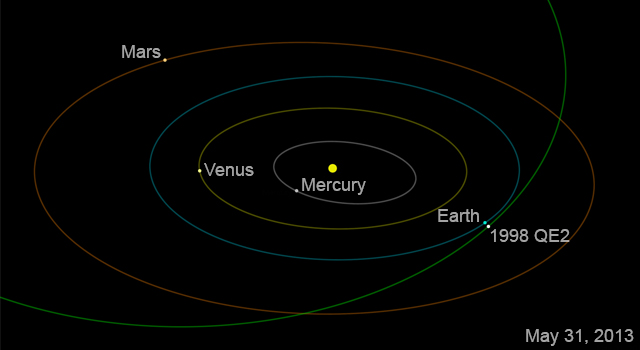 As NASA peered at the asteroid via radar this week, it discovered that 1998 QE2 does not travel alone in space. Instead, this object has a moon. See the video below, and watch as the moon moves in orbit around the asteroid. An asteroid with a moon is said to be a binary asteroid. Read more about 1998 QE2’s moon here.

NASA has plans to launch a robotic probe to one of the most potentially hazardous of the known Near Earth Objects (NEOs). NASA says:

The OSIRIS-REx mission to asteroid (101955) Bennu will be a pathfinder for future spacecraft designed to perform reconnaissance on any newly-discovered threatening objects. Aside from monitoring potential threats, the study of asteroids and comets enables a valuable opportunity to learn more about the origins of our solar system, the source of water on Earth, and even the origin of organic molecules that lead to the development of life.

In addition, earlier this year, NASA announced that is is developing a first-ever mission to identify, capture and relocate an asteroid for human exploration. This mission would mark an unprecedented technological achievement that raises the bar of what humans can do in space.

By the way, 1998 QE2 – which is believed to be about 1.7 miles (2.7 kilometers) or nine Queen Elizabeth 2 ship-lengths in size – is not named for that 12-decked, transatlantic-crossing flagship for the Cunard Line, NASA says. Instead, the name is assigned by the NASA-supported Minor Planet Center in Cambridge, Mass., which gives each newly discovered asteroid a provisional designation starting with the year of first detection, along with an alphanumeric code indicating the half-month it was discovered, and the sequence within that half-month.