Approaching asteroid 1998 QE2 has its own moon

The 70-meter Deep Space Network antenna at Goldstone, California picked up the moon for 1998 QE2 during the night of May 29-30.

Approaching asteroid 1998 QE2 has a moon. The 70-meter Deep Space Network antenna at Goldstone, California picked up the moon during the night of May 29-30, as 1998 QE2 hurtled through space on its way to a nearest approach to Earth on May 31. The asteroid will come about 3.6 million miles from Earth – about 5.8 million kilometers – or about 15 times the moon’s distance. Astronomers discovered the moon when the asteroid was less than two days out from closest approach at about 3.7 million miles (6 million kilometers).

Astronomers believe the little moon may be about 0.37 miles wide (about 600 meters). The asteroid itself is approximately 1.7 miles wide (2.7 kilometers) and has a rotation period of less than four hours.

Watch or participate as huge asteroid sails past Earth 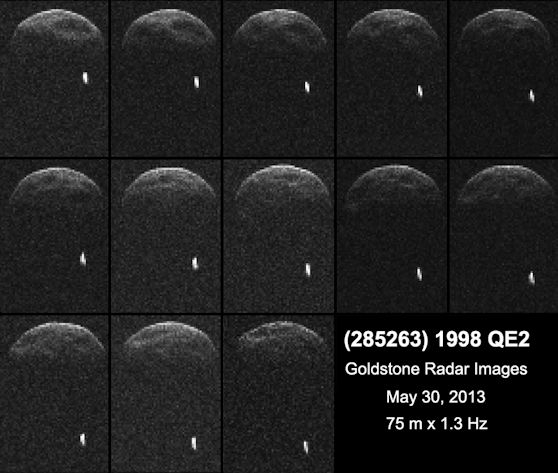 First radar images of asteroid 1998 QE2 were obtained when the asteroid was about 3.75 million miles (6 million kilometers) from Earth. The radar collage covers a little bit more than two hours. In other words, this collage shows the moon orbiting around the asteroid. Image credit: NASA/JPL-Caltech/GSSR

These findings show that 1998 QE2 is a binary asteroid. In the near-Earth population, about 16 percent of asteroids that are about 200 meters or larger are binary or triple systems Also revealed in the radar imagery of 1998 QE2 are several dark surface features that suggest large concavities.

The closest approach of the asteroid occurs on May 31 at 1:59 p.m. Pacific (4:59 p.m. Eastern / 20:59 UTC), when the asteroid will get no closer than about 5.8 million kilometers, or about 15 times the distance between Earth and the moon. This is the closest approach the asteroid will make to Earth for at least the next two centuries. Asteroid 1998 QE2 was discovered on Aug. 19, 1998, by the Massachusetts Institute of Technology Lincoln Near Earth Asteroid Research (LINEAR) program near Socorro, N.M.

The resolution of these initial images of 1998 QE2 is approximately 75 meters per pixel. Resolution is expected to increase in the coming days as more data become available. Between May 30 and June 9, radar astronomers using the Deep Space Network antenna at Goldstone, Calif., and the Arecibo Observatory in Puerto Rico, will perform an extensive campaign of observations on asteroid 1998 QE2. The two telescopes have complementary imaging capabilities that will enable astronomers to learn as much as possible about the asteroid during its brief visit near Earth.