“Few missions can ever match the achievements of the Voyager spacecraft during their four decades of exploration.” 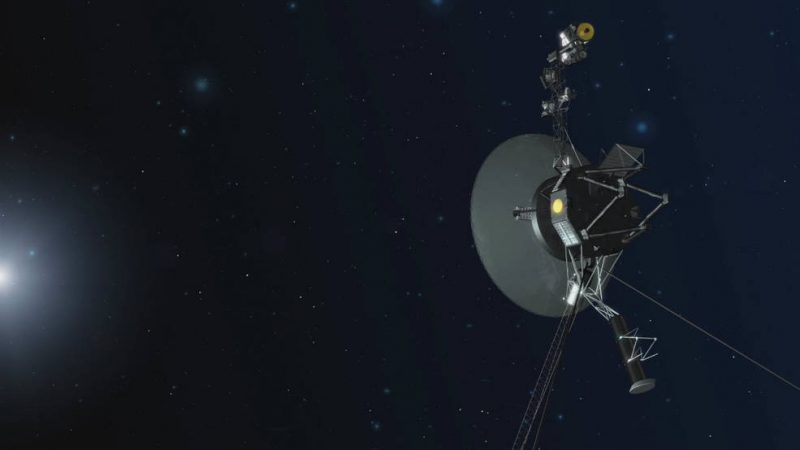 An artist concept depicting one of the twin Voyager spacecraft. Humanity’s farthest and longest-lived spacecraft are celebrating 40 years in August and September 2017. Image via NASA.

Humanity’s farthest and longest-lived spacecraft, Voyager 1 and 2, achieve 40 years of operation and exploration this August and September. Despite their vast distance, they continue to communicate with NASA daily, still probing the final frontier.

Their story has not only impacted generations of current and future scientists and engineers, but also Earth’s culture, including film, art and music. Each spacecraft carries a Golden Record of Earth sounds, pictures and messages. Since the spacecraft could last billions of years, these circular time capsules could one day be the only traces of human civilization. 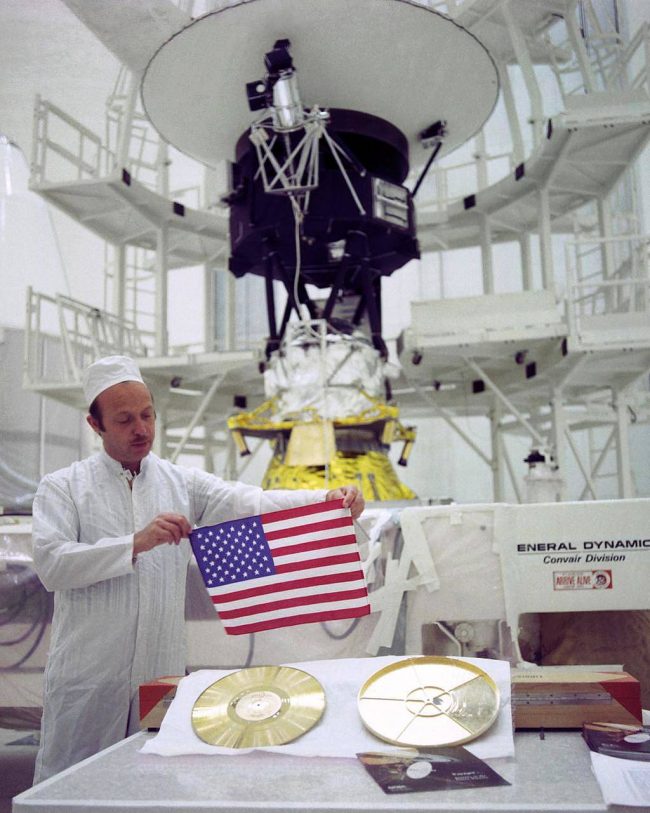 This picture shows John Casani, Voyager project manager in 1977, holding a small flag that was folded and sewed into the thermal blankets of the Voyager spacecraft before they launched. Below him lie the Golden Record (left) and its cover (right). In the background stands Voyager 2 before it headed to the launch pad. The picture was taken at Cape Canaveral, Fla., on August 4, 1977. Image via NASA.

I believe that few missions can ever match the achievements of the Voyager spacecraft during their four decades of exploration. They have educated us to the unknown wonders of the universe and truly inspired humanity to continue to explore our solar system and beyond.

The Voyagers have set numerous records in their unparalleled journeys. In 2012, Voyager 1, which launched on September 5, 1977, became the only spacecraft to have entered interstellar space. Voyager 2, launched on August 20, 1977, is the only spacecraft to have flown by all four outer planets – Jupiter, Saturn, Uranus and Neptune. Their numerous planetary encounters include discovering the first active volcanoes beyond Earth, on Jupiter’s moon Io; hints of a subsurface ocean on Jupiter’s moon Europa; the most Earth-like atmosphere in the solar system, on Saturn’s moon Titan; the jumbled-up, icy moon Miranda at Uranus; and icy-cold geysers on Neptune’s moon Triton.

Though the spacecraft have left the planets far behind – and neither will come remotely close to another star for 40,000 years – the two probes still send back observations about conditions where our sun’s influence diminishes and interstellar space begins. 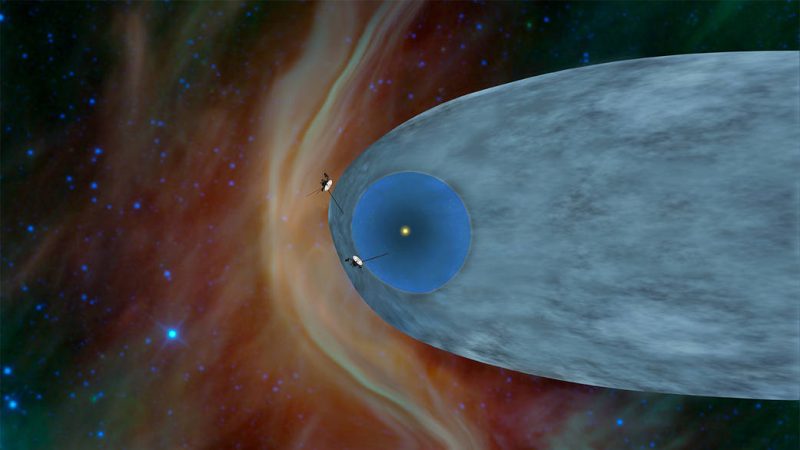 Voyager 1, now almost 13 billion miles from Earth, travels through interstellar space northward out of the plane of the planets. The probe has informed researchers that cosmic rays, atomic nuclei accelerated to nearly the speed of light, are as much as four times more abundant in interstellar space than in the vicinity of Earth. This means the heliosphere, the bubble-like volume containing our solar system’s planets and solar wind, effectively acts as a radiation shield for the planets. Voyager 1 also hinted that the magnetic field of the local interstellar medium is wrapped around the heliosphere.

Voyager 2, now almost 11 billion miles from Earth, travels south and is expected to enter interstellar space in the next few years. The different locations of the two Voyagers allow scientists to compare right now two regions of space where the heliosphere interacts with the surrounding interstellar medium using instruments that measure charged particles, magnetic fields, low-frequency radio waves and solar wind plasma. Once Voyager 2 crosses into the interstellar medium, they will also be able to sample the medium from two different locations simultaneously.

None of us knew, when we launched 40 years ago, that anything would still be working, and continuing on this pioneering journey. The most exciting thing they find in the next five years is likely to be something that we didn’t know was out there to be discovered.

The twin Voyagers have been cosmic overachievers, thanks to the foresight of mission designers. By preparing for the radiation environment at Jupiter, the harshest of all planets in our solar system, the spacecraft were well equipped for their subsequent journeys. Both Voyagers are equipped with long-lasting power supplies, as well as redundant systems that allow the spacecraft to switch to backup systems autonomously when necessary. Each Voyager carries three radioisotope thermoelectric generators, devices that use the heat energy generated from the decay of plutonium-238 – only half of it will be gone after 88 years.

Space is almost empty, so the Voyagers are not at a significant level of risk of bombardment by large objects. However, Voyager 1’s interstellar space environment is not a complete void. It’s filled with clouds of dilute material remaining from stars that exploded as supernovae millions of years ago. This material doesn’t pose a danger to the spacecraft, but is a key part of the environment that the Voyager mission is helping scientists study and characterize.

Because the Voyagers’ power decreases by four watts per year, engineers are learning how to operate the spacecraft under ever-tighter power constraints. And to maximize the Voyagers’ lifespans, they also have to consult documents written decade’s earlier describing commands and software, in addition to the expertise of former Voyager engineers.

The technology is many generations old, and it takes someone with 1970s design experience to understand how the spacecraft operate and what updates can be made to permit them to continue operating today and into the future.

Team members estimate they will have to turn off the last science instrument by 2030. However, even after the spacecraft go silent, they’ll continue on their trajectories at their present speed of more than 30,000 mph (48,280 kilometers per hour), completing an orbit within the Milky Way every 225 million years.

Bottom line: Celebrating the 40th anniversary of the Voyager mission.