Volcanism created a 2nd atmosphere on this Earth-sized exoplanet

For the first time, scientists have found evidence for a secondary atmosphere on an exoplanet, created by volcanism beneath the surface. The planet, GJ 1132 b, is thought to have once been a sub-Neptune, but now is a rocky world the size of Earth. 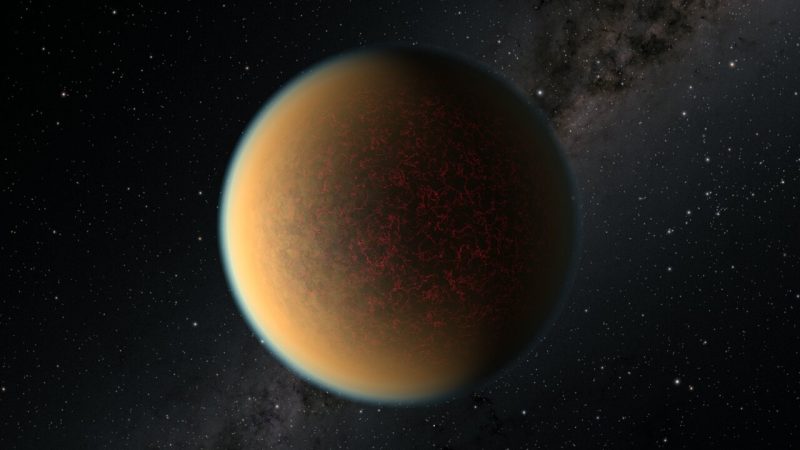 Artist’s concept of exoplanet GJ 1132 b. For the first time, scientists using the Hubble Space Telescope have found evidence of volcanic activity reforming the atmosphere on this rocky planet, which has a similar density, size, and age as that of Earth. New observations from Hubble show evidence of a second atmosphere that has replaced the planet’s first primordial atmosphere. Image via NASA/ ESA/ R. Hurt (IPAC/ Caltech)/ Hubblesite.

Scientists said on March 11, 2021, that – for the first time – they’ve detected a secondary atmosphere on an exoplanet orbiting a distant star. They used the Hubble Space Telescope to examine the exoplanet called GJ 1132 b, an Earth-sized rocky world orbiting a red dwarf star 41 light-years away. Earlier research revealed this distant planet in 2015. The new study suggests that, after the planet lost its original atmosphere due to intense radiation from its star, the planet later gained a new atmosphere through volcanism.

Astronomical theories suggests that some exoplanets should be able to develop secondary atmospheres, but this is the first confirmed detection.

The peer-reviewed results will be published in an upcoming issue of The Astronomical Journal, but a preprint version is available now on arXiv.

GJ 1132 b is rocky and similar in size and age to Earth. But its current atmosphere is quite different from Earth’s. This exoplanet appears to have an atmosphere composed of hydrogen, methane and hydrogen cyanide, along with an aerosol haze. The rocky world we see now is thought to be the leftover core of a planet that once was what astronomers call a sub-Neptune; that is, it once was several times larger than Earth. Worlds categorized by earthly astronomers as sub-Neptunes are now thought to be fairly common, but if one is too close to its star, it risks having its atmosphere destroyed by intense radiation from the star, something that’s especially common among red dwarf stars.

Thus the thick primordial atmosphere of hydrogen and helium once surrounding GJ 1132 b is thought to have been stripped away. 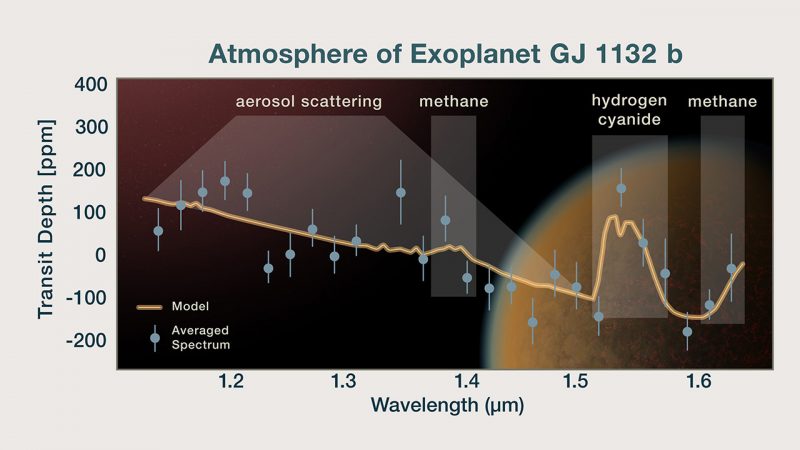 The atmosphere of GJ 1132 b, as observed by the Hubble Space Telescope. Image via NASA/ ESA/ P. Jeffries (STScI)/ Hubblesite.

The atmosphere of GJ 1132 b is now apparently quite toxic. Computer modeling suggests the aerosol haze is based on photochemically produced hydrocarbons, similar to smog on Earth.

So how did this new atmosphere develop?

The hydrogen in this exoplanet’s original atmosphere is thought to have been absorbed into the planet’s mantle, the layer of this world below its crust but above its core. Inside the mantle, scientists would expect to find molten magma. That original hydrogen – absorbed into the mantle – is now being released again, these scientists believe, by volcanic activity. Co-author Raissa Estrela of NASA’s Jet Propulsion Laboratory (JPL) said in a statement:

According to Paul Rimmer of the University of Cambridge in the U.K.:

This second atmosphere comes from the surface and interior of the planet, and so it is a window onto the geology of another world. A lot more work needs to be done to properly look through it, but the discovery of this window is of great importance.

Not all planets that lose their primordial atmospheres might be able to generate new ones, but planets like GJ 1132 b show that is indeed possible. Many of those may be sub-Neptunes as well, becoming much smaller after their original thick atmospheres, reminiscent of the gas and ice giants in our solar system, are lost. According to lead author Mark Swain of JPL:

How many terrestrial planets don’t begin as terrestrials? Some may start as sub-Neptunes, and they become terrestrials through a mechanism that photo-evaporates the primordial atmosphere. This process works early in a planet’s life, when the star is hotter. Then the star cools down and the planet’s just sitting there. So you’ve got this mechanism where you can cook off the atmosphere in the first 100 million years, and then things settle down. And if you can regenerate the atmosphere, maybe you can keep it.

Earth also started out with a thick hydrogen atmosphere, but its history is quite different from that of GJ 1132 b. Earth was never a sub-Neptune initially, like GJ 1132 b was. Another big difference is that GJ 1132 b is tidally locked to its star, meaning it always keeps the same side facing the star, much like how the moon always has the same side facing Earth. 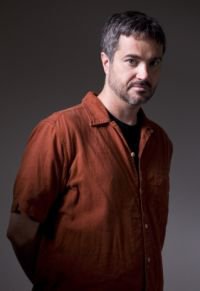 Mark Swain at NASA’s Jet Propulsion Laboratory (JPL) is the lead author of the new study. Image via JPL.

Tidal heating in the interior – resulting from friction, when energy from a planet’s orbit and rotation is dispersed as heat inside the planet – is thought to be responsible for the planet’s probable active volcanism. Swain said:

The question is, what is keeping the mantle hot enough to remain liquid and power volcanism? This system is special because it has the opportunity for quite a lot of tidal heating. GJ 1132 b’s orbit is elliptical, so the tidal forces are strongest when the planet is farthest from and closest to the star. That squeezing and stretching of the planet generates. a lot of heat in its interior. If the mantle then remains liquid, that could feed the active volcanoes.

That same phenomenon can be seen on our solar system, such as with moons like Europa and Io around Jupiter, and Enceladus around Saturn, for example. Similar tidal heating at least partially keeps the water oceans inside Europa and Enceladus liquid. Io doesn’t have a subsurface ocean, but it is the most volcanically active body in our solar system.

Other than its atmosphere, we don’t know much yet about what GJ 1132 b is like, but evidence shows its crust is probably very thin, maybe only hundreds of feet in thickness. That’s too thin for volcanoes as we know them, but the surface may also be cracked like an eggshell, another similarity to Europa. The hydrogen and other gases could then still be released to the surface in that manner, escaping from the mantle deep below.

This atmosphere, if it’s thin – meaning if it has a surface pressure similar to Earth – probably means you can see right down to the ground at infrared wavelengths. That means that if astronomers use the James Webb Space Telescope to observe this planet, there’s a possibility that they will see not the spectrum of the atmosphere, but rather the spectrum of the surface. And if there are magma pools or volcanism going on, those areas will be hotter. That will generate more emission, and so they’ll potentially be looking at the actual geological activity, which is exciting! 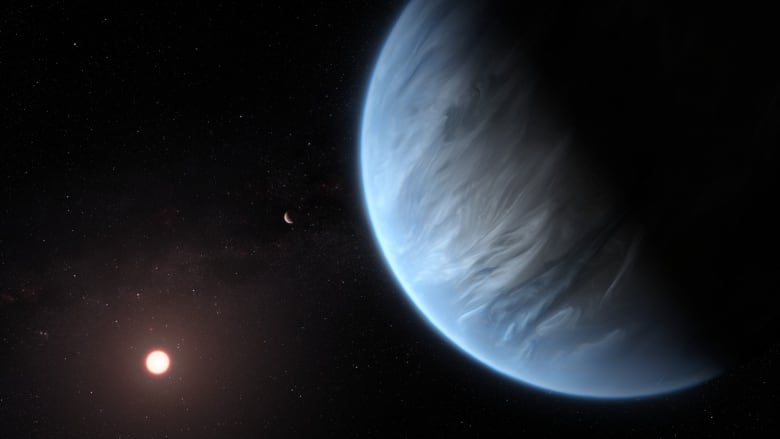 Scientists think that GJ 1132 b started off as a sub-Neptune world, as in this artist’s concept, but then lost its atmosphere due to the intense radiation from its star. It is now an Earth-sized rocky planet with a new atmosphere generated by underground volcanism. Image via ESA/ Hubble/ M. Kornmesser/ CBC.

This result is significant because it gives exoplanet scientists a way to figure out something about a planet’s geology from its atmosphere. It is also important for understanding where the rocky planets in our own solar system, Mercury, Venus, Earth and Mars, fit into the bigger picture of comparative planetology, in terms of the availability of hydrogen versus oxygen in the atmosphere.

Other recent findings suggest that, contrary to previous theories, not all super-Earth planets – worlds larger than Earth but smaller than Neptune – started off as sub-Neptunes. Instead, they formed as, and remained, rocky worlds. Others, like GJ 1132 b, did begin their lives as sub-Neptunes, but later became super-Earth worlds, or even Earth-sized planets, as in the case of GJ 1132 b. According to current observations, about 30%-50% of stars have super-Earths or sub-Neptunes orbiting them. It will be interesting to see how many other Earth-sized or super-Earth exoplanets are found to have secondary atmospheres as well.

Bottom line: For the first time, scientists have found evidence for a secondary atmosphere on an exoplanet, created by volcanism beneath the surface.

Source: Detection of an Atmosphere on a Rocky Exoplanet