Whoa! New and giant telescopes ahead

Telescope technology has come a long way. Here are 4 new amazing machines for observing the universe, both from space and from Earth. 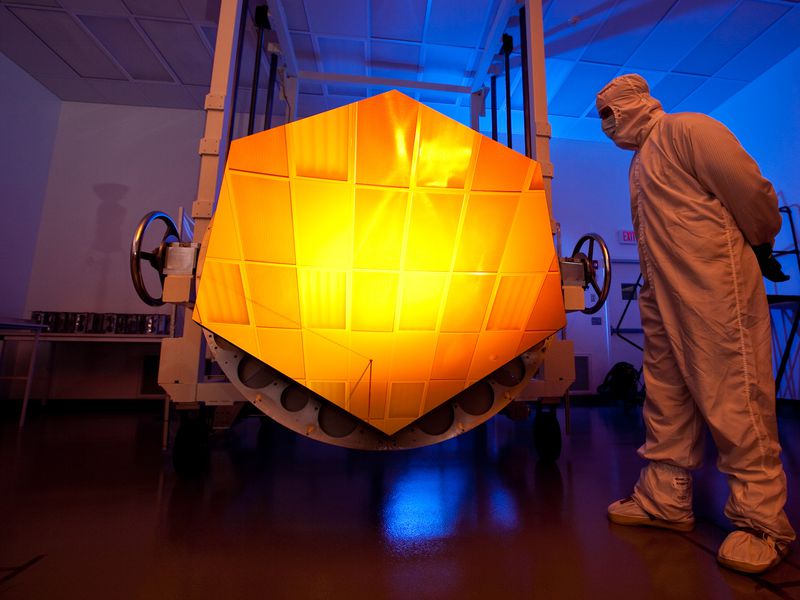 A mirror segment for the James Webb Space Telescope. Each of the telescope’s 18 mirror segments are covered with a thin layer of gold. The Webb – whose launch has been delayed until 2019 – will reflect mostly infrared light. Image via Drew Noel/NASA/Wikimedia Commons.

Human beings have been looking at the stars for as long as we’ve had eyes, wondering what was out there. The early astronomers used the stars to tell time and to navigate, but it wasn’t until Galileo became the first to point a telescope skyward in 1609 that the present age of astronomy was born. In the 20th century, telescopes became enormous constructions with big primary mirrors, housed in their own huge buildings. Now we have orbiting telescopes like Hubble, and telescopes that use technologies Galileo never imagined. The technology has advanced amazingly! Let’s take a closer look at a new space telescope, plus three of the biggest ground-based telescopes being planned today. 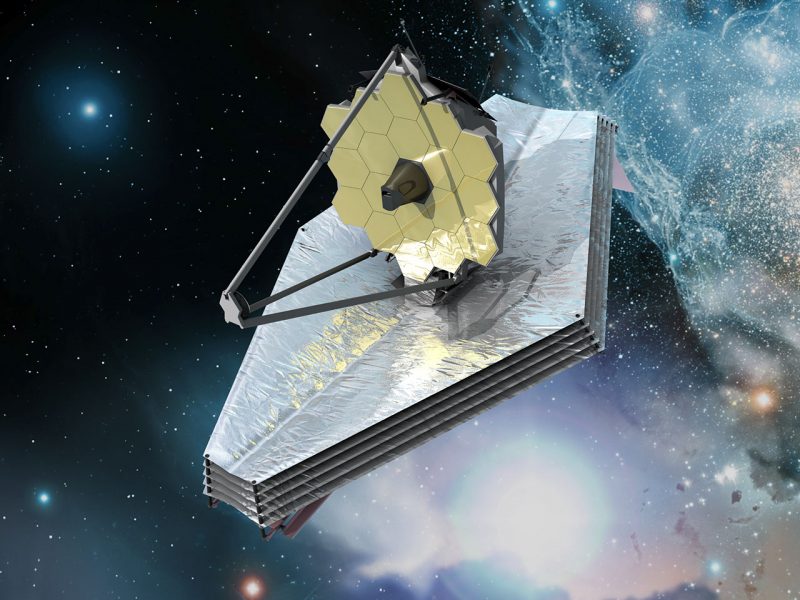 James Webb Space Telescope (JWST). You might hear that the Webb is Hubble’s replacement, but in fact, unlike Hubble, NASA’s Webb telescope is designed to look primarily in the infrared, making it a successor to the Spitzer Space Telescope, too. The Webb telescope is three times the size of Hubble and boasts a 6.5-meter (21-foot) primary mirror. The idea for it arose in the late 1980s and 1990s, with the urge to see farther away in space (at higher redshift objects), and hence farther back in time than ever before. Now – as astronomy has progressed – the goals of the Webb have as well. For example, instead of taking amazing photos of nearby dust clouds, such as those the Hubble made famous, the Webb telescope will be able to see inside dust clouds where planets and stars are being born. It will also, for example, let astronomers study the supermassive black holes that reside at the center of most galaxies, including our own.

The Webb’s two component halves had been at the Johnson Space Center in Houston, where they’d been undergoing many months of cryogenic testing. But – in February 2018 – the telescope and its instruments arrived in California, where they’ll be assembled by Northrop Grumman Aerospace Systems. The completed Webb had been scheduled for launch later this year, but the date was recently pushed back to between March and June 2019.

Still, progress toward launch day is being made. Expect the launch of the James Webb Space Telescope soon, hopefully within about a year. 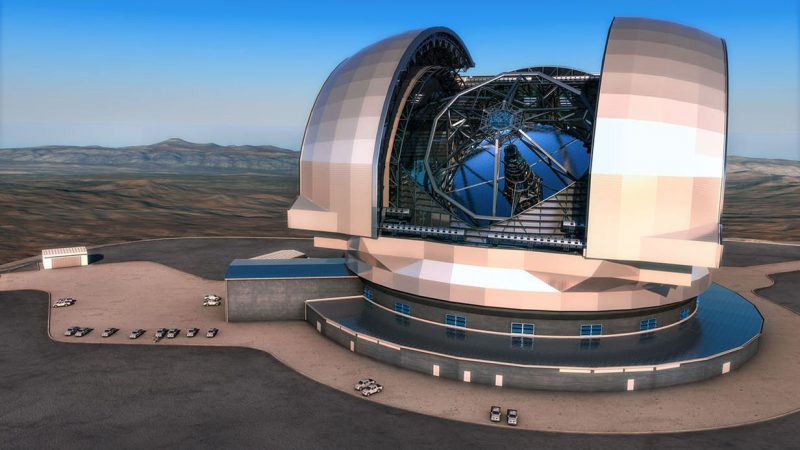 European Extremely Large Telescope (E-ELT). Under the auspices of the European Southern Observatory, the E-ELT is the world’s largest optical/near-infrared telescope now under construction. It’s being built on top of Cerro Armazones (9,993 feet, 3,046 meters) in the Atacama Desert of northern Chile, under one of the clearest and darkest skies in the world. It’s expected to see first light in 2024.

The E-ELT will house a primary mirror 39.3 meters (43 yards, 129 feet) across, which will collect roughly 13 times more light than any currently active telescopes. Read more about E-ELT’s optics here.

The E-ELT will engage in at least two of the biggest questions in astronomy today: what was the earliest universe like, and are there other Earth-like planets? It’ll engage in what its makers describe as stellar archaeology in its attempts to probe the early universe and take part in the search for habitable planets, at times being used to seek signatures of alien life beyond Earth.

This telescope is one of many being built today that astronomers are calling extremely large telescopes. They’re loosely defined as telescopes whose primary mirrors range from about 20 meters (about 22 yards) across up to about 100 meters (about 110 yards) across. These telescopes – which have only become possible in recent years – have a number of features in common, in particular the use of segmented primary mirrors and the use of high-order adaptive optics systems. 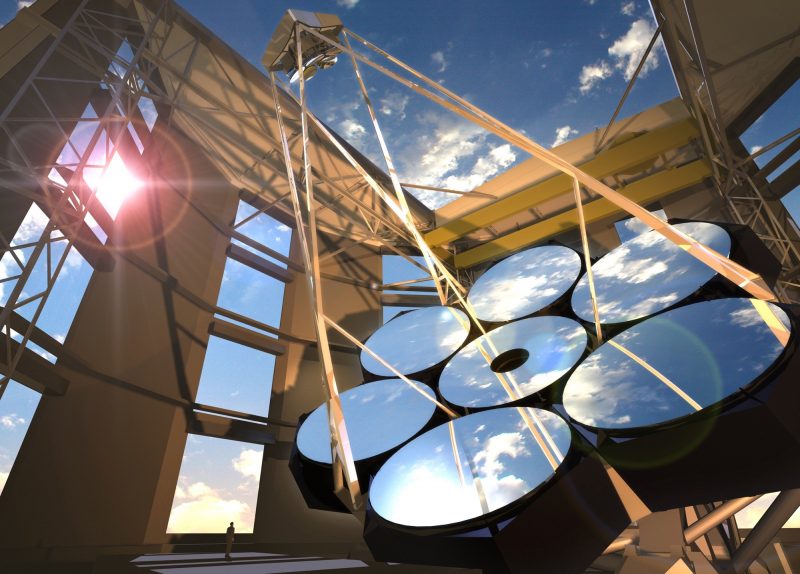 Giant Magellan Telescope (GMT). The GMT is much like the E-ELT in being one of the world’s planned extremely large telescopes. Overseen by an international consortium of universities and science institutions, the telescope’s primary mirror will be a segmented mirror, employing seven stiff monolithic mirrors as the segments. Six off-axis 8.4 meter (27-foot) segments surround a central on-axis segment, forming a single optical surface 24.5 meters (80 feet) across. Its designers say it will be able to see 10 times farther and more clearly than the Hubble Space Telescope. Read more about the GMT’s optics here.

The telescope will go atop Campanas Peak in the Atacama Desert in Chile. The GMT website said the following about its current status:

After a comprehensive review of systems-level designs by an external panel, the GMT Project formally entered construction phase in 2015. Prior to this announcement, the preparation of the GMT mountaintop site in the Chilean Andes began in 2012, and the Richard F. Caris Mirror Lab began casting primary mirror segments in 2005. Work is underway, in one stage or another, on each of the seven GMT mirrors.

First light for the GMT is estimated for 2023. 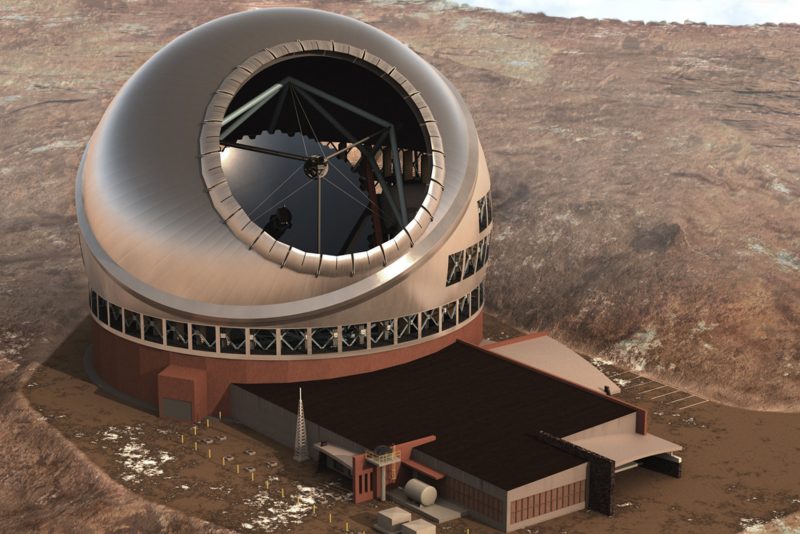 Artist’s concept of the Thirty Meter Telescope on Maunakea in Hawaii. Image via TMT International Observatory.

In late September 2017, the $1.4 billion telescope project finally go the go-ahead to resume construction atop Hawaii’s Maunakea volcano. That was after five months of public hearings in Hawaii, involving 71 witness testimonies and a review of more than 800 submitted documents. Space.com reported:

TMT broke ground in October 2014, but demonstrations the following spring halted the build. Protesters have cited concerns about the telescope project’s cultural and environmental impact; Native Hawaiians regard peaks throughout the island chain as sacred.

First light for the TMT might now come as early as the mid to late 2020s. The telescope is designed to have a primary mirror that’s roughly 30 meters (100 feet) in diameter. The mirror itself will be made up of 492 individual mirrors that will collect more than 10 times the amount of light of other, smaller telescopes. It will adjust for atmospheric conditions.

There are already three other large telescopes on Maunakea. If the TMT’s planners and partners are unable to begin construction by April of 2018, the team says it might decide to abandon the location on Maunakea and instead begin construction at its backup site in the Canary Islands. Stay tuned.

In the meantime, enjoy the chart below. It shows a comparison of the nominal sizes of the apertures (primary mirror diameters) of the some extremely large telescopes being built or planned today, alongside some notable optical telescopes.

Notice especially the Webb, E-ELT, GMT and TMT – a space telescope and three giant ground-based telescopes – sure to revolutionize astronomy in the years ahead. 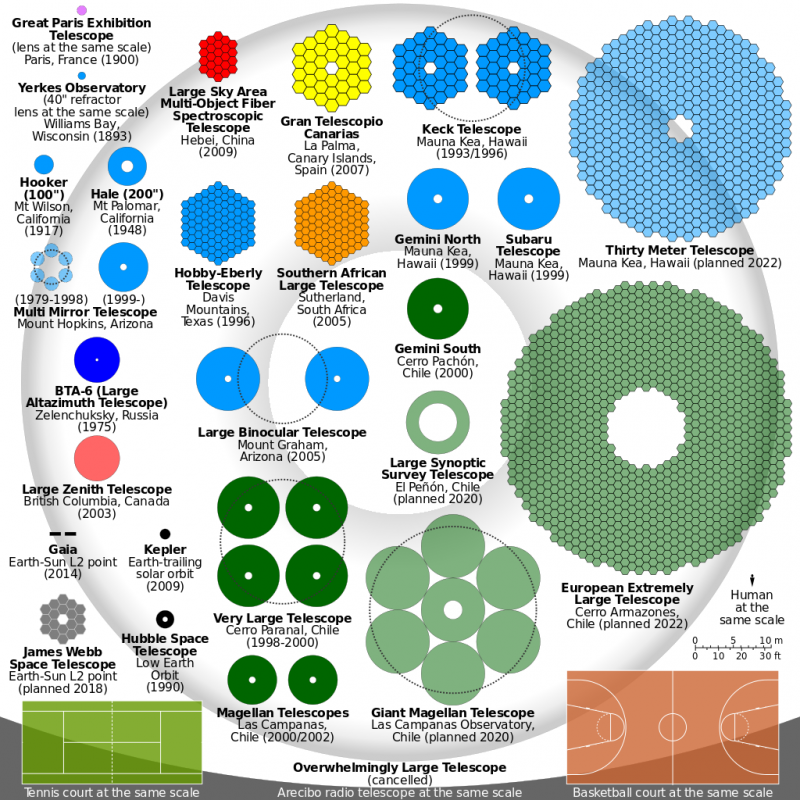