In hot Houston, the telescope hangs in historic Chamber A at Johnson Space Center, with the best air conditioning available. It’ll soon receive a last test of its ability to withstand the cold of space. 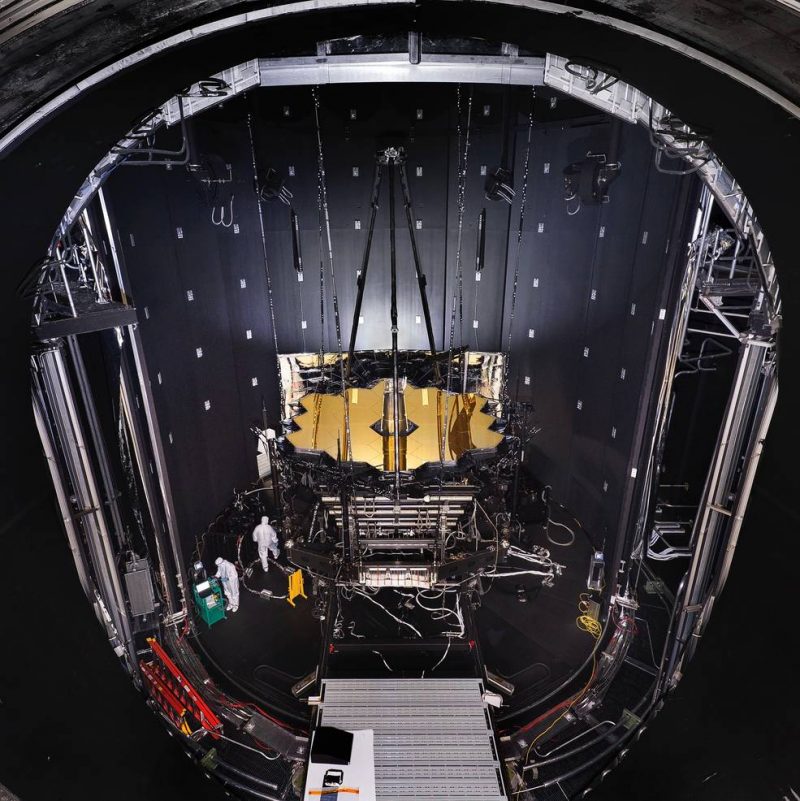 NASA’s James Webb Space Telescope hangs from the ceiling of Chamber A at NASA’s Johnson Space Center in Houston. Can you tell it’s suspended? It’s only a few inches from the rails on the bottom of the chamber, which were used to roll the telescope into place. Image via NASA/ Chris Gunn.

Since May 2017, NASA’s gold-plated James Webb Space Telescope – the largest space observatory ever – has been at the Johnson Space Center in Houston, Texas. It’s about to undergo its final cryogenic test, a test of its ability to withstand the cold of space, before being launched in 2018. And so, although Houston’s temperatures are typically sweltering at this time of year, the telescope will soon be hanging in a vibration-isolating “hammock,” with the best air conditioning available, NASA said.

Engineers at Johnson have suspended it from the ceiling of the Apollo-era test chamber, historic Chamber A. The “hammock” consists of six support rods attached to the platform on which the telescope is sitting, and, according to NASA:

… it’s meant to isolate the telescope from the vibrations Chamber A could produce once the door closes and testing begins, as well as from disturbances that might occur outside the chamber.

Webb will remain suspended in the chamber for the entire cryogenic testing phase, which will last about three months. In space, the telescope must be kept extremely cold, in order to be able to detect the infrared light from very faint, distant objects.

Prior to arriving in Houston, the telescope had been assembled at Goddard Space Flight Center in Greenbelt, Maryland. To get it to Houston, the Webb team loaded it onto a trailer truck and moved it slowly down a highway Joint Base Andrews in Maryland. At Andrews, the entire tractor-trailer, with telescope inside, was driven into a U.S. Air Force C-5C aircraft and flown to Ellington Field in Houston, Texas.

Bottom line: The James Webb Telescope is now at Johnson Space Center in Houston, about to undergo cryogenic testing.