It’s spring, and all around the northern hemisphere gardeners are planting seeds, tilling soil, and watering crops. Imagine a gardener’s surprise, however, if water from the hose, instead of hitting the soil and sinking in, floated up to the sky. Or if the soil itself rose up from the ground and fled the garden. That’s exactly the kind of dilemma astronauts onboard the ISS have faced for years. Without gravity, how do you make your garden grow?

The situation is even more confusing for plants. In a weightless environment, up and down has no meaning, so roots grow in odd, chaotic directions. Shoots that emerge from the soil in search the sun find, instead, a cold metallic lamp that never rises or sets. And needless to say, it never rains onboard the space station.

On April 18th, SpaceX-3 blasted off from Cape Canaveral with a possible solution to these problems. 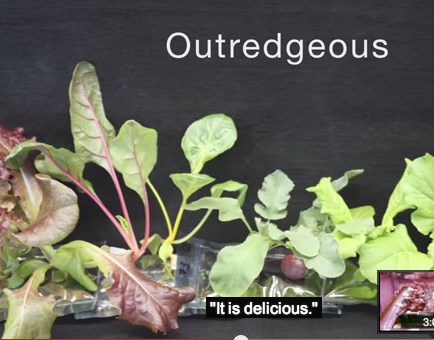 Massa, who leads the Veggie science team, has been working on the project for years. Veggie’s heritage traces back decades to experiments with plants on board the Russian space station Mir and NASA’s space shuttle. In all that time, NASA astronauts have never tasted home-grown food in space—but that could soon change.

“Our first crop will be a variety of lettuce called ‘Outredgeous,'” says Massa. “It is delicious.”

In addition to guiding water, the wicks act as a kind of gardening stake.

“The wicks are where we glue the seeds,” continues Massa. “We have to be very careful to orient the seeds so that roots grow ‘down’ into the soil and shoots pop out of the bag.”

When the shoots emerge, they find an array of LEDs shining overhead, providing light for photosynthesis and a sense of direction to keep the shoots moving “up.” The bellows-like walls of the chamber allow it to expand to make room for the growing crop.

Pictures of Veggie often show the chamber flooded with a mixture of red and blue light. That’s the color of light plants use most for photosynthesis. “We’re just giving them what they want,” says Smith.

Under a purplish light, plants appear gray and unappetizing. “Who wants to look at that?” asks Massa. Astronaut gardeners can switch on green LEDs as well. Adding that color to the red-blue mix produces white light and displays the garden to better effect.

The appearance of the garden is important because, as Massa points out, gardening has psychological as well as nutritional benefits. Compared to Earth, spaceships are a relatively lifeless environment, cold, metallic and sterile. “Plants allow astronauts to form a connection to living things,” she says. “There could be a huge psychological benefit.”

Chalking up another success for commercial space flight, SpaceX’s Dragon capsule delivered Veggie to the ISS on Sunday, April 20th. Massa says the first crop of Outredgeous should be ready for harvesting in late May, but astronauts won’t be allowed to taste-test.
“First, we have to bring the lettuce home for analysis,” she explains. Is it safe to eat? Are there any bacteria growing on the leaves? “These are some of the questions we’ll be looking at. If everything checks out, future crops may be eaten.”
Salad anyone?

Thank you! Your submission has been received!
Oops! Something went wrong while submitting the form.
END_OF_DOCUMENT_TOKEN_TO_BE_REPLACED