Launched last April, TESS is successor to the Kepler mission, which discovered a substantial fraction of all known exoplanets orbiting distant suns. This 1st-light image from TESS is cause for celebration. Ahoy! New worlds ahead! 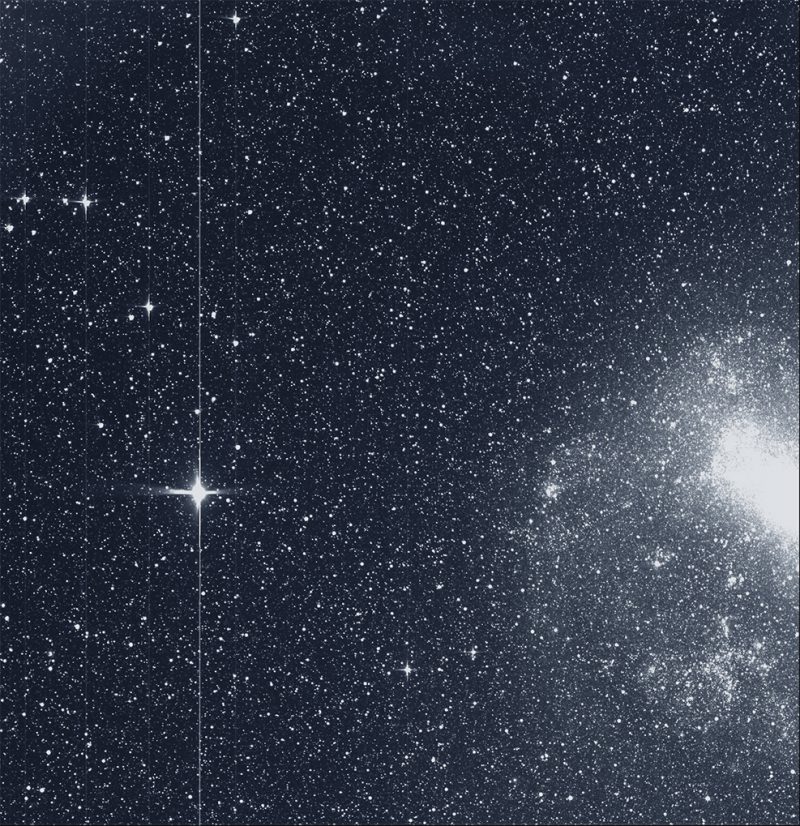 The Transiting Exoplanet Survey Satellite (TESS) took this snapshot of the Large Magellanic Cloud (r) and bright star R Doradus (l) with a single detector of one of its cameras on August 7, 2018. The frame is part of a swath of the southern sky TESS captured in its “1st light” science image as part of its initial round of data collection. View the full 1st light image below. Image via NASA/MIT/TESS.

For any new telescope or astronomical camera, first light is a cause for celebration. On September 17, 2018, NASA released the official first-light images from its newest planet-hunter, called the Transiting Exoplanet Survey Satellite, or TESS. Launched last April, TESS is successor to the highly successful Kepler mission, which discovered some 2,300 exoplanets over the course of its lifetime. The image above is a piece of TESS’ first-light capture; you can see the entire image below. TESS, which orbits Earth in a highly elliptical and very stable orbit (more about that below, too), captured a slice of the southern sky for its first-light image. NASA said:

This first-light science image captures a wealth of stars and other objects, including systems previously known to have exoplanets.

TESS acquired the full image, below, using all four cameras during a 30-minute period on Tuesday, August 7, 2018. NASA explained:

The black lines in the image are gaps between the camera detectors. The images include parts of a dozen constellations, from Capricornus to Pictor, and both the Large and Small Magellanic Clouds, the galaxies nearest to our own. The small bright dot above the Small Magellanic Cloud is a globular cluster — a spherical collection of hundreds of thousands of stars — called NGC 104, also known as 47 Tucanae because of its location in the southern constellation Tucana, the Toucan. Two stars, Beta Gruis and R Doradus, are so bright they saturate an entire column of pixels on the detectors of TESS’s second and fourth cameras, creating long spikes of light. 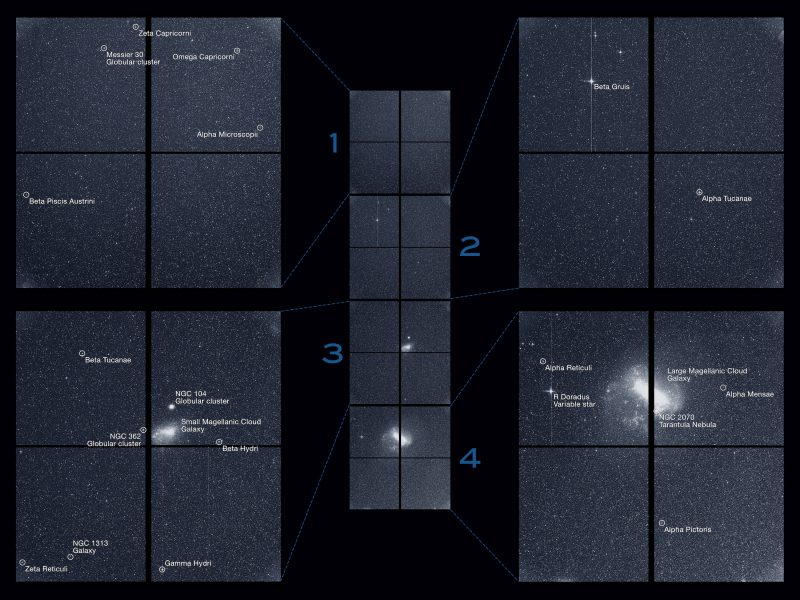 View larger. | Here is the full 1st-light image from TESS, captured in the southern sky during one 30-minute period on on August 7. Created by combining the view from all 4 of its cameras, this 1st-light image from TESS represents the first observing sector that will be used for identifying planets around other stars. Notable features in this swath of the southern sky include the Large and Small Magellanic Clouds and a globular cluster called NGC 104, also known as 47 Tucanae. The brightest stars in the image, Beta Gruis and R Doradus, saturated an entire column of camera detector pixels on the satellite’s second and fourth cameras. Image via NASA/MIT/TESS.

This swath of the sky’s southern hemisphere includes more than a dozen stars we know have transiting planets based on previous studies from ground observatories.

Like Kepler, TESS will be watching for transits, which occur when a planet passes in front of its star from the observer’s perspective, causing a periodic and regular dip in the star’s brightness.

More than 78 percent of the confirmed exoplanets – including those found by Kepler – have been found using transits, according to NASA.

Unlike Kepler – which had a fixed field of view of the sky – TESS will search for exoplanets in some 85 percent of Earth’s sky. Scientists have divided the sky into 26 sectors. TESS will use its four wide-field cameras to map 13 sectors encompassing the southern sky during its first year of observations and 13 sectors of the northern sky during the second year.

And here’s another difference between Kepler and TESS. Most of Kepler’s exoplanets orbit faint stars between 300 and 3,000 light-years from Earth. TESS will focus on much closer stars – between 30 and 300 light-years away – and some 30 to 100 times brighter than Kepler’s targets.

The brightness of these target stars will allow future researchers to use spectroscopy, the study of the absorption and emission of light, to determine a planet’s mass, density and atmospheric composition. Water, and other key molecules, in its atmosphere can give us hints about a planet’s capacity to harbor life.

By the way, TESS captured a test image last May, while sweeping past the moon, almost one month to the day after the craft’s April 18 launch from the Cape Canaveral Air Force Station in Florida. See TESS’ earlier test image here.

And why did TESS sweep past the moon? It was in order to accomplish a gravity assist that moved TESS into its current, very stable and very interesting orbit. The video below explains more about that.