Mars has long been thought to be a geologically dead world. Could there still be volcanic activity beneath its surface? A subsurface lake at Mars’ south pole suggests that possibility. 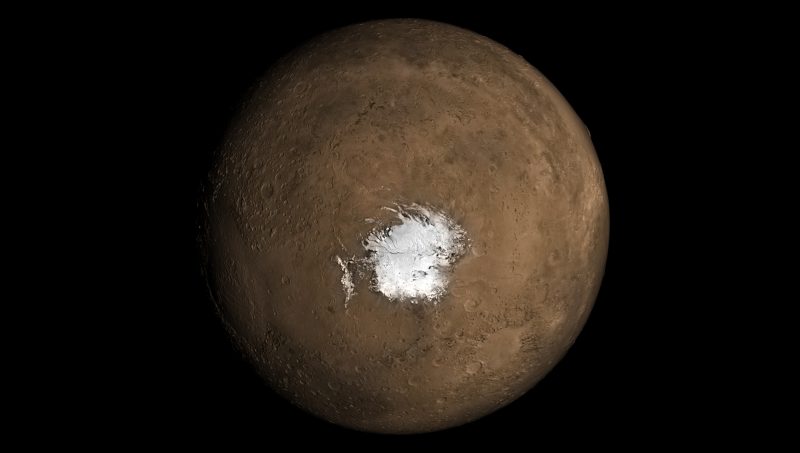 Is there current volcanic activity on Mars? A subsurface lake beneath the south polar ice cap may indicate that there is. Image via NASA.

Mars has the largest known volcanoes in the solar system, which show that it was once very geologically active. But so far, the available evidence has suggested that the planet’s period of volcanic activity ended millions of years ago – that those massive calderas have been dormant for a very long time.

But now, it seems that may not quite be the case, after all – there may still be some residual activity deep underground, according to a new peer-reviewed paper in Geophysical Research Letters. From the paper’s summary:

Recent radar observations from the European Space Agency’s Mars Express spacecraft have been interpreted as evidence for melting beneath the ice at the south pole of Mars. We model the temperatures in the subsurface to determine the necessary conditions to achieve liquid water at the base of the ice cap. Salts lower the melting point of ice, with calcium perchlorate generating the lowest temperatures at which melting can be achieved. However, even if there are local concentrations of large amounts of these salts at the base of the south polar ice, typical Martian conditions are too cold to melt the ice. We find that a local heat source within the crust is needed to increase the temperatures, and a magma chamber within 10 km (6 miles) of the ice could provide such a heat source. This result suggests that if the liquid water interpretation of the observations is correct, magmatism on Mars may have been active extremely recently. 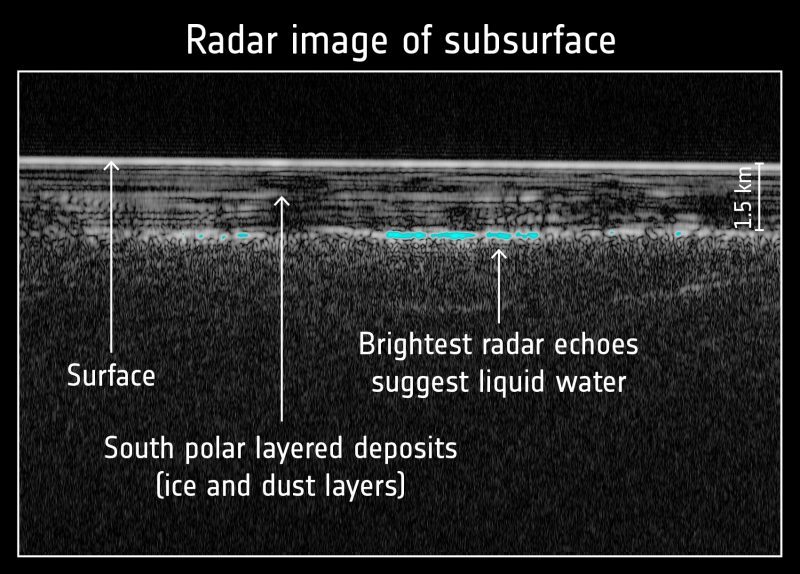 The study’s findings are tied into those of a previous paper from last year, which presented evidence for a large subsurface liquid water lake currently existing beneath the south polar ice cap. The new study says that in order for such a lake to exist, there must be a source of heat deep below the surface – basically recent magmatic activity within the past few hundred thousand years. That is very recent geologically-speaking, and such heat could still be there today. Michael Sori, an associate staff scientist in the Lunar and Planetary Laboratory (LPL) at the University of Arizona and a co-lead author of the new paper, acknowledges that the new paper will be cause for some debate:

Different people may go different ways with this, and we’re really interested to see how the community reacts to it.

The big question of course is what this may mean for the search for life. If there is both liquid water and a source of heat, that would greatly increase the chances of some kind of life – albeit probably still just microbial – existing below the surface. According to Ali Bramson, a postdoctoral research associate also at LPL and a co-lead author of the new paper:

We think that if there is any life, it likely has to be protected in the subsurface from the radiation. If there are still magmatic processes active today, maybe they were more common in the recent past, and could supply more widespread basal melting. This could provide a more favorable environment for liquid water and thus, perhaps, life. 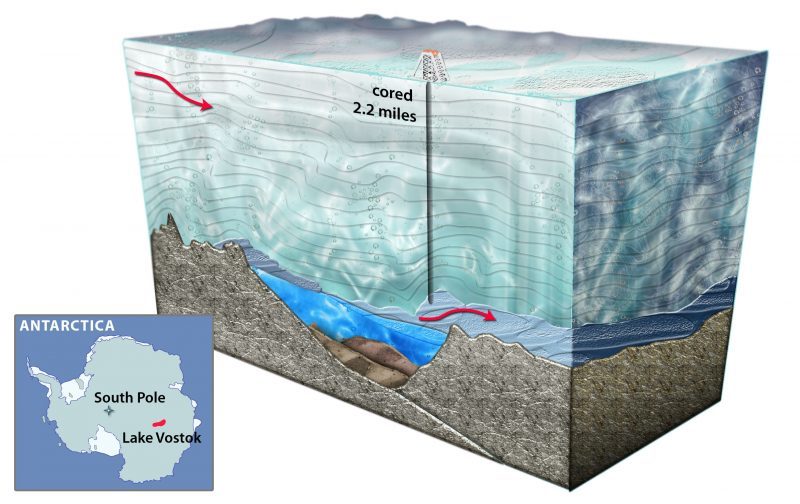 The suspected subsurface lake on Mars is thought to be similar to Lake Vostok in Antarctica. But the Martian lake would likely need heat from volcanic magma to remain liquid. Image via National Science Foundation.

A liquid water lake beneath the south polar ice wouldn’t be too surprising, actually, since they also exist beneath the polar caps on Earth. But scientists aren’t sure how they would remain liquid on Mars, since the planet is generally a lot colder than Earth. As Sori noted:

So if the water really is there, as announced last year, what keeps it liquid? The research team for the new paper did modeling experiments of Mars’ subsurface – in particular, looking at whether salts alone would be sufficient. They concluded that salts by themselves would likely not be able to raise the temperature enough at the base of the ice cap, and that additional heat would be required.

So where would that heat come from? The most plausible source would be volcanic activity below ground – a magma chamber below the ice cap. The team estimated that magma rose toward the surface from deep below about 300,000 years ago, but didn’t reach the surface, instead remaining in the chamber. The heat from the chamber melted the bottom of the ice cap, forming the lake. But most significantly, it would still need to be providing that heat today, not just hundreds of thousands of years ago. As Bramson noted:

This would imply that there is still active magma chamber formation going on in the interior of Mars today and it is not just a cold, sort of dead place, internally. 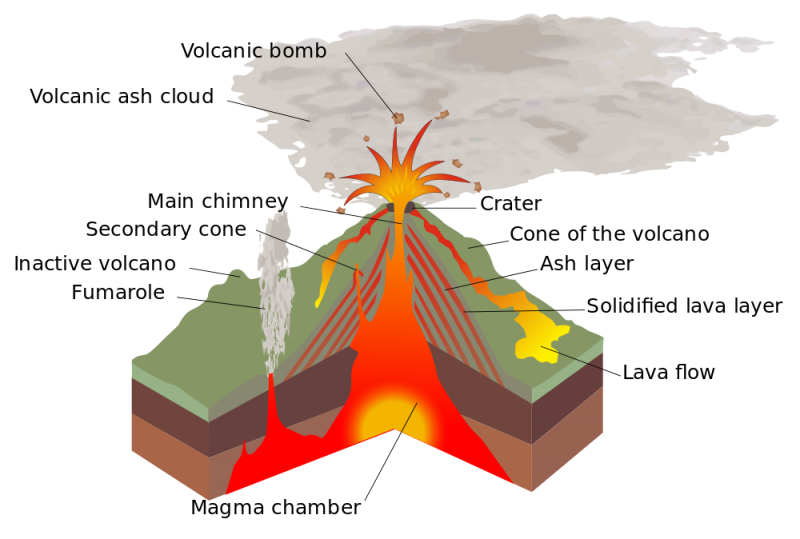 The new paper will help scientists to better understand how the water in the subsurface lake got there – if confirmed – and how it is able to remain liquid, according to Jack Holt, a professor at LPL:

I think it was a great idea to do this type of modeling and analysis because you have to explain the water, if it’s there, and so it’s really a critical piece of the puzzle. The original paper just left it hanging. There could be water there, but you have to explain it, and these guys did a really nice job of saying what is required and that salt is not sufficient.

Bottom line: A new study says that volcanic activity could still be present underground on Mars, which would help to explain the findings from a previous study providing evidence for a large subsurface lake beneath the ice at Mars’ south pole. Both findings could have significant implications in the search for life on Mars.

Source: Water on Mars, with a grain of salt: local heat anomalies are required for basal melting of ice at the south pole today