“Winds must blow away a large fraction of the matter a black hole could eat,” researchers said. 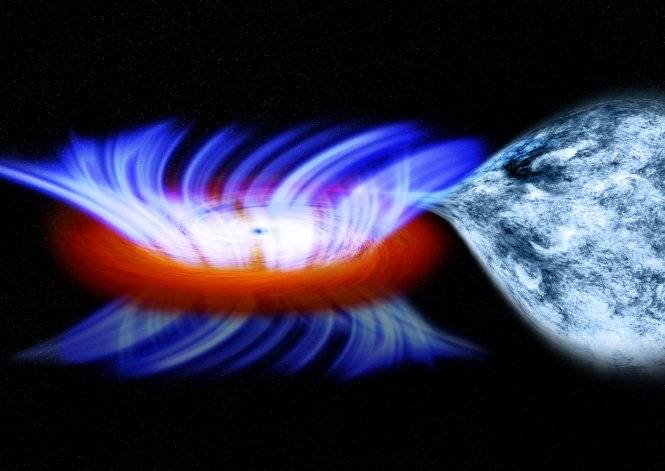 Artist’s concept of a stellar-mass black hole (left) with its companion star. The hole’s gravity pulls gas away from the companion, and the gas forms what’s called an accretion disk around the hole. A black hole “wind” is driven off this disk. Image via NASA.

New research provides the first evidence of strong winds from the disks surrounding stellar-mass black holes throughout “gorging” events, during which the holes are rapidly consuming mass. The researchers think the winds might act as a barrier, preventing the holes from consuming as much mass as they otherwise would. The results were published January 22, 2018, in the peer-reviewed journal Nature. Bailey Tetarenko is a University of Alberta Ph.D. student and lead author of the study. She said:

Winds must blow away a large fraction of the matter a black hole could eat. In one of our models, the winds removed 80 per cent of the black hole’s potential meal.

Thus small black holes might have surprisingly large effects, as so much material being pushed away would afterwards interact with the rest of a black hole’s home galaxy.

Tetarenko is part of an international research team that examined several space-based data sources, going back to 1996. The team was looking for bright outbursts of X-ray emission, thought to occur when black holes suddenly and rapidly consume mass. Tetarenko’s professor and co-author Gregory Sivakoff, also of University of Alberta, told TorontoMetro:

When [Bailey] started showing us the results … I think our mouths started dropping. Because we realized that her results were getting at something very, very critical in our field

Oftentimes you’re nibbling at the edges of the field, but this is getting to the heart of our field.

The team saw evidence of consistent and strong winds surrounding black holes throughout outbursts. Until now, strong winds had only been seen in limited parts of these events.

They also observed that stellar-mass black holes can consume everything within a radius of about two to 100 miles (three to 150 km), depending on their size.

Yet the small and large black holes might share certain behaviors, and thus Sivakoff said this research sheds light on big questions. He said:

Our galaxy seems to be a fairly typical galaxy. We know that there is a supermassive black hole at the center of our galaxy.

And so it might mean that as we learn how in general black holes feed and affect their environment, we may be learning more about the specifics of how our supermassive black hole affected how our galaxy formed, and in the end … how we got here.

Bottom line: Researchers at University of Alberta have evidence that winds from the accretion disks surrounding stellar-mass black holes push away as much as 80 percent of the material the holes would otherwise consume.

Via Folio and Toronto Metro