Some black holes erase your past

You can’t survive a passage into a black hole … or can you? A UC Berkeley mathematician says you could enter certain types of black holes, but your past would be obliterated and you’d have an infinite number of possible futures.

A reasonably realistic simulation of falling into a black hole shows how space and time are distorted, and how light is blue shifted as you approach the inner or Cauchy horizon, where most physicists think you would be annihilated. However, a UC Berkeley mathematician argues that you could, in fact, survive passage through this horizon.

In the real world, your past uniquely determines your future. If a physicist knows how the universe starts out, she can calculate its future for all time and all space.

But a UC Berkeley mathematician has found some types of black holes in which this law breaks down. If someone were to venture into one of these relatively benign black holes, they could survive, but their past would be obliterated and they could have an infinite number of possible futures.

Such claims have been made in the past, and physicists have invoked strong cosmic censorship to explain it away. That is, something catastrophic – typically a horrible death – would prevent observers from actually entering a region of spacetime where their future was not uniquely determined. This principle, first proposed 40 years ago by physicist Roger Penrose, keeps sacrosanct an idea – determinism [cause and effect] – key to any physical theory.

That is, given the past and present, the physical laws of the universe do not allow more than one possible future.

But, says UC Berkeley postdoctoral fellow Peter Hintz, mathematical calculations show that for some specific types of black holes in a universe like ours, which is expanding at an accelerating rate, it is possible to survive the passage from a deterministic world into a non-deterministic black hole.

What life would be like in a space where the future was unpredictable is unclear. But the finding does not mean that Einstein’s equations of general relativity, which so far perfectly describe the evolution of the cosmos, are wrong, said Hintz. He said:

No physicist is going to travel into a black hole and measure it. This is a math question. But from that point of view, this makes Einstein’s equations mathematically more interesting. This is a question one can really only study mathematically, but it has physical, almost philosophical implications, which makes it very cool.

Hintz and his colleagues published a paper describing these unusual black holes in January 2018 in the journal Physical Review Letters.

Beyond the Event Horizon

Black holes are bizarre objects that get their name from the fact that nothing can escape their gravity, not even light. If you venture too close and cross the so-called event horizon, you’ll never escape.

For small black holes, you’d never survive such a close approach anyway. The tidal forces close to the event horizon are enough to spaghettify anything: that is, stretch it until it’s a string of atoms. 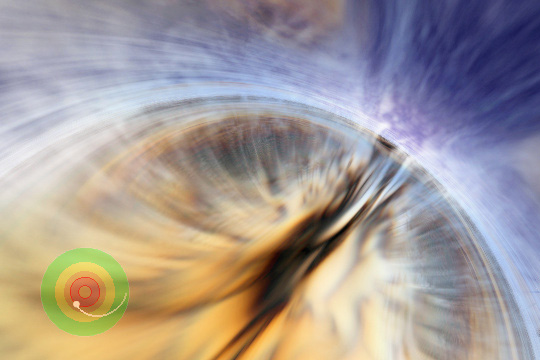 Still image taken from an animation by Andrew Hamilton, based on supercomputer simulation by John Hawley.

But for large black holes, like the supermassive objects at the cores of galaxies like the Milky Way, which weigh tens of millions if not billions of times the mass of a star, crossing the event horizon would be, well, uneventful.

Because it should be possible to survive the transition from our world to the black hole world, physicists and mathematicians have long wondered what that world would look like, and have turned to Einstein’s equations of general relativity to predict the world inside a black hole. These equations work well until an observer reaches the center, or singularity, where in theoretical calculations the curvature of spacetime becomes infinite.

Even before reaching the center, however, a black hole explorer – who would never be able to communicate what she found to the outside world – could encounter some weird and deadly milestones. Hintz studies a specific type of black hole – a standard, non-rotating black hole with an electrical charge – and such an object has a so-called Cauchy horizon within the event horizon.

The Cauchy horizon is the spot where determinism breaks down, where the past no longer determines the future. Physicists, including Penrose, have argued that no observer could ever pass through the Cauchy horizon point because they would be annihilated.

As the argument goes, as an observer approaches the horizon, time slows down, since clocks tick slower in a strong gravitational field. As light, gravitational waves and anything else encountering the black hole fall inevitably toward the Cauchy horizon, an observer also falling inward would eventually see all this energy barreling in at the same time. In effect, all the energy the black hole sees over the lifetime of the universe hits the Cauchy horizon at the same time, blasting into oblivion any observer who gets that far.

You Can’t See Forever in an Expanding Universe

Hintz realized, however, that this may not apply in an expanding universe that is accelerating, such as our own. Because spacetime is being increasingly pulled apart, much of the distant universe will not affect the black hole at all, since that energy can’t travel faster than the speed of light. 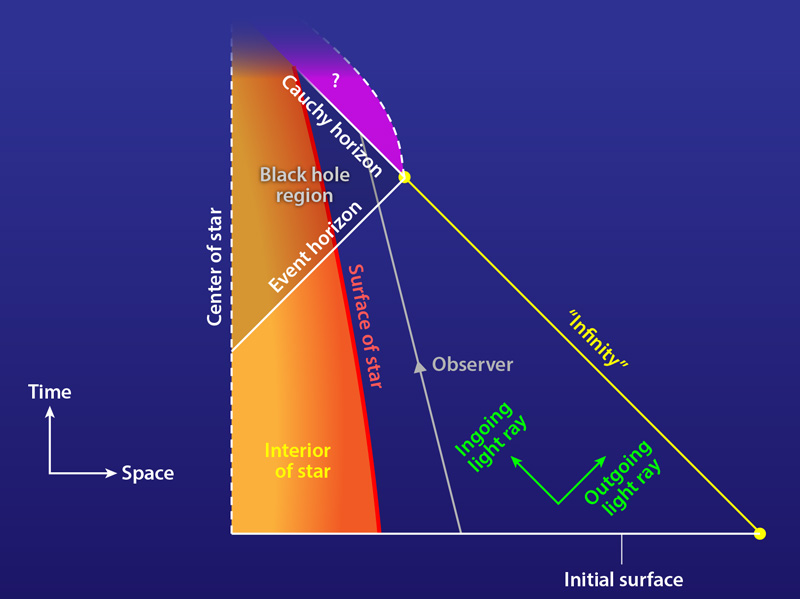 A spacetime diagram of the gravitational collapse of a charged spherical star to form a charged black hole. An observer traveling across the event horizon will eventually encounter the Cauchy horizon, the boundary of the region of spacetime that can be predicted from the initial data. Hintz and his colleagues found that a region of spacetime, denoted by a question mark, cannot be predicted from the initial data in a universe with accelerating expansion, like our own. This violates the principle of strong cosmic censorship. Image via APS/Alan Stonebraker.

In fact, the energy available to fall into the black hole is only that contained within the observable horizon: the volume of the universe that the black hole can expect to see over the course of its existence. For us, for example, the observable horizon is bigger than the 13.8 billion light-years we can see into the past, because it includes everything that we will see forever into the future. The accelerating expansion of the universe will prevent us from seeing beyond a horizon of about 46.5 billion light-years.

In that scenario, the expansion of the universe counteracts the amplification caused by time dilation inside the black hole, and for certain situations, cancels it entirely. In those cases – specifically, smooth non-rotating black holes with a large electrical charge, so-called Reissner-Nordström-de Sitter black holes – an observer could survive passing through the Cauchy horizon and into a non-deterministic world. Hintz said:

There are some exact solutions of Einstein’s equations that are perfectly smooth, with no kinks, no tidal forces going to infinity, where everything is perfectly well behaved up to this Cauchy horizon and beyond.

Hintz noted that the passage through the horizon would be painful but brief.

After that, all bets are off; in some cases, such as a Reissner-Nordström-de Sitter black hole, one can avoid the central singularity altogether and live forever in a universe unknown.

That is upsetting, the idea that you could set out with an electrically charged star that undergoes collapse to a black hole, and then Alice travels inside this black hole and if the black hole parameters are sufficiently extremal, it could be that she can just cross the Cauchy horizon, survives that and reaches a region of the universe where knowing the complete initial state of the star, she will not be able to say what is going to happen. It is no longer uniquely determined by full knowledge of the initial conditions. That is why it’s very troublesome.

Hintz’s paper has already sparked other papers, one of which purports to show that most well-behaved black holes will not violate determinism. But Hintz insists that one instance of violation is one too many. He said:

People had been complacent for some 20 years, since the mid ‘90s, that strong cosmological censorship is always verified. We challenge that point of view.

Bottom line: A UC Berkeley mathematician suggests that there are some types of black holes in which the law of determinism breaks down.