Scientists have been trying to figure what creates the so-called “bathtub rings” around lakes and seas on Saturn’s large moon Titan. Now they may have an answer: unusual organic crystals not found on Earth. 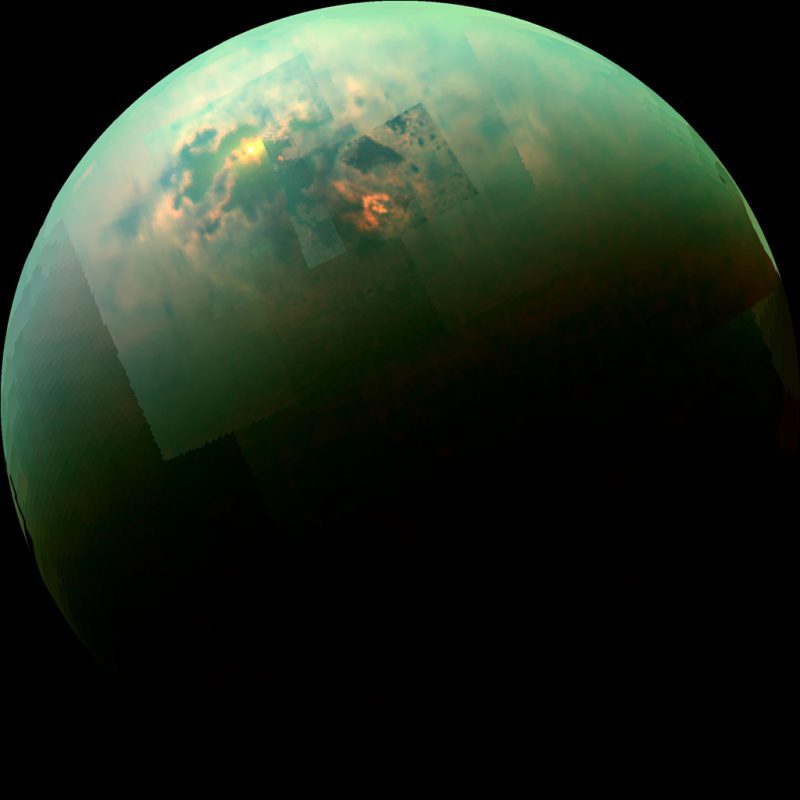 Infrared view of seas and lakes in Titan’s northern hemisphere, taken by Cassini in 2014. Sunlight can be seen glinting off the southern part of Titan’s largest sea, Kraken Mare. Scientists now think that “bathtub rings” around the edges of the seas and lakes are composed of organic crystals. Image via NASA/JPL-Caltech/University of Arizona/University of Idaho/AGU 100.

Saturn’s moon Titan is the only other body in the solar system besides Earth known to have liquids on its surface. These rains, rivers, lakes and seas look very much like those on Earth, but are composed of liquid methane and ethane (hydrocarbons) instead of water. Now, scientists have found another way in which they might differ from their earthly counterparts: the shorelines of the lakes and seas might be encrusted with “bathtub rings” composed of organic crystals not found on Earth.

The new research was published in a new paper and presented on June 24 at the 2019 Astrobiology Science Conference (AbSciCon 2019) in Bellevue, Washington. 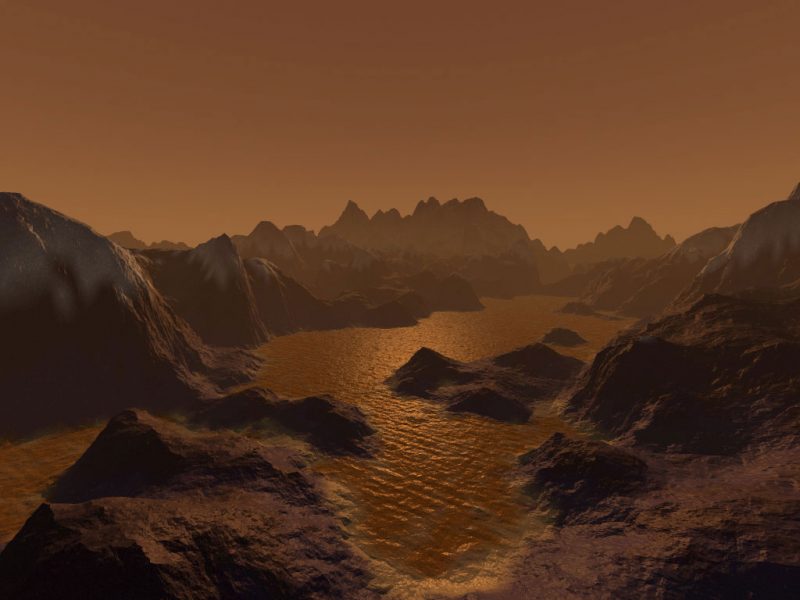 Artist’s concept of a hydrocarbon lake on Titan as seen from the ground. Image via Steven Hobbs (Brisbane, Queensland, Australia/NASA).

The intriguing results come from laboratory tests where Titan-like conditions were recreated. The scientists found compounds and minerals that do not exist on Earth, and one co-crystal was made of solid acetylene and butane, which do exist on Earth, but only as gases. Titan is so cold, however, that acetylene and butane will freeze solid and combine to form crystals.

So how did the scientists create Titan-like conditions in a laboratory on Earth? Titan is extremely cold, about -290 degrees Fahrenheit (-179 degrees Celsius), so they used a custom-built cryostat, an apparatus that keeps things cold. Titan’s atmosphere is mostly nitrogen, like Earth’s, so next they filled the cryostat with liquid nitrogen. But they needed the nitrogen to be a gas, like on Titan, so they warmed the chamber slightly. Methane and ethane were then added, which are also very common on Titan. They are both in liquid form on the moon, in the rain, rivers, lakes and seas. The result was a hydrocarbon-rich “soup.” 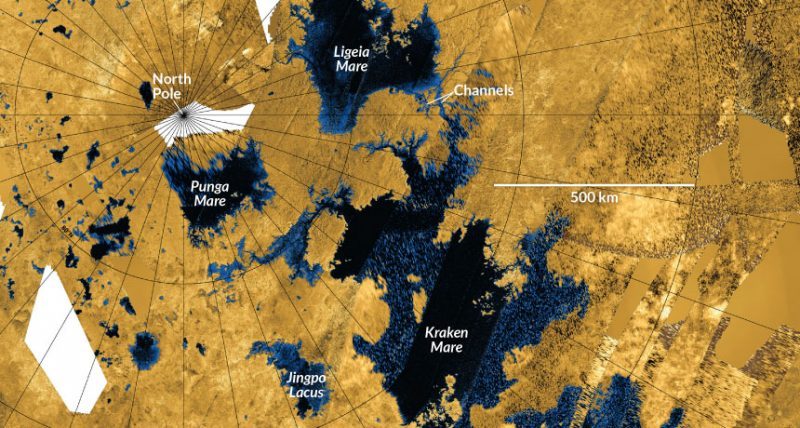 Map of Titan’s seas and lakes in the northern hemisphere. Image via JPL-Caltech/NASA/ASI/USGS/EarthSky.

The surface of Titan as seen by the Huygens lander in 2005. Huygens found damp sand when it landed near an evaporated riverbed. The liquid was methane/ethane, but the “rocks” turned out to be composed of solid water ice. Image via ESA/NASA/University of Arizona/EarthSky.

Benzene crystals were the first to be seen forming in this soup. Benzene is found in gasoline on Earth and is a snowflake-shaped molecule made out of a hexagonal ring of carbon atoms. But something else surprising happened in the simulated Titan conditions: the benzene molecules rearranged themselves in such a way that they allowed ethane molecules inside them, creating a co-crystal. The researchers also later discovered an acetylene and butane co-crystal as well, which is thought to probably be more common on Titan.

It is the acetylene and butane co-crystals that likely create the bathtub rings – evaporated minerals – around the edges of the lakes and seas. The minerals would be dropped out on the surface as the liquid hydrocarbons started to evaporate. Some lakes were seen on Titan by the Cassini spacecraft when they were full of liquid, and at other times when they had partially evaporated. This evaporation process is similar to how salts can form crusts around the edges of lakes and seas on Earth.

The bathtub rings on Titan are suspected to exist based on evidence from Cassini, but haven’t been fully confirmed yet, as noted by Morgan Cable at the Jet Propulsion Laboratory:

We don’t know yet if we have these bathtub rings … It’s hard to see through Titan’s hazy atmosphere. 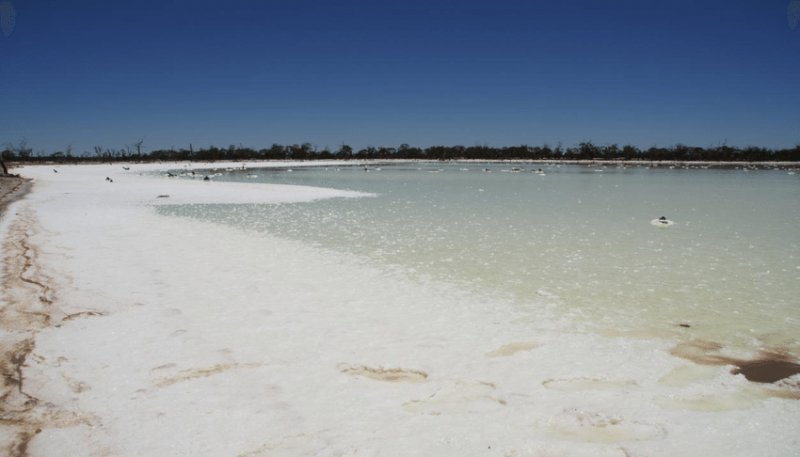 An acidic salt lake south of Beacon, West Australia. The salt encrustations around its edges are thought to be similar to the bathtub rings around the edges of lakes and seas on Titan. Image via Suzanne M. Rea/ResearchGate.

Titan’s rivers, lakes and seas, mostly near the north pole, give this moon an eerily Earth-like appearance. There is also methane rain and massive sand dunes near the equator, like in deserts on Earth, but composed of hydrocarbon particles. The thick, hazy atmosphere obscures the ground from view from above, but Cassini was able to use use radar to see surface features. The Huygens probe, part of the Cassini mission, also sent back the first-ever photos from Titan’s surface in 2005, showing an evaporated riverbed with “rocks” composed of solid water ice. Beneath all of that, out of view, is a subsurface water ocean. Titan may look a lot like Earth in many ways, but in terms of composition, it is a distinctly alien world.

Unfortunately, Cassini’s mission ended in late 2017, so further observations of the bathtub rings will have to wait until a future mission returns to Titan. Probes that could float or swim in one of the lakes or seas have been proposed, but are still just on the drawing boards right now. However, NASA’s new Dragonfly mission, just officially announced last week, will send a drone-like rotorcraft to fly through Titan’s skies, making numerous landings at different locations of interest. Dragonfly is scheduled to launch in 2026 and land in 2034. Exciting!

Bottom line: By simulating Titan’s conditions in a laboratory on Earth, scientists have found that unusual forms of organic crystals may create bathtub rings around the edges of the moon’s lakes and seas.