In video footage taken from the Rosetta spacecraft on July 11, 2014 – as it speeds towards Comet 67P/Churyumov-Gerasimenko – scientists have identified what looks like a double nucleus, or core, for the comet. The images shown above have been artifically “smoothed;” the actual images are more pixelated due to the thousands of miles that still separate Rosetta from its comet. Still, the double structure seems clear. Emily Lakdawalla of the Planetary Society wrote about the finding in her blog earlier today (July 15). She wrote:

The nucleus of the comet is clearly a contact binary – two smaller (and unequally sized object) in close contact. The CNES page where this photo was released says the whole nucleus measures 4 by 3.5 kilometers, in good agreement with Hubble and Spitzer estimates. Philippe Lamy is quoted as estimating that the two components would have come into contact at a relative speed of about 3 meters per second in order to stick together in this way.

Only a handful of spacecraft have ever got up close to a comet … While a contact binary may be a surprise to scientists, the irregular shape spotted from afar was something that we’ve seen before in other comets.

‘Irregular, elongated, and structured shapes are not uncommon for small bodies such as asteroids and comets,’ stated the Max Planck Institute for Solar System Research in a release last week. ‘Of the five cometary nuclei that have been visited by spacecraft in close flybys so far, all are far from spherical.’

The European Space Agency (ESA) mission team will have to take the double nucleus of 67P/Churyumov-Gerasimenko as it plans how to land on the comet later this year. The CNES release quoted the lander’s navigator Eric Jurado as saying that:

… navigation around such a body should not be much more complex than around a nucleus of irregular spherical type, but landing the Philae probe, however, could be more difficult, as this form restricts potential landing zones.

Meanwhile, across the globe on Tuesday, planetary scientists were exuberant over the new findings, and some, including @Alex_Parker on Twitter had fun with the new images … 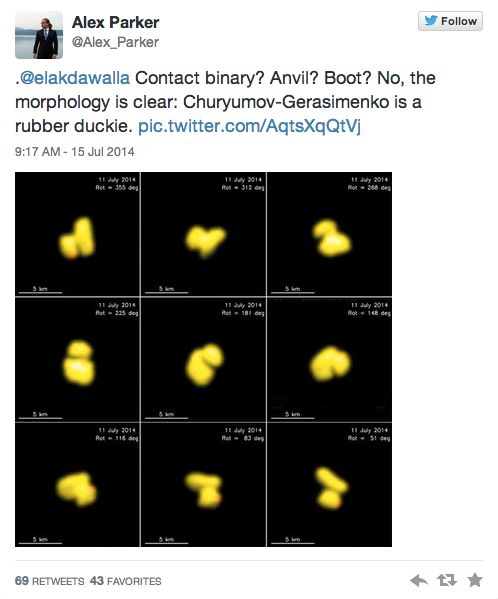 Bottom line: New images of 67P/Churyumov-Gerasimenko, taken on July 11, reveal a double comet core. The more complex shape for the comet “restricts potential landing zones.” The landing on the comet is scheduled for November 11 of this year.

Thank you! Your submission has been received!
Oops! Something went wrong while submitting the form.
END_OF_DOCUMENT_TOKEN_TO_BE_REPLACED