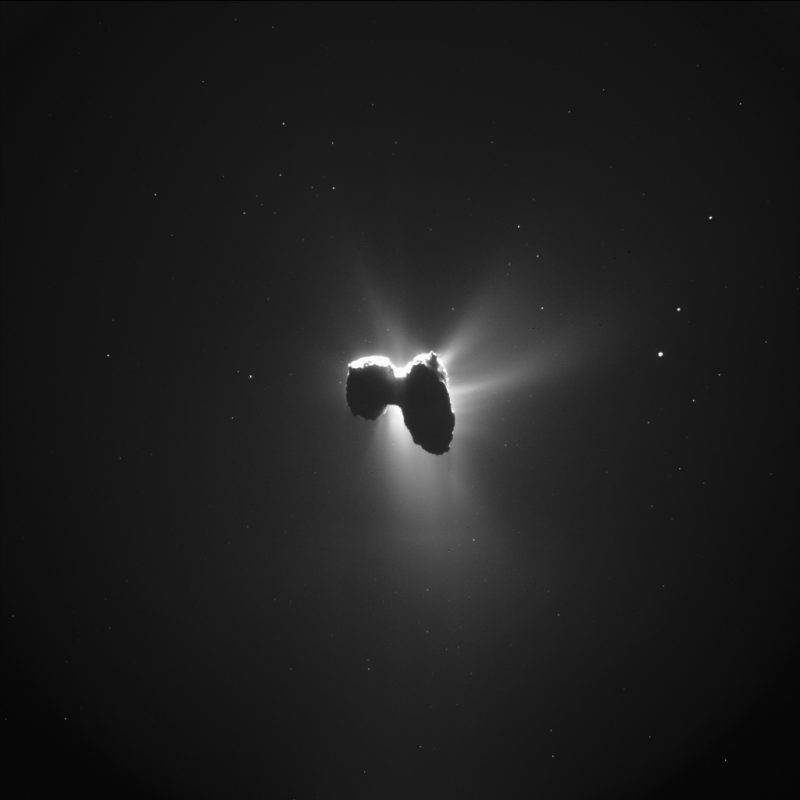 What are the factors that cause a world in space to evolve? In the case of Earth, plate tectonics – the movement of the great plates of land that compose Earth’s crust – played a major role. But what if the world is very tiny, like a comet? And what if it’s made of icy materials, not rocky materials like Earth? On February 19, 2019, the European Space Agency (ESA) described a new study pointing out a key process that shaped the evolution of comet 67P/Churyumov-Gerasimenko. This is the comet that was studied close-up, from orbit, by ESA’s Rosetta spacecraft for two years between August 2014 and September 2016. According to the new study, plate tectonics isn’t the driving process. Instead, ESA said, comet 67P/C-G likely evolved primarily due to geological stress arising from the comet’s dual-lobed shape.

Small, icy comets with two distinct lobes seem to be commonplace in the solar system, with one possible mode of formation a slow collision of two primordial objects in the early stages of formation some 4.5 billion years ago. A new study using data collected by Rosetta during its two years at Comet 67P/C-G has illuminated the mechanisms that contributed to shaping the comet over the following billions of years.

Christophe Matonti of Aix-Marseille University, France, is lead author of the new study. He said:

We found networks of faults and fractures penetrating 500 meters (1,640 feet) underground, and stretching out for hundreds of meters. 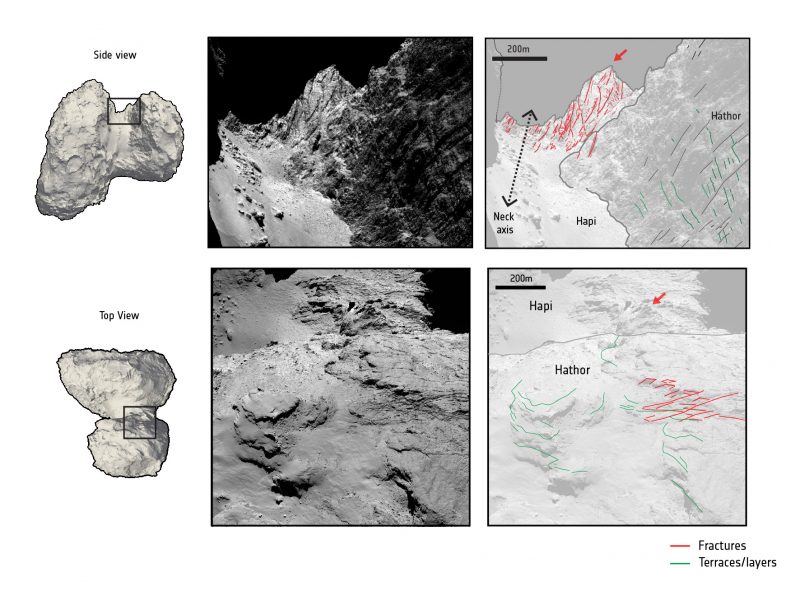 Stress-formed fractures and terraces on Rosetta’s comet, via ESA.

According to the new study, these faults and fractures in the comet were created by shear stress, a mechanical force often seen at play in earthquakes or glaciers on Earth and other terrestrial planets. Shear stress happens when two bodies or blocks push and move along one another in different directions. Matonti commented:

This is hugely exciting: it reveals much about the comet’s shape, internal structure, and how it has changed and evolved over time.

These scientists said the model they developed found shear stress to peak at the center of the comet’s “neck,” the thinnest part of the comet connecting the two lobes. Co-author Olivier Groussin, also of Aix-Marseille University, France, said:

It’s as if the material in each hemisphere is pulling and moving apart, contorting the middle part – the neck – and thinning it via the resulting mechanical erosion.

We think this effect originally came about because of the comet’s rotation combined with its initial asymmetric shape. A torque formed where the neck and ‘head’ meet as these protruding elements twist around the comet’s center of gravity.

The scientists said their observations suggest shear stress acted globally over the comet and, crucially, around its neck. The fact that fractures could propagate so deeply into 67P/C-G also confirms that the material making up the interior of the comet is brittle, they said, something that was previously unclear.

But shear stress wasn’t the only factor at play on comet 67P/C-G. When comets come close to the sun, as this comet did in 2015, ices on their surface turn to vapor without ever going through a liquid phase. This process, known as sublimation, results in comet dust being dragged out into space. The scientists said this process of sublimation is a well-known process for deeply influencing a comet’s appearance over time. You can get a sense of some of the changes undergone by comet 67P/C-G in these images of dramatic outbursts captured by Rosetta.

Thus, these scientists said, their new study suggests that comet evolution is likely to result first from shear stress, acting over a timescale of billions of years following the formation of comets. Later in a comet’s life, especially if the comet falls into an orbit that takes it near the sun, sublimation erosion takes over.

Evolution of Rosetta’s comet over 4.5 billion years. Image via ESA

It’s good to bear in mind that comet 67P/C–G isn’t the only dual-lobed object known to astronomers. On January 1, 2019, NASA’s New Horizons spacecraft flew close to an object beyond Pluto – nicknamed Ultima Thule – located in the Kuiper belt, where icy comets and other small bodies reside, far from our sun. New Horizons found that Ultima Thule also has a dual-lobed shape. See the image below.

There are similarities between the shapes of comet 67P/C–G and Ultima Thule, but there are also differences. The same stress structures aren’t as apparent in Ultima Thule, the scientists said. Time – and probably more visits to comets and Kuiper Belt objects by more spacecraft – will reveal whether comet 67P/C–G’s evolution is unique or common among the small bodies of our solar system. 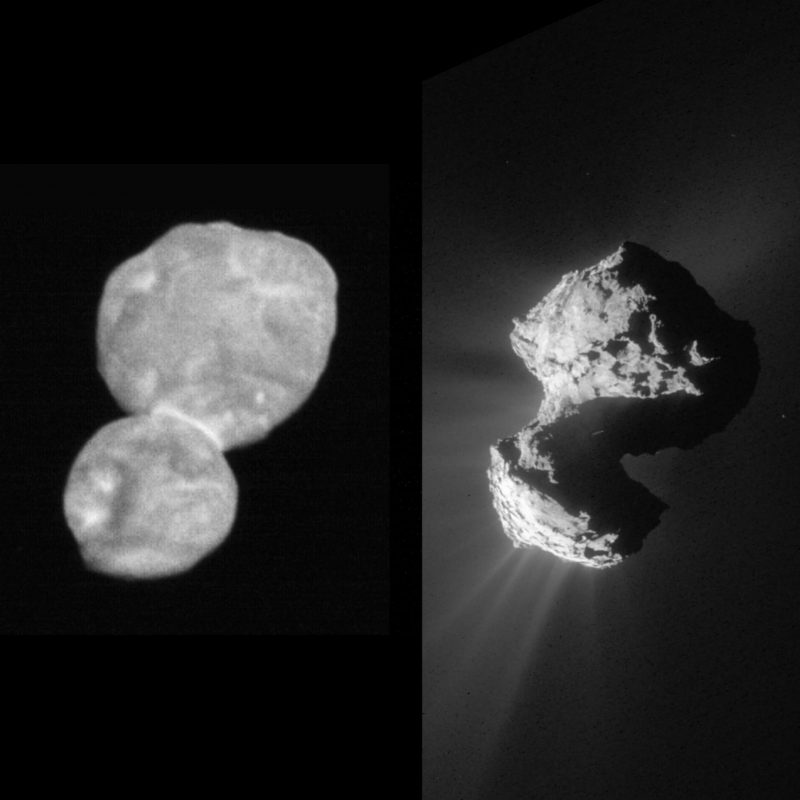 Ultima Thule versus comet 67P/C-G. They look really similar, don’t they? Both are icy objects that likely formed far from the sun. It might make you wonder how many other dual-lobed objects we’ll find in the far outer solar system. Via ESA.

Bottom line: Rosetta’s comet – aka comet 67P/Churyumov-Gerasimenko – looks like 2 icy balls apparently stuck together billions of years ago. A recent study, based on computer modeling, showed how the comet’s double-lobed structure guided its evolution.