The last quarter moon combined with Earth at perihelion should usher in a gentle neap tide, with little variation between high and low tide over the next few days. 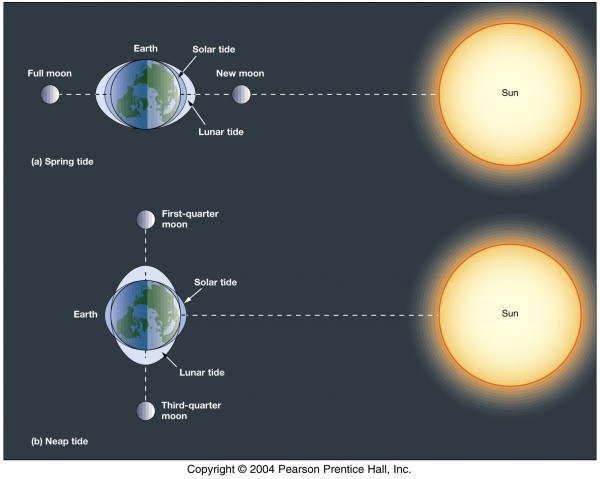 The moon reaches its last quarter phase and swings out to lunar apogee – its most distant point from Earth in its orbit – on January 2, 2016. In addition, the Earth sweeps to perihelion – its closest point to the sun in its orbit – on this same date: January 2, 2016. The combination of the last quarter moon at lunar apogee, and Earth at perihelion, should usher in a relatively even-keeled neap tide over the next few days.

Around each first quarter moon and last quarter moon – when the sun and moon are at a right angle to Earth – the range between high and low tides is least. These are called neap tides. Image via physicalgeography.net

On the other hand, at new moon or full moon the tidal influence of the sun and moon combine to create wide-ranging spring tides. The high tide soars way up high whereas the low tide sinks way down low.

Around each new moon and full moon – when the sun, Earth, and moon are located more or less on a line in space – the range between high and low tides is greatest. These are called spring tides. Image via physicalgeography.net

The moon’s tidal force is about two times greater than that of the sun. Yet, with the quarter moon closely aligning with apogee on January 2, 2016, the moon’s tide-generating force is less than average. Also, the sun comes closest to Earth for the year on January 2, 2016, so the sun’s tide-generating force is at its greatest at this time of year. Unless a storm surge throws a monkey-wrench into things, the ocean coastlines should display little change between high and low tide during the next few days.

In the meantime, enjoy the relatively level waters that accompany the early January 2016 neap tide!