Researchers in Europe have now confirmed the universality of free fall – which Einstein called his most fortunate thought – with extremely high precision. To do it, they spent 8 years tracking a triple star system containing a millisecond pulsar. 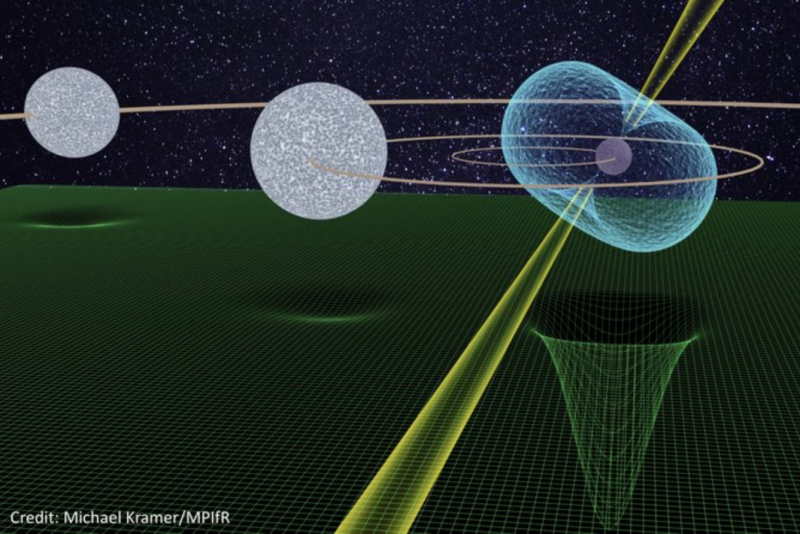 Artist’s concept of the system known as PSR J0337+1715. It’s triple system, consisting of a millisecond pulsar with 2 white dwarf companions. The green mesh illustrates the curvature of space-time caused by the different masses of these 3 stars. Size and distances of the 3 components are not to scale. Image via Michael Kramer/ MPIfR.

It’s part of science legend that Galileo dropped objects of different masses from Italy’s Leaning Tower of Pisa in order to contradict the long-held notion that heavier and lighter objects fall at different rates. In fact, all objects – irrespective of mass – fall at the same rate in a vacuum. This is called the universality of free fall, confirmed since then both on Earth and in space. Einstein himself called the universality of free fall his “most fortunate thought” since it led him eventually to the general theory of relativity. Now researchers in Europe have confirmed this fact of nature again, with extremely high precision, by tracking the motion of a triple star system containing a millisecond pulsar.

The findings were published in the peer-reviewed journal Astronomy & Astrophysics on June 10, 2020. A statement from the Max Planck Institute for Radio Astronomy (MPIfR) in Bonn, Germany, whose researchers participated in the study, said:

[The] findings – achieved by a new rigorous method and a combination of radio telescope data with latest insight from gravitational wave detectors – provide the strongest test ever of one of the most fundamental predictions of general relativity: that gravity attracts all objects with the same acceleration, without regard for their composition, density or the strength of their own gravitational field.

The pulsar in the system they studied – a highly compact neutron star – is called PSR J0337+1715. It orbits in a triple system with two white dwarfs, objects less compact than a neutron star, but more compact than our sun.

As described by general relativity theory, very compact objects like neutron stars curve spacetime many trillion times more strongly than planets or than our sun. These scientists said:

Perhaps more than any previous test, this result indicates that general relativity, based on the simplicity of Einstein’s most fortunate thought, really captures something fundamental about nature.

How can we understand what these scientists studied? Consider the universality of free fall in our own Earth/moon system – in the video below – which shows what’s sometimes called the Apollo 15 Hammer Feather Drop. The video shows that, on an airless world like the moon, a hammer and a feather fall at the same rate.

Much as in the video above, the new work is about a test of the universality of free fall. The scientists’ statement explained:

Pulsar PSR J0337+1715, located in the constellation Taurus, is a neutron star of 1.44 solar masses, showing regular radio pulses as it rotates 366 times per second around its own axis. It is a member of an unusual triple star system, in mutual interaction with two other stars, both of which are white dwarfs. A white dwarf is already quite exotic – a star typically the size of the Earth with a density of many hundred kilograms per cubic centimeter at its center. Compared to white dwarfs, a neutron star is truly extreme, having more mass than the sun squashed into a radius of just 12 kilometers [7 1/2 miles] and by this reaching densities of more than a billion tons within the volume of a sugar cube.

A research team, led by Guillaume Voisin (Jodrell Bank Centre for Astrophysics/UK and Observatoire de Paris), including MPIfR astronomers Paulo Freire, Norbert Wex and Michael Kramer, and astronomers from several institutions in France, used the Nançay radio telescope, located in the Sologne region of France, to precisely measure the arrival times of the radio pulses from PSR J0337+1715 over a time interval of eight years. They can show that neutron stars and white dwarf stars fall with the same acceleration within two parts per million.

What does it mean that the neutron star and white dwarf stars fall with the same acceleration? What does falling have to do with the orbits of objects in this triple system? In fact, you can look at objects in orbit around one another as being in a state of free fall. The object with less mass is falling toward the object with more mass. However, if the less massive object has enough tangential velocity – enough speed – it won’t fall into the other body. Instead, it’ll follow a curved path around the other body. The less massive object is then said to be orbiting the more massive one. To understand more about orbits, try this post on Newton’s cannonball.

What these scientists showed – to a high degree of precision – was that the orbits of the objects in the pulsar/white dwarf triple system are all “falling” at the same rate, as they pursue their mutual orbit. Since the pulsar is more massive than the white dwarf stars, this result confirms the universality of free fall: it shows that objects of different masses fall at the same rate. Guillaume Voisin commented:

Confirming it to this precision constitutes one of the most stringent tests of Einstein’s theory ever made – and the theory passes the test with flying colors. Moreover, the results also provide very stringent constraints on alternative theories of gravity, which compete with Einstein’s general relativity to explain gravity and, for example, dark energy.

After the 1905 publication of the special theory of relativity, Einstein started thinking about how to combine his new theory with gravity, since Newton’s law of gravity is incompatible with his new principle of relativity. In the fall of 1907, an idea came to his mind: that for someone in free fall it is as if gravity has been turned off, since due to the universality of free fall everything in his environment accelerates the same way.

This simple but profound insight led Einstein eventually to understand that gravity is a manifestation of curved space-time acting on all masses the same way, a concept which is at the heart of his general theory of relativity. He later described this sudden inspiration as ‘the most fortunate thought in my life.’

Read more about some of the applications of the new work, via MPIfR.

The scientists also pointed out that this triple system containing the pulsar PSR J0337+1715 illustrates something very profound. It shows that Einstein’s “ingenious insight” also applies to such extreme cosmic objects as neutron stars, which were discovered for the first time only 50 years after the publication of the general theory of relativity. Paulo Freire, another co-author from MPIfR, commented:

Perhaps more than any previous test, this result indicates that Einstein’s most fortunate thought really captures something fundamental about gravity and the inner workings of nature.

Bottom line: The universality of free fall describes the fact that objects of unequal mass fall at the same rate (in a vacuum). Einstein called the universality of free fall “my most fortunate thought.” Researchers in Europe have now confirmed this fact of nature with extremely high precision, using a triple star system containing the millisecond pulsar PSR J0337+1715.

Source: An improved test of the strong equivalence principle with the pulsar in a triple star system