Instead of rotating neatly on their axes, Pluto’s small moons Nix and Hydra are in a chaotic tumble as they orbit Pluto and its large moon Charon.

If you lived on one of Pluto’s small moons Nix or Hydra, you’d have a hard time setting your alarm clock. That’s because you couldn’t know for sure when, or even in which direction, the sun would rise. This surprising result is one of several about Pluto’s moons published today (June 4, 2015) in the journal Nature, and it’s illustrated by the computer animation above. In the animation, Pluto’s moon Nix changes its spin unpredictably as it moves through space, orbiting the double world Pluto and its largest moon Charon. The view is from the surface of Pluto as Nix circles the Pluto-Charon system. This is a time-lapse view of the moon, compressing four years of motion into two minutes, with one complete orbit of Pluto-Charon every two seconds (in contrast to the actual orbital period of 24.9 days).

The animation comes after comprehensive analysis of all available Hubble Space Telescope data showing that two of Pluto’s moons, Nix and Hydra, are wobbling unpredictably.

Scientists believe the other two small moons, Kerberos and Styx, are likely in a similar situation, pending further study. 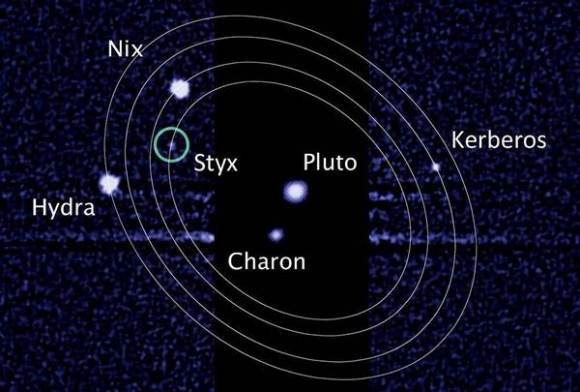 Hubble has provided a new view of Pluto and its moons revealing a cosmic dance with a chaotic rhythm. When the New Horizons spacecraft flies through the Pluto system in July we’ll get a chance to see what these moons look like up close and personal.

Why the chaos? Scientists say it’s because the moons are embedded inside a dynamically shifting gravitational field caused by the system’s two central bodies, Pluto and Charon, whirling about each other. The variable gravitational field induces torques that send the smaller moons tumbling in unpredictable ways. This torque is strengthened by the fact the moons are football shaped rather than spherical.

Mark Showalter of the SETI Institute in Mountain View, California, and Doug Hamilton of the University of Maryland at College Park, conducted the study. Showalter said:

Prior to the Hubble observations nobody appreciated the intricate dynamics of the Pluto system. Our report provides important new constraints on the sequence of events that led to the formation of the system.

Hubble’s monitoring of Pluto’s four outer moons has also revealed that three of them, Nix, Styx, and Hydra, are presently locked together in resonance where there is a precise ratio among their orbital periods. Hamilton said:

This ties together their motion in a way similar to that of three of Jupiter’s large moons. If you were sitting on Nix you would see that Styx orbits Pluto twice for every three orbits made by Hydra. 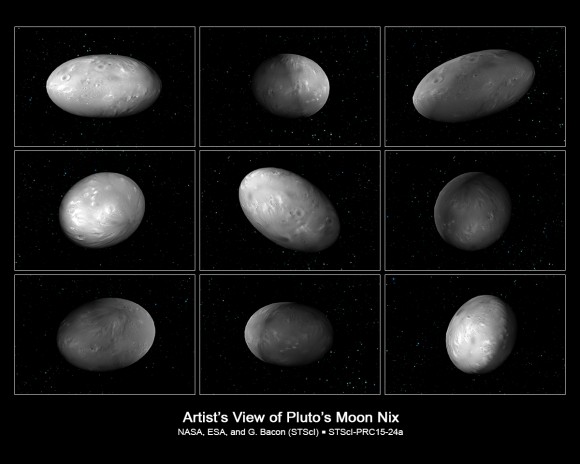 However, that does not necessarily mean that the system is on the brink of flying apart. We need to know a lot more about the system before we can determine its long-term fate.

In what Showalter called a “provocative result,” the Hubble data also showed that the moon the moon Kerberos is as dark as a charcoal briquette, while the other Pluto satellites are as bright as white sand.

NASA’s New Horizons probe, which will fly by the Pluto-Charon system in July 2015, may help settle the question of why one moon is asphalt-black moon, as well as the other oddities uncovered by Hubble. These new discoveries are being used in the science planning for New Horizons’ observations.

The chaos in the Pluto-Charon system offers insights into how planets orbiting a double-star might behave. Hamilton said:

We are learning that chaos may be a common trait of binary systems. It might even have consequences for life on planets in such systems.

Clues to the Pluto chaos first came when astronomers measured variations in the light reflected off of the two moons Nix and Hydra. Their brightness changed unpredictably. Showalter said:

The data were confusing; they made no sense at all. We had an inkling something was fishy.

His team analyzed Hubble images of Pluto taken during 2005-2012. They compared the unpredictable changes in the moons’ reflectivity to dynamical models of spinning bodies in complex gravitational fields.

Virtually all large moons, as well as small moons in close-in orbits, keep one hemisphere facing their parent planet. This means that the satellite’s rotation is perfectly matched to the orbital period. This is not coincidental, but the consequence of gravitational tides between moon and planet. (Hyperion, which orbits Saturn, is the only other solar-system example of chaotic rotation; it is due to the combined gravitational tugs of the planet and it largest moon, Titan).

Pluto’s moons are hypothesized to have formed by a collision between Pluto and another similarly-sized body early in the history of the solar system. The smashup might have flung material that coalesced into the family of satellites observed around Pluto today.

Pluto’s large binary companion, Charon, was discovered in 1978. The object is almost half the size of Pluto. Hubble discovered Nix and Hydra in 2005, Kerberos in 2011, and Styx in 2012. These little moons, measuring just tens of miles across, were found as part of a Hubble search for potential hazards to the New Horizons spacecraft flyby.

Researchers say that a combination of monitoring data from Hubble, New Horizons’s brief close-up look, and, eventually, observations with the James Webb Space Telescope will help settle many mysteries of the Pluto-Charon system. No ground-based telescopes have yet been able to detect the smallest moons. Showalter said:

Pluto will continue to surprise us when New Horizons flies past it in July. Our work with the Hubble telescope just gives us a foretaste of what’s in store. 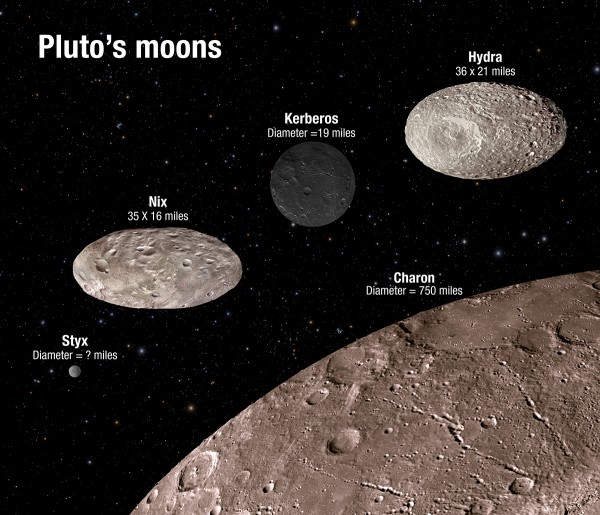 This illustration shows the scale and comparative brightness of Pluto’s small satellites. The surface craters are for illustration only and do not represent real imaging data. Image credit: NASA/ESA/A. Feild (STScI)

Bottom line: Pluto’s small moons Nix and Hydra are in a chaotic tumble as they orbit Pluto and its large moon Charon.