“Who would have thought that Pluto is a graffiti artist, spray-painting its companion with a reddish stain that covers an area the size of New Mexico?” 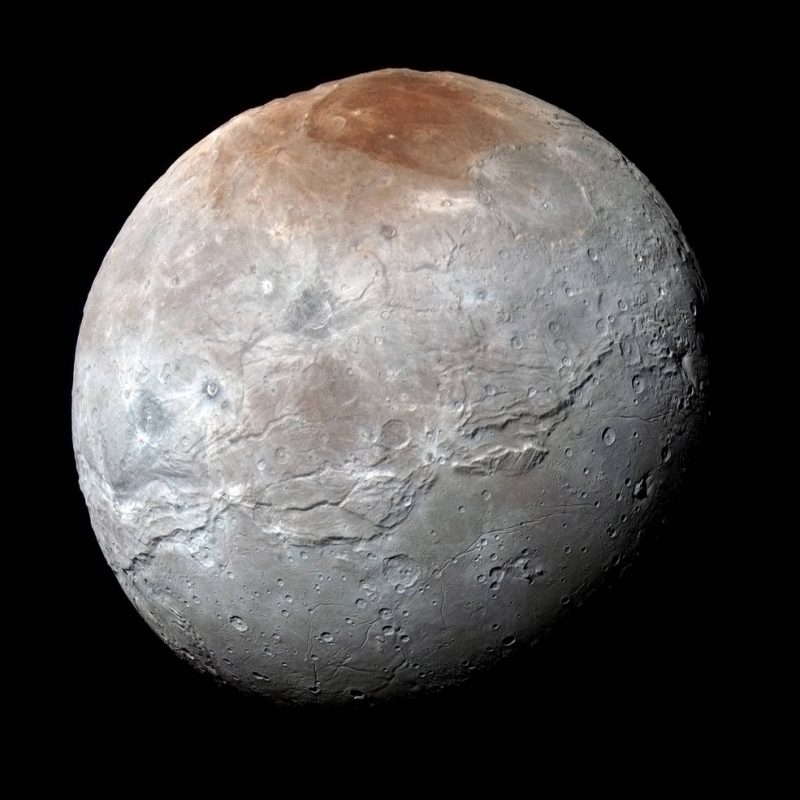 Fascinating news from dwarf planet Pluto and its largest moon Charon is still coming out, more than a year after the New Horizons spacecraft swept past the planet in July of 2015. A month before the historic flyby – likely the only such flyby of Pluto in some of our lifetimes – New Horizons’ cameras saw Charon’s north polar region as reddish. Now, after analyzing the images and other data sent back by New Horizons, scientists said on September 14, 2016 that Charon’s polar coloring comes from Pluto itself. They said that methane gas that escapes from Pluto’s atmosphere becomes “trapped” by Charon’s gravity. The gas freezes to the cold, icy surface at Charon’s pole. Then a chemical process occurs by which ultraviolet light from the sun transforms the methane into heavier hydrocarbons and eventually into reddish organic materials called tholins.

The scientists’ work is published in the peer-reviewed journal Nature.

Will Grundy is a New Horizons co-investigator from Lowell Observatory in Flagstaff, Arizona and lead author of the paper. He said in a statement from NASA:

Who would have thought that Pluto is a graffiti artist, spray-painting its companion with a reddish stain that covers an area the size of New Mexico?

Every time we explore, we find surprises. Nature is amazingly inventive in using the basic laws of physics and chemistry to create spectacular landscapes.

The NASA statement how Grundy’s team reached their conclusions about Charon’s red pole:

The team combined analyses from detailed Charon images obtained by New Horizons with computer models of how ice evolves on Charon’s poles. Mission scientists had previously speculated that methane from Pluto’s atmosphere was trapped in Charon’s north pole and slowly converted into the reddish material, but had no models to support that theory.

The New Horizons team dug into the data to determine whether conditions on the Texas-sized moon (with a diameter of 753 miles or 1,212 kilometers) could allow the capture and processing of methane gas. The models using Pluto and Charon’s 248-year orbit around the sun show some extreme weather at Charon’s poles, where 100 years of continuous sunlight alternate with another century of continuous darkness. Surface temperatures during these long winters dip to -430 Fahrenheit (-257 Celsius), cold enough to freeze methane gas into a solid.

The methane molecules bounce around on Charon’s surface until they either escape back into space or land on the cold pole, where they freeze solid, forming a thin coating of methane ice that lasts until sunlight comes back in the spring.

But, the scientists’ statement explained, while the methane ice quickly sublimates away, the heavier hydrocarbons created from it remain on the surface.

The models also suggested that in Charon’s springtime the returning sunlight triggers conversion of the frozen methane back into gas. But while the methane ice quickly sublimates away, the heavier hydrocarbons created from this evaporative process remain on the surface.

Sunlight further irradiates those leftovers into reddish material – called tholins – that has slowly accumulated on Charon’s poles over millions of years. New Horizons’ observations of Charon’s other pole, currently in winter darkness – and seen by New Horizons only by light reflecting from Pluto, or “Pluto-shine” – confirmed that the same activity was occurring at both poles.

This study solves one of the greatest mysteries we found on Charon, Pluto’s giant moon. And it opens up the possibility that other small planets in the Kuiper Belt with moons may create similar, or even more extensive ‘atmospheric transfer’ features on their moons. 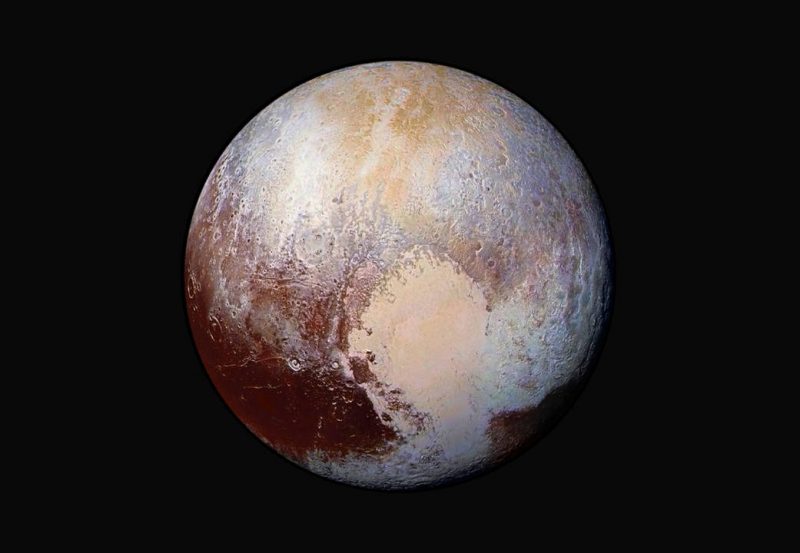 Bottom line: After analyzing the images and other data sent back by New Horizons during its 2015 flyby of Pluto, scientists said on September 14, 2016 that the red color at Charon’s north pole originates as methane gas escaping from Pluto itself.