Astronomers have spotted a classical nova outburst in a type of variable star that involves a white dwarf orbiting a main sequence star. Nova Reticulum 2020 has been briefly visible from the Southern Hemisphere.

A nova is a star that suddenly pops into view. Early stargazers thought they were new stars. Today, we know differently. Image via Ernesto Guido (@comets77 on Twitter).

Veteran comet hunter Robert McNaught from Coonabarabran, Australia, must have been perplexed – and then surprised – and then delighted when he noticed something peculiar on CCD images of the night sky, taken July 15, 2020. It was a faint, but visible star where none had appeared before. Such a star is called a nova, from a Latin word meaning new. This one is in front of the southern constellation Reticulum. Once confirmed by other astronomers, and reported in The Astronomer’s Telegram on July 16, the object was quickly announced to the world’s community of variable star observers as Nova Reticuli 2020 (N Ret 2020).

It’s a rare find: a nova visible to the eye! 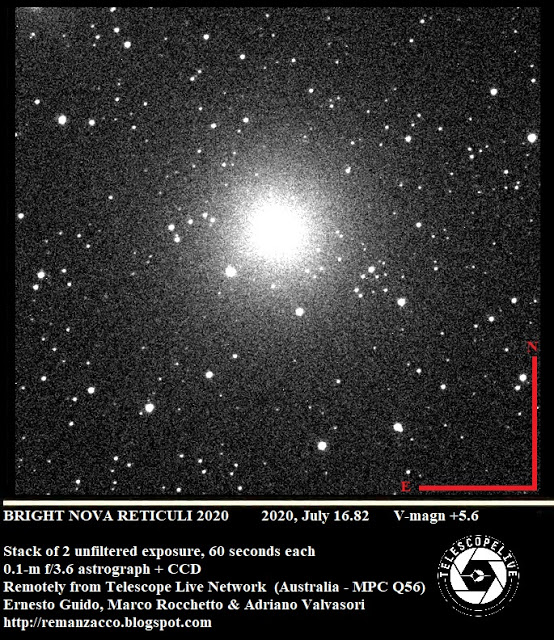 Astronomers have determined that this outburst is of the sort called a classical nova. That is, it’s created in a double-star system where one star is a white dwarf and the other is an ordinary main sequence star, not dissimilar from our sun. These two stars are close together in space, orbiting one another on a timescale of only hours. Because they’re close – and because the white dwarf is a collapsed object with very powerful gravity (a teaspoon of white dwarf material would weigh several tons) – hydrogen from the main sequence star is drawn into an accretion disk around the white dwarf. Eventually, this hydrogen piles onto the surface of the white dwarf. As explained on the website Cosmos from Swinburne University:

As more hydrogen (and helium) is accreted, the pressure and temperature at the bottom of this surface layer increase until sufficient to trigger nuclear fusion reactions [the same process that causes our sun and most other stars to shine]. These reactions rapidly convert the hydrogen into heavier elements creating a runaway thermonuclear reaction where the energy released by the hydrogen burning increases the temperature, which in turn drives up the rate of hydrogen burning.

The energy released through this process ejects the majority of the unburnt hydrogen from the surface of the star in a shell of material moving at speeds of up to 1,500 km/s. This produces a bright but short-lived burst of light – the nova.

A classical nova outburst can occur again and again in a system of this kind.

Nova Reticulum 2020 is associated with a known object in the database of the American Association of Variable Star Observers, labeled MGAB-V207 and categorized as a cataclysmic variable star. These sorts of stars are known to undergo classical nova outbursts due to mass transfer between a main sequence star and a white dwarf. 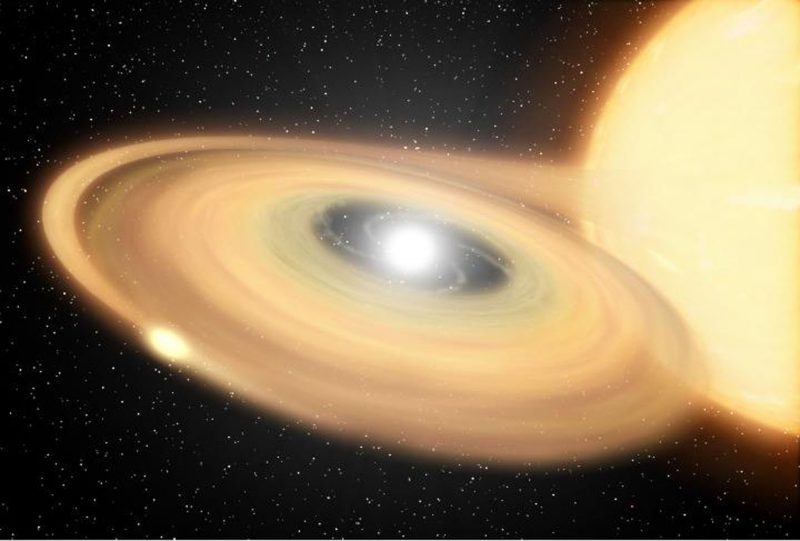 In a classical nova, a dense white dwarf pulls material from a companion star. The material piles up on the white dwarf’s surface until thermonuclear processes begin, creating an outburst. Image via NASA/ JPL-Caltech.

Can you see Nova Reticuli 2020? Possibly, if it hasn’t faded yet, and if you live in the Southern Hemisphere, where the constellation Reticulum can be seen. On July 17, writing at Astronomy.com, Alison Klesman said Nova Reticuli 2020 was shining at around magnitude 5.

That is, it’s visible to the eye, but only barely.

If it’s still visible to the eye, you will need a very dark to see the nova. If you have that – and a constellation chart to show you how to find Reticulum – look first for the bright stars Alpha and Gamma Doradus, shown on the chart below (apologies for the blurriness of the chart; be sure to view it larger). 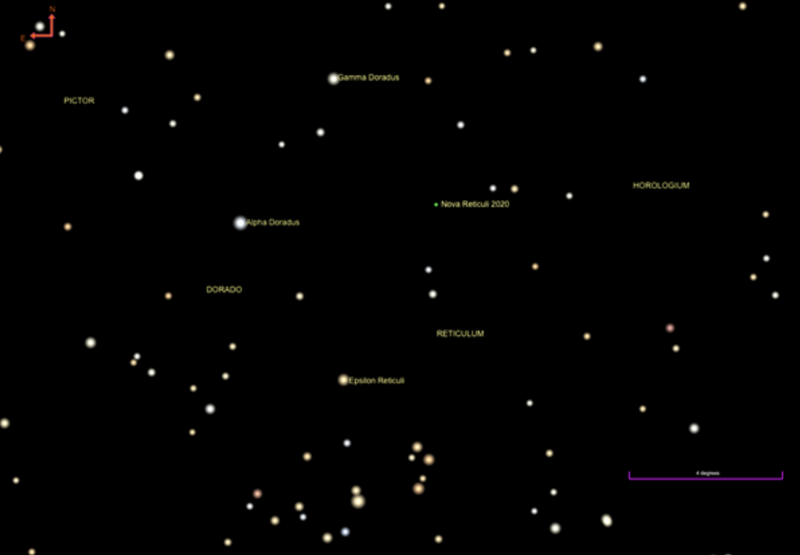 View larger. | If you live in the Southern Hemipshere, you can see the constellation Reticulum and the nova. You can pinpoint Nova Reticuli 2020 by looking roughly 5 degrees west of magnitude 3.3 Alpha Doradus and 4.25 degrees southwest of magnitude 4.3 Gamma Doradus. Notice that these 2 stars make a triangle with the nova. If the nova has gotten fainter, try using binoculars to bring it into view. Image via Alison Klesman/ Astronomy.com. 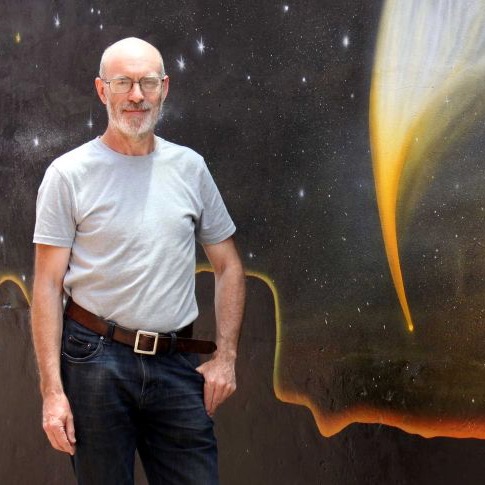 Congratulations to comet hunter Robert McNaught, who was the first to spot Nova Reticuli 2020! Image via Abc.net.au.

Bottom line: Astronomers have spotted a classical nova outburst in a type of variable star that involves a white dwarf orbiting a main sequence star. Nova Reticulum 2020 has been briefly visible from the Southern Hemisphere. At this writing, we do not know if it is still visible.

Via The Astronomer’s Telegram

Via the American Association of Variable Star Observers