No commands to Mars craft in late July

NASA says to blame the sun for its moratorium on sending commands to Mars from July 22 to August 1.

Mars rarely passes directly behind the sun from Earth, and it won’t this year. But, for a period centered on July 27, 2017, it’ll be near the sun on the sky’s dome, crossing the sky with the sun during the day. Astronomers call this location of Mars in our sky a conjunction, and, around every Mars conjunction with the sun, NASA has a moratorium on sending commands to its Mars spacecraft. On July 14, NASA announced that this year’s moratorium will happen from July 22 to August 1. Chad Edwards, manager of the Mars Relay Network Office at NASA’s Jet Propulsion Laboratory, Pasadena, California, said:

Out of caution, we won’t talk to our Mars assets during that period because we expect significant degradation in the communication link, and we don’t want to take a chance that one of our spacecraft would act on a corrupted command.

We will continue to receive telemetry, so we will have information every day about the status of the vehicles.

Loss or corruption of some bits of data coming from Mars is anticipated. The data will be retransmitted later.

NASA said that the upcoming total solar eclipse on August 21 will give people a visible lesson on why signals between Earth and Mars can be corrupted, even when Mars isn’t directly behind the sun.

The sun’s corona, which always extends far from the surface of the sun, becomes visible during total eclipses. It consists of hot, ionized gas, which can interfere with radio waves that pass through it. 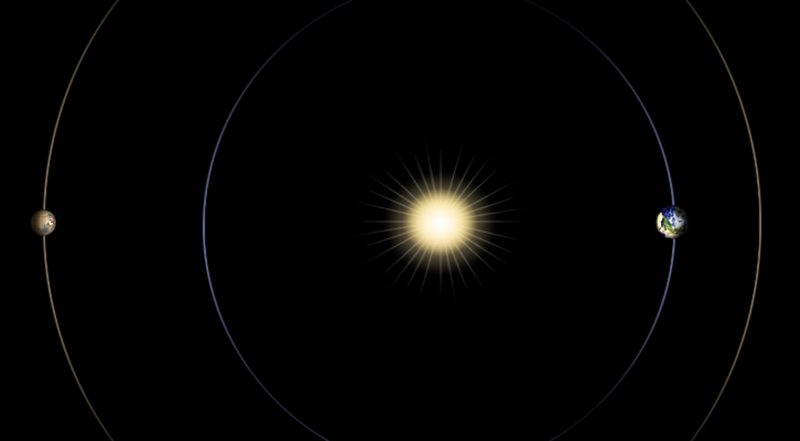 This diagram illustrates the positions of Mars, Earth and the sun during a period that occurs approximately every 26 months, when Mars passes almost directly behind the sun from Earth’s perspective. It’ll happen in 2017 on July 27. Image via NASA.

NASA said its teams that operate Mars orbiters and rovers have been preparing for weeks in anticipation of the upcoming moratorium on commands. They’re currently determining the most useful sites for the rovers Curiosity and Opportunity to remain productive during the solar-conjunction period. Mars Program Chief Engineer Hoppy Price, of JPL, said:

The vehicles will stay active, carrying out commands sent in advance. Orbiters will be making their science observations and transmitting data. The rovers won’t be driving, but observations and measurements will continue.

NASA said all of its spacecraft on or orbiting Mars have experience from at least one previous Mars conjunction.

All of these spacecraft are now veterans of conjunction. We know what to expect. 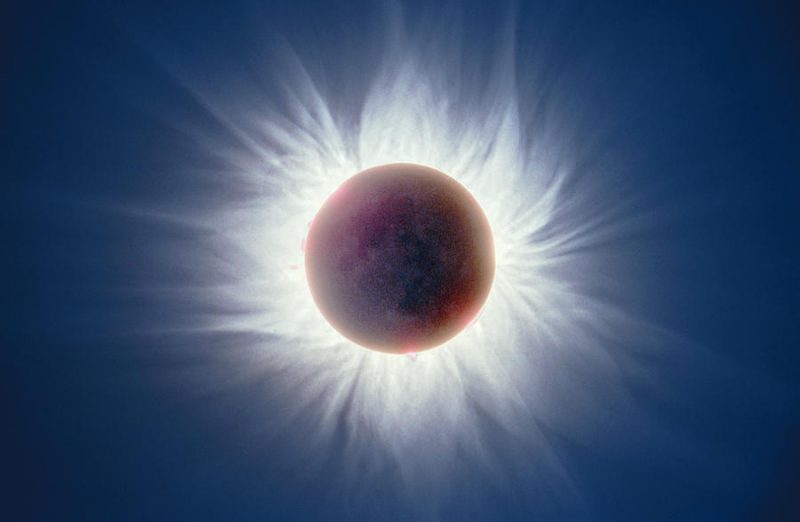 Composite image of a 1999 solar eclipse by Fred Espenak. Read his article on the August 21, 2017 total solar eclipse, first one visible from contiguous North America since 1979. In this image, the white part around the eclipsed sun is the solar corona. It’s this corona that’ll be interfering with radio signals from Mars in late July 2017, when Mars is near the sun on the sky’s dome.

Bottom line: Mars will be in conjunction with the sun on July 27, 2017. NASA will refrain from sending commands to its spacecraft between July 22 and August 1, so that the spacecraft don’t act on commands corrupted by passing too near the sun.

EarthSky’s guide to the bright planets in July